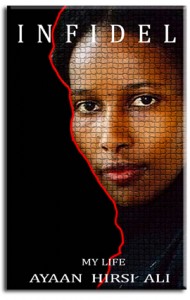 A group of friends and I discussed this book recently and our discussion was long and vigorous but, interestingly, revolved more about the issues raised by the book than the book itself. Hirsi Ali might well be pleased by that. By her own admission she is a passionate advocate of a single issue: the need to free women from the oppression of cultural customs that are violent, intimidating and destructive. That her autobiography could generate interest, passion and, most especially, debate, about the kinds of difficult issues many people and cultural groups find easier to ignore than address might well justify the dangerous over-exposure the book has brought her. She now lives hedged in by close police protection.

From a literary point of view, the book is well written. The narrative moves quickly; the author doesn’t allow extraneous political or religious detail to slow the pace of her story. There is nothing plodding about it; on the contrary, she manages to instil a degree of suspense and breathless uncertainty into a story where we already know the relatively happy ending. The language is simple without being unsophisticated. Her sentences are not cluttered with cumbersome language or convoluted constructions. One has the feeling that she writes more or less as she speaks—and all this from a non-native English speaker.

Infidel actually pursues three narratives: the first autobiographical, beginning with her childhood in Somalia; the second political, addressing the question of freedom and human rights for women; the third religious, focusing on Islam and especially the role of violence within some Muslim cultures. It’s easy to get caught up in the autobiographical narrative, especially in the description of her excision when she was five. That’s the point when one has to stop reading and spend time recovering from the horror of the description, let alone of the practice itself.

It’s also the point when attention broadens from the autobiographical narrative to include the complex cultural, political and religious issues of the other two narratives. The shift occurs via pictures of two prominent women in the story—blurred pictures of her grandmother and mother, both marked by ambivalence. Clearly, these women’s lives were governed by frequently unforgiving and cruel cultural attitudes. The grandmother at least is perhaps best understood as a simple uneducated woman whose world had never broadened beyond family and village and who would be unlikely to question values giving her value and significance even if embodying harshness and cruelty.

But the mother’s case is not so simple. She had not had such a confined life. She had education, and had lived and worked independently before marrying. Her relationship with her husband seems to have started well but deteriorated over time with more downs than ups and she appears to have lived in a state of simmering anger over his absences and her isolation and enforced dependence on the charity of others. Hirsi Ali’s picture is of a woman who is a victim of culture and circumstances she was unable to change. Perhaps she acted as best she could within the confines of her cultural group and, powerless, retreated into anger and bitterness. Her outlet for her frustration was beating the children, particularly her older daughter, Ayaan.

It seems hard to understand how she could beat and abuse her daughter so mercilessly. How could she fail to protect her from harsh cultural mores? Certainly, she was outraged by the grandmother’s organising the two girls’ excision and the boy’s circumcision without permission and in defiance of the parents’ ban on the practice but her anger—at least as reported by Hirsi Ali—seems to have been trumped by the grandmother’s passionate defence of culture. We hear little more about it after the first flush of rage. Perhaps there is some kind of self-protection in resigned acceptance of something she couldn’t change but she could have focused her anger against the cultural practice rather than collapsing into resigned acceptance.

Hirsi Ali has certainly rejected her mother’s example and stayed with anger as a response to cultural (and religious) confines. She contends that silence, along with well-meant but short-sighted and sugar-coated liberalism, contributes to the perpetuation of cruelty and injustice. Passion and advocacy do not always produce the best results though the latter certainly needs the former if change and progress in any field is to be achieved. In Hirsi Ali’s case, there is considerable doubt as to whether her methods best suit her cause. She declared herself apostate which was inevitably going to bring her into conflict with conservative Islam. One could argue that she ought to have realised that, in publicly abandoning Islam, she would weaken her capacity to champion Muslim women and their rights. We cannot know whether the outcome would have been different had she kept silent about losing faith (and lived with personal hypocrisy) and simply continued with the political battle. Maybe all we can say is that taking an anti-faith position probably gave ammunition to those threatened by her criticism.

Infidel is a challenging book. Many of us reject hardline positions that pit religion against religion; indeed, some might have thought this a thing of the past, a past in which compassion and mercy had little strength against the power of state and religious institutions. Maybe we thought we lived in more forgiving, tolerant and gentler times. What Hirsi Ali is saying is, in effect: yes, this is tough; yes, we’d all prefer to think about something else. Yes, we’d all like to believe that tolerance and mercy rule. But they don’t and we can’t allow ourselves to be suborned by fine words and lofty principles. If we believe in the cause of liberating women from oppression and violence then we must take a stand and say ‘no’. Neutrality is not possible which is exactly what South African Anglican Bishop Desmond Tutu said a long time before Hirsi Ali: ‘Whenever people say to you, “in this situation, we are neutral”, you can always know they have taken a decision to side with the powerful.’[1] And when they do, adds one scholar, ‘History is littered with the bodies of those broken as the world watched.’[2]

So this is the challenge of Hirsi Ali’s book: which of us is giving the nod to injustice?

In her work on suffering, Dorothee Soelle makes two statements pertinent to Hirsi Ali’s life, the women who shaped it and the battle she has made her life’s work.

First, Soelle says that when we speak out on their behalf, the marginalised and forgotten are encouraged to stand up for their rights.[3] There are, she continues, three things necessary to their renewal—new language, new life, and new communities—but these are only effected by re-ordering all those cultural habits, traditions and moral values that have created victims and crushed life and possibility out of them.

Second, of those who would perpetuate those crushing traditions, Soelle writes:

Anyone who lives with a static world view … that is, one that is intent on imitation and repetition of the past, cannot see learning and change as the most important things that one can achieve in life. [Their] attitude toward suffering cannot get beyond acceptance and resignation. Only where change itself is comprehended as an essential human value and acknowledged by society … can the passive attitude toward suffering change.[4]

Think of Ayaan Hirsi Ali’s grandmother perpetuating practices that might have been harsh but which were her only source of self-worth. Think of Ayaan Hirsi Ali’s mother beating her daughter in rage and wild frustration. Both of these women were victims without the language to express pain and rebellion. Think of Ayaan Hirsi Ali herself trying to break the pattern of the past in her own life for the sake of countless other women’s lives and we come to the raison d’être of her book. From this perspective, perhaps the point is not where the truth lies in the autobiographical narrative she presents (some of her family disputes her tale) so much as the controversy and debate she provokes. The outcome of that might just be more important than the book itself. Only time and the rescue of women from oppression will tell.

In the meantime, we are left with the challenge of her book: which of us is giving the nod to injustice?