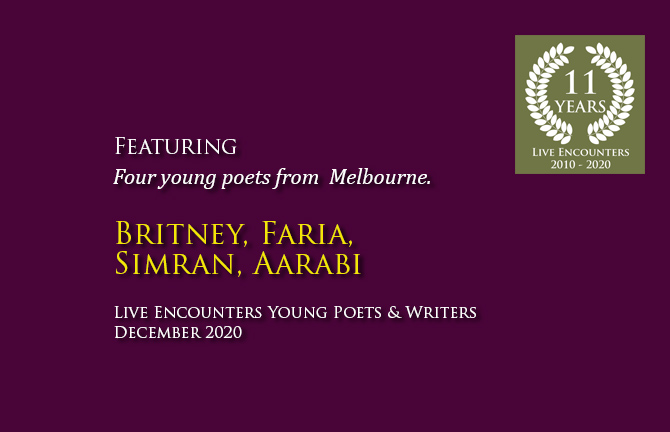 The following poems have been written by students aged between 15 yrs and 17 years,
of Melbourne, Australia.

My sword and hand are all but one
Sworn to speak for a sorrowful tongue
Which once bore fruits of truth and grace
Of honesty and trust… misplaced
Old Honour has died, so long defaced
Both sport and profit amounted to none


Slick words now fall to ears half deaf
Pegs tuned to play in some broken clef
Naught is heard but the footsteps of rain
As Cyprus heaves in settled pain
Of diplomacy, too soon slain
Masterless, Life’s music hangs, bereft


Old friends not as friendly as they are old
Now lost to daws, hearts and gold
My sleeves have wrinkles like my enemies’ sheets
Their dreams wrecked with faltering fleets
Of ships once virtuous now drenched in pitch
If only they remembered the stories I told


To warn of deception is to wake the deceived
I knew naught of the lies that they had received
It seems that in serving their own reputations
Even Generals forget their true motivations
Before thinking, they spew out cold accusations;
Falsehoods too pestilent to be retrieved


Perhaps ancient, but my words are not slow
My command was once lost, to men who now throw
Their cloaks to citizens, who bow in their stead
Fast to call treason once duty has fled
Their praise fell from “honest”, to “knave, dog and dead”
So here lies an ode from the man you think you know
As Jealousy’s harbinger, and its thief –

Britney is a student from Melbourne, Australia. Her poem is inspired by Shakespeare’s careful craftmanship of the character Iago from “Othello” and takes an ironic spin on the frequent commentary and literary analysis that suggests his malignancy may be unmotivated. Instead, the following poem explores the possibility that he, the master of mischief, may indeed have been slighted and deceived by others instead.

Land of Poems and Pomegranates

I had fallen in love in my childlike way
with cheek-pinching and cosy embraces –
just as sweet and warm
as that familiar, wafting
aroma of fresh bread
overpowering my senses.


I had fallen in love in my childlike way
with shimmering snowflakes drifting
down to my expectant tongue,
pristine, white blankets
in bustling streets whose alleys
serve as children’s soccer fields.


Yet I could not tell you what I loved best
and my love swelled and swelled,
a burgeoning balloon on a string
filled with bittersweet emotions.
It tugged at my small heart as I waved,
threatening to explode.


Overcome with emotion,
I allowed myself to weep.
I hid, as children do,
hoping that I could stay
with my roots running deep
into the soil of my land.


Wherever I go, I always know
that this wine-red blood in my veins
contains verses from the greats –
the words of Rumi and Hafez and Khayyam.
It sings of the rise and fall of kingdoms,
tells stories from antiquity.


My mind is woven like a rug –
immortal in its colourful intricacies,
patterns, symbols and texture,
but keeping certain flaws.
It remembers the calloused hands
of the women who toiled at its loom.


My mane is that of a Persian cat.
My scent is that of rosewater.
My lips are the colour of pomegranates.
My body is a stark mountain,
reflecting sunlight from its peak.

I keep the music of the mystics in my soul
and following that rhythm,
I whirl on –
but when all is still, I stop and stare,
and whisper to myself,
“We used to live there.”


Faria, 15 years old, is a Year 10 student from Melbourne, Australia. She enjoys playing clarinet and piano, listening to music, watching films (particularly classics and horror movies!), playing soccer and netball, and reading. She enjoys reading from a range of genres but one of her favourite novels is The Picture of Dorian Gray by Oscar Wilde. Her favourite poets include Leonard Cohen and Wisława Szymborska as well as a number of Persian poets, some of whom are mentioned in her poem. This piece was inspired by her Persian culture and personal experiences in Iran, as she moved to Australia at a young age but is still very much connected to her Persian heritage. It includes references to aspects of Iran’s geography, history, art and literature. She hopes that this poem will allow her to share the Persian side of her culture and identity with a wider audience.

I was among the usual stampede
Of girls in blue when I sat down
Unaware that when I joined this sea
Again I would be changed,
I would be hurt.

The drumming of leather shoes
Softened and a quilt of silence
Blanketed us as she glided to the
Center of the stage and raised her
Violin to her shoulder.

The first sounds pierced through
The silence, swelling and blooming,
Steeping every corner in the room.
An audience shivered, too far to see
That below her sealed eyes her eyeballs rolled
To the other side of the earth where a tide
Tore across a sheet of pristine sand.

This music pierced me, which each
Master stroke I bled a little more,
It went a little deeper as she tore
Through space, cutting tunnels for each note
To travel through.
Those tiny, vibrating hairs that shook a school
Broke something in me – something even more
Delicate than her tiny fingers slipping through
The strings, plucking music out of still air.

The thunder of applause
Filled the wake of her
Music. And as I rose
I felt a kind of pain
Bloom from this refrain.

Simran, 17 yrs old, is a Year 11 student from Melbourne, Australia. She loves to go for walks in the rain, the smell of old books, and watching the sun melt in the evening. Her favourite authors are Sandra Cisneros and Anthony Doerr. This poem was inspired by her love for music and its mysteries.

The Sun and His Lover

This tale is the cost of loving a god
It is this; Icarus touch-starved, Apollo longing
Naive yearning coalesced
With desire and hubris
These stories end the same,
in flames.


Bony, boyish fingers beckon the blazing sun
Glistening with the sweat of a thousand lovers
Strands of dark hair dancing softly
Coerced by the rush of the wind that
Cocoons the dreamer in his descent
Illuminated by heavenly fire, you are
incandescent Icarus, iridescent Icarus
Ill-starred Icarus.


Icarus, my love
Why did you yearn for me,
Long for me so very much
That you would lose all your wits
Hurtle into this feverous frenzy
Just to bask in my affections


Icarus, my darling
I know there is nothing beautiful about
4th-degree burns,
or plummeting at
three hundred and twenty-five kilometres per hour
But you have never looked
as lovely as you did
In your fall from grace
Shining like a flood of unfiltered ichor
You were the sun, and it was I,
Crashing into you

Icarus, you dreamer
How was I to know we would become a myth
That they would have it all wrong
That they would forget to pen down
The seconds when I held you in my arms
When my kiss singed your lips
And still you smiled
An instant of bliss and a lifetime of death
In a single embrace

The poets will call you arrogant, devoured by hubris
The songs will say you plummeted in agony
You flew, Icarus, even as you fell
Head thrown back, and mouth wide with laughter
The epics forget who you were before the fall
Forget that you were made of magic, of
Crooked grins and brilliant inventions
Eyes like runny honey in the sunshine
Liquid melanin, your eyes
That should have been enough for me to hold on to


Icarus, I was a fool to have watched
As your fingers clutched at the air
As they met the empty promise of my love
As your wings ignited,
As my heat seared through skin, flesh, bone
I could have caught them, Icarus
Your hands
Gentle, now scarred
Why didn’t I?
This is why you should not love a god.

Dearest Apollo,
You beckoned me from the darkness of the Labyrinth
What choice did I have, but to ache for your light?
There is nothing worse than destruction by a lover
to drown in your own creation,
to be unmade.

I will remember the way my ribs pressed
Against the underside of my skin
As I struck the ocean surface,
pain bleeding into numbness
I will remember reaching terminal velocity,
Time slowing to leave me to my thoughts
Will remember awaiting death patiently

Yet, I will remember the deliverance it gifted me
When I brushed fingertips with the sun
I will remember sun-streaked locks and golden eyes
sending me to my demise.

Mortal and god, bound by yearning
Given a single moment of catharsis.
Was it worth it, Icarus?

Aarabi is a 16-year-old Year 10 student from Melbourne, Australia. Aside from writing, she enjoys playing and making music as well as baking! Currently, her favourite author and poet are Haruki Murakami and Richard Siken. This poem, retelling the myth of Icarus as a love story, was inspired by an artwork that depicted Icarus and the sun as two people in the sky. Aarabi takes a great interest in mythology and classics, and was inspired to retell the Icarus myth having loved Madeline Miller’s retellings in ‘Circe’ and ‘The Song of Achilles’.