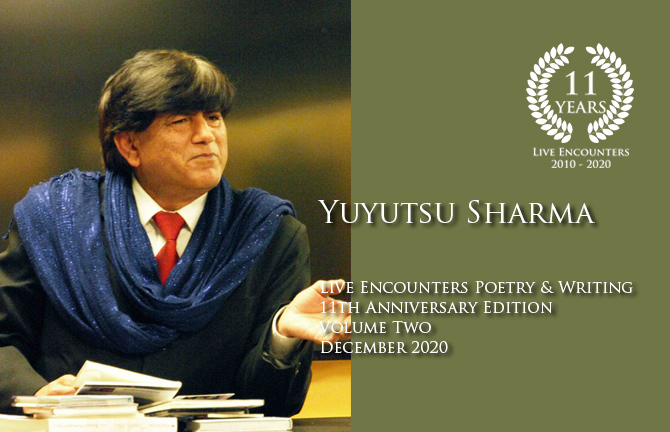 Recipient of fellowships and grants from The Rockefeller Foundation, Ireland Literature Exchange, Trubar Foundation, Slovenia, The Institute for the Translation of Hebrew Literature and The Foundation for the Production and Translation of Dutch Literature, Yuyutsu Sharma is a world renowned Himalayan poet and translator. He has published ten poetry collections including, The Second Buddha Walk, A Blizzard in my Bones: New York Poems, Quaking Cantos: Nepal Earthquake Poems, Nepal Trilogy, Space Cake, Amsterdam and Annapurna Poems. Three books of his poetry, Poemes de l’ Himalayas, Poemas de Los Himalayas and Jezero Fewa & Konj  have appeared in French,  Spanish and Slovenian respectively. Half the year, he travels and reads all over the world and conducts Creative Writing workshops at various universities in North America and Europe but goes trekking in the Himalayas when back home. Currently, Yuyutsu Sharma is a visiting poet at Columbia University and edits, Pratik: A Quarterly Magazine of Contemporary Writing. https://niralapublications.com/nirala-authors/yuyutsu-rd-sharma/  https://yuyutsurdsharma.blogspot.com/

From my work-in-progress, In God’s Messy Workplace: The 2020 Poems

It’s not good to name
such a being,
utter its presence aloud
or refer to its current avatar
raging in the veins
of the globe tonight.


Or to name
any of the ‘lower’ species,
as my mother
would have admonished me
in her fractured voice
in my in the early hours
of my childhood.

Name it and  next moment
you would see it at your door
tossed back from the hills
hungering for its share of gloom.

It’s inauspicious
to utter its name,
the very first thing
in the morning.

‘What’s it called, Jhai?’
I ask aloud, curious.
She places her slender
fingers on my lips
to hush me up…

I see a hairy creature
scuttling in our backyard,
Nangal Township,
my father’s hillside town,
crystal airs of the verdant valley
filling my morning lungs.


‘You can’t utter its name,
not early in the morning,
you could say —
Hanumanji or Pawanputra,
son of the winds,
something sacred,
a Yeti thing that comes
along your mind
but never ever
utter its real name.’


I got it all, the monkey that
came every morning to eat guavas
in our garden was Hanumana.
It’s the naming that
mattered the most,
especially in the beginning of a day.


It’s the naming that made us
sweat through the dark holes
to discover the round emptiness
from his large earlobes of wisdom.

Naming them is tempting
them into our world,
naming things
made all the difference
and on top of it,
naming them aloud
mattered all the more.

Beasts crawl
into the streets of my city.

Mornings move along
the dying light and dissolve

into empty bleak nights
that flush out a rancid daylight,

troublesome to a human soul.

One house, five rooms,
one roof

no roots snarl
out of the inner yards

slim serpents come out
from the discarded lodges

rotting out of a longing
for an arrival of their ultimate owner.

Bodies drenched
in the smells

danker than the stenches
that reek out of the city’s

Mother’s day
I don’t have anything
to post on my wall today.
I see them debating
forgotten frontiers of humanity’s walk.
Lysol, Liberty, Languages
Lighting lamps, banging plates
pranks to raise demons
from their secret dungeons.

Mother’s day.
I don’t have anything
to post today.
Only shady sketch
of my loud betrayals
slowly eating the innards
of my fast fading body
where the Lord rests,
keeping a vigorous
record of my misgivings.

I sit on the rooftop
and watch snow peaks

appear out of
a swarm of clouds,

a revolution,
a view of glistening world

ancient enough
to make me forget

the insults the spring
has suffered this year

in my beloved cities.

I turn to the canyons
across the neighboring hill ranges

drowned in mists
to reach the mule paths

that would make me alive
and  burn the grasses

of my life’s guilt.