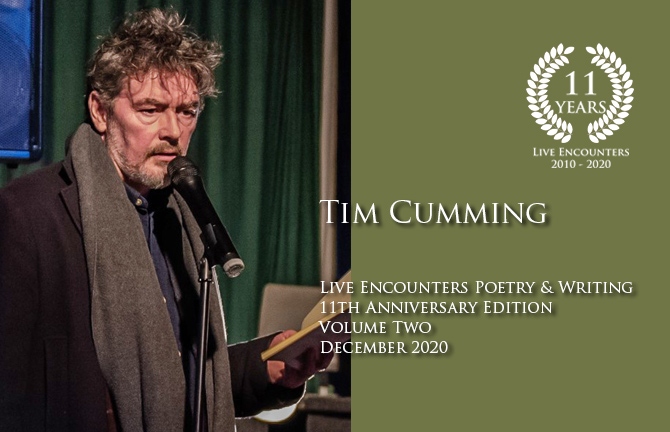 Tim Cumming’s collections include The Miniature Estate (1991), Apocalypso (1992, 1999), Contact Print (2002), The Rumour (2004), The Rapture (2011) Etruscan Miniatures (2012), Rebel Angels in the Mind Shop (2015) and Knuckle (2019), chosen as one of the books of the year by The Irish Times. His work has appeared in numerous anthologies, including The Forward’s Poems of the Decade, the WS Graham anthology, The Caught Habits of Language and Bloodaxe Books’ anthology of poetry from Ireland and the British Isles, Identity Parade. He made the BBC4 documentary Hawkwind: Do Not Panic in 2007, and has shown his film poems at cinemas and festivals worldwide. He writes regularly about music and the arts and his paintings have been exhibited at Slader’s Yard in Dorset and the Rowley Gallery in west London. They can be seen at https://timcumming.wordpress.com/

“There’s a flood of evoking going on here yet its mix of the personal with a wider sense of the world is quietly astonishing.” – Steve Spence, Litter Magazine on Knuckle

“Cumming’s poems are alive to the moment and what constitutes them. This is perceptive and assured writing from and about the real world.” – Rupert Loydell, Stride, on Knuckle

How to describe the lineaments of the temple? Some working conditions are worth preserving in their own formaldehyde. There’s an alchemist’s laboratory in a castle to a town about 80 kilometres from Prague, fully stocked with the glassware and hardware of the cunning man. In Hammersmith stands the last surviving temple of the Order of the Golden Dawn, where Aleister Crowley, in a black mask and disporting himself in kilt and cloak, engaged in magical battle with WB Yeats over control of the workplace. Police were called to disperse the combatants.

I’d arranged a rendezvous for 11 one weekday morning on the corner of Chancery Lane and High Holborn. I stood there with a writer friend. The late Victorian block was in the process of demolition. Only the distinguished façade would stay standing, everything else ripped and stripped from the rear, as if they were the soft organs of a delinquent pharaoh, the exterior prepared for mummification.

But at that time, though derelict, the inside remained intact, if gouged. Stairs, walls, floors, the last remaining decorative metalwork that hadn’t been hauled away to architectural salvage. Panels had been ripped away, some stairs were without cases, floors gaped open to lower levels. A young site foreman in a yellow jacket and hard hat emerged from his hut at the top of a flight of temporary steps. My friend Tom had made the appointment. Demolition engines were parked around the front and rear of the block.

‘You’re in luck,’ said the foreman, when he hit ground level. We didn’t shake hands. He nodded his head. ‘We begin today.’

‘How long have we got?’ Tom frowned at his new smartphone. It was 11am.

He walked up the steps into what had once been the main entrance and grand hall, a wide, elegantly if pompously proportioned staircase spiralling to higher levels. We knew the room we wanted was on that higher level. We began climbing the stairs.

I stopped on the first landing, looked down. ‘Know about Crowley?’

The foreman was young and looked at us with an untroubled smile. He shook his hand. He had not heard, no. Was he a DJ?

‘Kept a kind of temple there,’ said Tom. ‘A room lined with mirrors.’

We’d climbed to the second storey, pausing for breath and continuing to the third. ‘You know,” I said, looking back, “he was called the wickedest man in the world?’

The foreman came up behind us, glanced queerly and shouldered ahead. We took a corridor along the third floor and stepped into the opening to a large set of rooms. ‘He called himself Little Sunshine.’ I had a flash of Kubrick’s Overlook Hotel, the light hitting all the right angles. ‘Kept a skeleton in the cupboard and fed birds to it.’

Tom was staring around, holding up his phone to take pictures. “Dead birds,” he said loudly, maybe too loudly. We moved in to one of the smaller rooms. Tom’s voice echoing in the chamber: ‘One of his most important magical rituals took place here.’ It was like hearing a voiceover. His face was flush with excitement. ‘We are standing,’ he announced, ‘in the Black Temple.’

We looked at each other, and then at the foreman but something about the foreman had changed. I was surprised at first. The untroubled youthfulness had left him. I mean, absolutely. His face had gone completely white. He looked at us almost in fear. At about the same time, a great sheet of sunlight crashed through the window behind us. And people tell me it’s not a magical universe.

The foreman spoke in a stiff, grating voice. Our visit was clearly coming to an end. ‘We found a human skull in the basement this morning,’ he said. He gave us the hard stare, as if we were quarry. There was more. ‘Seven candles set around it. They were alight when we arrived.’ Did we know anything about this? I saw the Adam’s apple move in his throat. A skull and seven candles, and if it wasn’t us, then who? We were in what we guessed were Crowley’s inner apartments, raising dust into the sunlight. Tom took more phone snaps. ‘Incredible,’ I said. ‘Did you find out who did it?’

We heard a shout from below, the sound of demolition men moving about.

That morning, the foreman said, a nightwatchman had been suspended. The skull and candles had been removed. There was nothing more to see. He gave us a hard look. ‘You’ll have to leave. You’ll have to leave now.’ He turned around, not looking back at us as we followed him down the three flights of stairs to the basement. Birds blood and magic mirrors. Crowley had sailed from here for Cairo, where his young wife would channel the voice of Horus in the Belbaak Museum, and Crowley would write it all down and make a movement of it. Among his later followers was a young Californian named Jack Parsons who devised rocket fuel for the Apollo missions. He blew himself up mucking around with an explosive mix in his back yard and left his widow, Margaret Cameron, to continue the great work in Laurel Canyon, home to seventies soft rock. She became den mother to all those hippies. The woman is the Eagles’ Hotel California, that’s her. ‘You can never leave.’

The basement of Crowley’s Chancery Lane apartments spanned the whole block and was painted in earth colours, the red ochre archaeologists identify as the first human pigment, found in shells in the Bombo caves of South Africa. It felt musty and oppressive. I imagined the procession of mirrors when Crowley left the apartments in 1904. We saw the little blobs of candle wax where they had burnt in a circle on the floor. No, said the foreman, it wasn’t a real skull. But whoever put it there had serious intentions. Then we were back outside, standing on the front steps, the demolition crew stomping around us in hard hats and yellow jackets.

‘Look at this picture,’ said Tom; it was of the third floor room we’d realised were Crowley’s. Great beams of light through the sash forged a weird figure from the world of otherness. An event in aethyr. The foreman left without a word. At the top of the steps, opening the door to his cabin, I saw him look back and down at us, his face twisted with hate.

Tom placed a story and the photo of the strange shape of light in Time Out. The foreman, he learnt through some channel or other, soon lost his job. Following the affair of the skull and the candles, security was tightened. Certainly no access for pedestrians, civilian writers with strange stories to tell.

We hit the Underground, where some kind of emergency was going on. People were coming out of the gates, but not going in. ‘Will Inspector Sands report to the operations room immediately.’ I thought of the skeleton, dripping with the blood of songbirds. And then the demolition began.