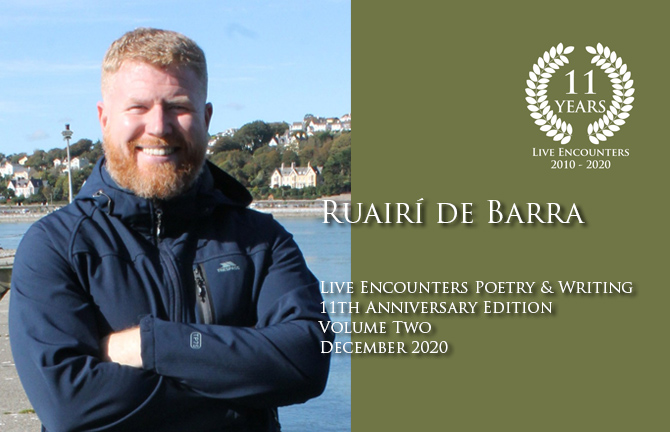 Ruairí de Barra is from Co. Mayo and now resides in Co. Cork. He is a sailor, an award-winning military journalist, and a poet. His creative work has featured with Tinteán, A New Ulster, Live Encounters, Bangor Literary Journal, The Ranthology Anthology, Black Bough Poetry, The Boston Globe, Boston Accent, Poetry Jukebox, The Silence Anthology  and all his work can be read on https://paperneverrefusedink.com/

In the Low Valley

In the dampness of the low valley,
all rows are remarkably dry and kept,
a handsome sty from rushy field,
brings the wandering foot,
to light upon the hard-packed earth.

Fingers intertwined,
hard grip to hold back,
a binding in the throat,
of a half remembered smokey knee,
beside the range,
memories of the exuberant release of the dark bottled gift,
illicit suck of bitter suds,
tasting the warmth of laughter.


Delicate treasures inhabit the front room,
spindled legged glass fawns mid china cups,
rich dark chocolate swirling,
drawn from the recesses of a handbag,
to mark the rare visit,
of a beloved one from across the sea.


All come flooding,
like the stream bursting from the hillside,
where misshapen trunks of ash,
guard the lost homestead,
while the blackbird rests,
black face sheep watch on in silence,
as goodbyes are said to grey headstones,
and we walk home alone.

In that empty lifejacket,
adrift upon the sea,
was lost child or brother,
borne away so far,
to die alone,
reduced to a statistic,


Driven by the eternal motion,
as the grains all settle back,
washing final footprints from the sand,
no mother’s tears will wet the shroud,
no mark left upon the earth,

Chasing midnight visions,
shining skyline of promises,
on white knuckled final journeys,
to impossible destinations,
separated in the darkness,
from ten dollars’ worth of cheap foam.

Make a few bad jokes to cover up your shame,
of stomach broiling from a scabies riddled teenager,
to mask your revulsion,
sunglasses will hide your guilty eyes.

Overcompensate later by giving an extra ration,
to a brown eyed child,
draped from shoulder to knee,
in a ragged adults jumper.

More than palms get calloused,
hardening hearts lead sharpening tones,
sharper still the baton strike bites,
plasticuffs for the shamed along the guardrail.

The smell lingers beneath the canopy,
seeps through the filter paper,
stains the rolls of cardboard,
brine, petrol, piss and fear.