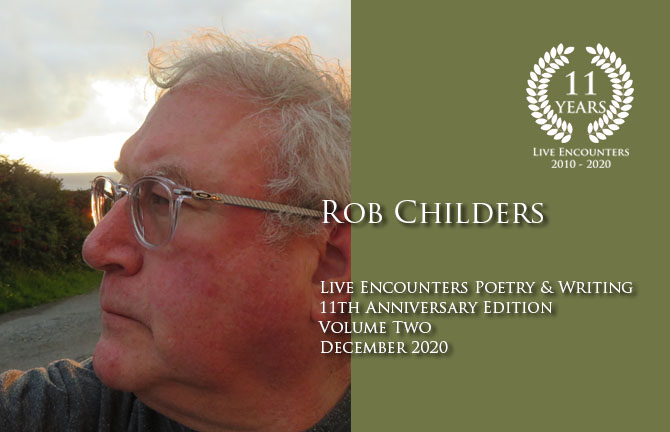 Rob Childers is a retired elementary school teacher who divides his year between his cabin in Alaska and Connemara, Ireland.  His poetry has been published in Ropes, Tule Review, Poet’s Republic, Galway Advertiser, and multiple issues of Skylight 47. In 2014 he was a featured reader for Galway’s Over the Edge library series and reads regularly on Connemara Community Radio. Rob placed first in the Alaska State Council for the Arts Annual Poetry Competition and has been short-listed and Highly Commended for many other competitions both in Ireland and abroad. He is an active member of the Clifden Writer’s Group, Galway’s Over the Edge writer’s group and the Ox Mountain Poets in Co. Mayo.

It is a gull day,
wind whipping out blindly
white welts on the bay
sky’s cloud-crew
dragging off tattered blown puffery
while Sun, no ray of concern,
shines brilliantly wherever He damn pleases.

And as song birds hunker
deep in the hedgerows,
quick flits and rustled hops
their nervous giveaway,
gulls, the blue-collar birds of the sea
raucously punch in.


They lift and turn working the swirl
competent in every wind-carving skill
until Sun, half an eye kept
and points awarded for style
reaches down to ignite them

turning their grey churn, now silver careen
into an un-choreographed spectacle,
drawing then capturing
even the coolest of gazes
assessing that wind blistered bay.