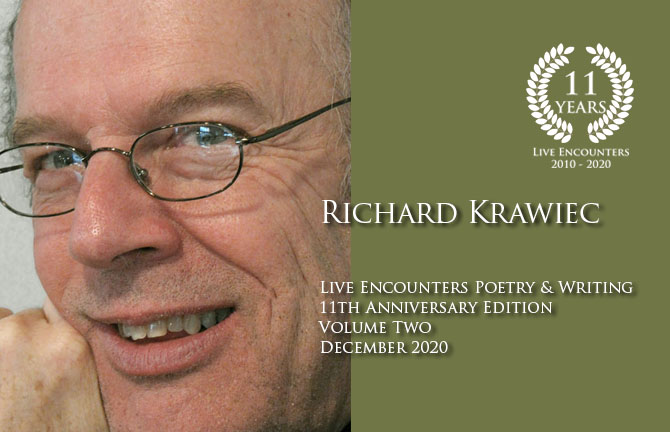 Richard Krawiec’s fourth novel, Paria, was published in France (Tusitala Editions) to widespread acclaim. He has published three books of poetry, most recently Women Who Loved me Despite (Second Edition). His work appears in Drunken Boat, Shenandoah, sou’wester, Levure Litteraire, Dublin Review, Chautauqua Literary Journal, etc. He has been awarded fellowships from the National Endowment for the Arts, the NC Arts Council (twice), and the Pennsylvania Council on the Arts. He is founder of Jacar Press, a Community Active publishing company. www.jacarpress.com

I have travelled from spy,
visitor, outsider squinting
past the chain links
I curled fingers around,
to a country road
of consistent noise –
mechanized hums, bass
drone of commuter tires,
the permanent, repetitive
barking of penned dogs.


I grew up watching men
pound each other into the street;
now in the hurdy gurdy
of heaters and woodpeckers
I have arrived
at where I die.

I can fill the bird feeder with cayenne
to keep the squirrels away but I can’t stop
the thrasher from flashing it’s long, sharp beak.

Once a man on death row
told me that writing was the first time
he believed his life had value.

I horded those words like seeds
fooling myself into thinking
that every soil is fertile, that images,
and descriptions, careful sequencing
could sprout a sheltering tree
in anyone’s life.


Wtf were you doing with a gun?

The cardinals and tanagers flutter close
then veer off. Finches and sparrows huddle
in bushes without singing. The thrasher
perches, releases a warning squawk
then stabs its beak down.

On screen a breathless announcer
dressed in a sleeveless party dress
huffs the facts – a customer bulleted,
a cook dead. Your priors. Your release.

The cell phone video shows you face down
as if sleeping on the asphalt while two cops
probe you with their booted toes.

WTF was I doing with a pen?

I convinced myself you were trying hard,
helped you meticulously map your movements,
revise to make the sequence work. The story
based on that first murder
which sent you to prison.

Watching the funeral I wonder
did I help you analyze or plan?
Did you use the grade as evidence
for parole? Did you plot your actions?
What part of your village am I?