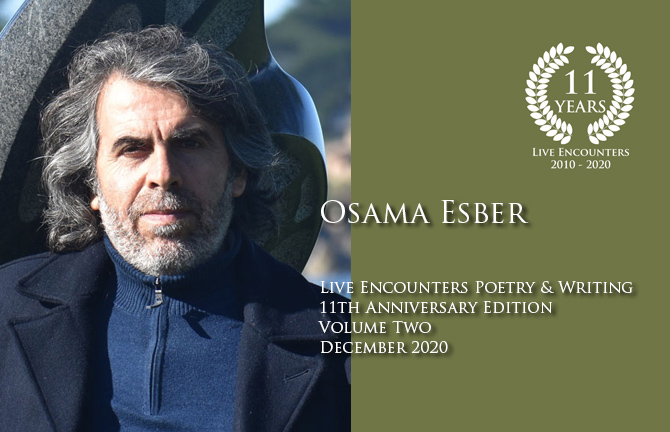 These poems are translated from Arabic by the author and edited by the American writer Don Reneau.

River,
Where will we find candles for all the graves,
Angels to spend the night over wounds,
Heavenly ears to listen to the moaning,
To the last gasps of the dead in our breath?

In the smoke camouflaging dawn,
Casting it over faces like a sheet of flame,
In the splinters of a child dreaming on the threshold
And in dreams buried in ashes,
Strewn on burning banks,
Where graves are dug
Your water celebrates in our veins
We keep hearing a sound repeating:
Euphrates
A freshness
Writing its poem
On the leaves of light.


It is the calamity, river,
In our pores,
In the air we breathe,
That seeps to us forged messages of joy.

Your territories,
Mirrors in shreds.
The light that used to wave at us with sunny handkerchiefs,
Extinguished in hearts and faces.
The groaning
Like volcanoes erupting.
And the lava flies
Like incensed eyes over your bleeding cities.


Your territories
Are a rain of bullets,
Under a sky that delivers what it is commanded of it,
On a land
Whose graves are dug with the hands of words.

It is your water, Euphrates.
The sadness of your water roars in our ears.

In your water, river,
Is another water that falls from the eyes.

Hands tied behind the back,
They cling to a passing light
And travel with it into dreams.

Muddy you flow, river,
On the two shoulders of a city,
Whose dreams precipitate to your bottom,
Another greenness for death.

With the nets of our hopes, we hunted corpses,
dragged them to the banks,
and bore them over shoulders to their graves
under an indifferent heaven that rained only shells
on a land that grew only fear
cut by roads that were not for the living.


Quwaiq,
River of corpses
And foregone possibilities
Wasted in black waters.
Of old there was purity in your water.
There was freshness
That we no longer see through our tears.

I was a but a mirage in the city,
In a khaki suit
Jumping over fences in search of Aleppo nights.
The bursting at all horizons still silent at that time.
In words there were holes.
Needles in the face sewing masks.
And among the pistachio trees,
Downcast under a shaded sun,
The heavens were a rock on my shoulders
And the land an abyss under my feet.


They called it marching.
It was entering the body tamed into a cage.
They called it a narrow city,
Its dreams never escaping the castle.
Its features mired in the mud of its past.

And your water, river, a question that mingled worlds.

On your banks my footsteps mumble,
And my head, victim of the old language,
Dreams of your water, flowing new, everyday.

Do you hear the bullets that penetrate now?
Do you see the smoke that writes the city’s autobiography?
Where was this hidden?
As your water, which we do not see
Except when winter is angry?

Where is your water, river?
Should I hang an image for you on the wall to
glorify your old purity?

Oh river of the depths
What distances you cross there inside to extinguish an old thirst?

I bow in front of your roar
And pray, asking waters for forgiveness.

River,
I hear your purity whispering in the ears of thirsty villages,
Whose sons are thrown to the flames,
And their ashes scattered in the winds of death.

River
How can we restore the dead from death?
How can we let your waters flow in their cheeks again?
How can we regain their pure hearts,
Pure love,
So they stay alive in an embrace that crosses borders?


River,
Al-Sinn River,
You know deep inside your waters
That life is more precious to be spilled
In a black drop of blood.

I see you
Weeping,
Spilling your waters
In the Mediterranean sea
Where the light is dimming
Expressing sadness over our death.

I like the resonance of your letters,
The word that they form,
Your generosity, while amassing your waters,
And distributing them on the fields.

I did not hear you, river,
You were dry in my features,
Exiled from my veins.
I did not know that you have throats
From which waters rise
And angrily flow
Over the plains.

It is dryness, river
Hits you in the core,
While the hands
That deviated you from your track
Remain, in front of your eyes,
A symbol of dryness
That ties the noose
Around the necks of the cities.

1- Together with the Tigris, it is one of the two defining rivers of Mesopotamia. Originating in eastern Turkey, the Euphrates flows through Syria and Iraq to join the Tigris in the Shatt al-Arab, which empties into the Persian Gulf.

2- Is a river and valley of the Aleppo city, Syria and Turkey. It is a 129 kilometers (80 mi)-long river that flows through the northern Syrian city of Aleppo.

3- Barada is the main river of Damascus, the capital city of Syria.

4- The main river in the Syrian coastal region.

5- The Orontes or Asi is a river of Lebanon and Turkey and with a long course in Syria. The word Al-Asi in Arabic means the disobedient river.