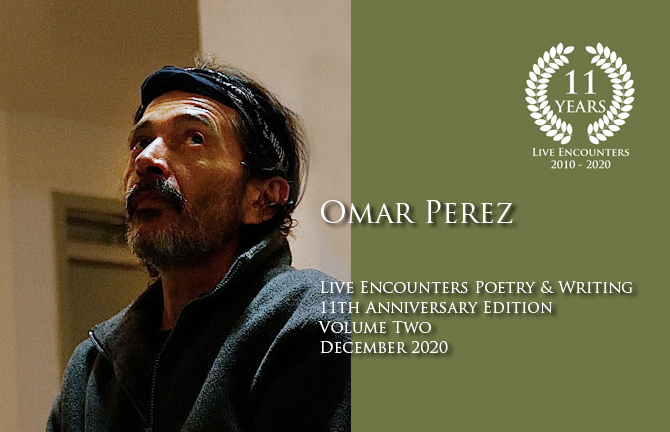 Born in Havana, February 19th, 1964. Poet and translator. Omar Pérez has published six books of poetry in his own country: Algo de lo sagrado. Unión, 1996. (Also published in the U.S in 2007, by Factory School, N.Y.; with translations by Kristin Dykstra and Roberto Tejada. www.factoryschool.org/pubs/perez); ¿Oíste hablar del gato de pelea? Letras Cubanas, 1998; (Translated by Kristin Dykstra and published by Shearsman, London, in 2010: Did you hear about the fighting cat?); Canciones y Letanías. Extramuros, 2002; Lingua Franca. Unión, 2009; He has also published a collection of essays on poetry and translation, La perseverancia de un hombre oscuro. Letras Cubanas, 1999; Crítica de la Razón Puta, obtained the 2010 Nicolás Guillén National Poetry Award, and was published also by Letras Cubanas. In the same year and with the same publisher, Omar Pérez offered a second collection of essays, El corazón mediterráneo. In 2016, he published Filantropical, with Letras Cubanas, and Sobras Escogidas, with Silueta, Miami, Florida. In 2018, Station Hill (N. Y.) published Cubanology, a book of days, while the Alabama University Press printed The race, a poem collection; both translated by Kristin Dykstra. Omar Pérez has consistently translated from the English, Italian, French and Dutch languages. He has published, among others, a (Cuban) Spanish version of Shakespeare´s As You Like It: Como les Guste; a translation of Dylan Thomas´s Collected Poems; an anthology of XX Century Italian poetry (L´Antimelancólico), a collection of Anglophone African poetry (Mágicos Intervalos) as well as (Lo que es)  an anthology of Dutch verse. Numerous translations of poems, short stories and novels from the above mentioned languages, have been published in Cuba and abroad. He is a graduate from Havana University´s Faculty of Languages in English and North American Language and Literature, 1987. In Italian Language and Culture, from the Scuola per Stranieri di Siena, Italy, 1991. In Nederlands Taal en Sociaal Orientatie from Amsterdam´s ROC, 2005. Accompanied by his cajòn, he has performed his poems and songs in Havana, New York, Chicago, Taipei, Sao Paulo, New Orleans, Dublin, Cali, Medellìn, Buenos Aires and Woodstock, among other cities. He lives in Havana.

I am not a Buddha

I am not a Buddha
I have two hands, two feet like paws
five finger each and with their claws
I can break and tear but nonetheless
I can also stop.
I am not a Christ, i have a big mouth, not a Christ
I have a reckless tongue, i am not a Christ
I can lick and chew but nonetheless
I can also shut up and offer you
this silence as blue as death
I am no meek sheep practicing Zen
to avoid missing the train
of Awakening
I am a vandal trying to revert the scandal
flowing from the Superego to regal legal
supposing that, beyond or before the beatings
life will give you unconditionally
there’s a void
a subtle point of emanations, inverse or reverse
never perverse, the brunt perhaps of crude existence
I am not a Buddha, i just resist altough resistence
Is not a good instance
I’m no Spiderman, Batman, jazzman, barman
no Superman, Rastaman, bang bang gangman
nevertheless i exist.

camino junto a los grillos
not much of an identitarian
write or wrong?
At dusk the river is clean
the owl sings
I walk aimlessly and diagonally
nowhere to go nothing to come back to
though I know that I look pensive
I also know that i´m not thinking
Proliferation
a yellow atmosphere
proliferation
a virgin with a chain
proliferation
Saint Lazarus
with two dogs in a fridge
proliferation
a convict raising a flag
proliferation
to love and to forget
a virtual masturbation
a background bolero
a cataclysmic version
the holidays belief: circumvention
two lies a dollar
one truth by two by three
proliferation
a gospel, a debate, an information
a bible and a conflagration
as if you didn´t know
Cuba get along your highway
Cuba country lane
proliferation
a statue in the open sea
the best angels of nature
dancing by the microwave
buy and buy and by your way
a land kaleidoscope
to meet over the rainbow
in a microscope
proliferation
may the wind knock
the monument down
for this occasion

How remote! how remote?
did you mention the literary creeps
are they smiling? Yes
they are. I feel again like
a European, your rope hanging
around in this translation workshop.
THE OLDEST MISTAKE, she writes, IS
TAKING THAT FOR GRUNTED,
honest mistake to let things happen the way
they should or shouldn´t
she smiles still beyond and below the horizon
of her own nose.
Her nose is our horizon, surely
the Germanic madness, the curly demure, the bricks
of language taking THAT FOR GRUNTED?
continue:
the porpoise of description
(now they laughter with participatory indifference) some
almonds, some eyes, some pumpkins; grapes of graph
continue:
generally spitting, as a matter of fat, everyone
remembers each word that has been said: let´s go back in thyme!”
would you consider a dash after better than a dish
before
the way you pronounce “sentence” reminds me
of a car trunk closing on a butterfly. Now, we all,
in one way or the other, go over “butterfly”
in a September School of Manners manner
I wish but I don´t
at a more pedestrian level, says the word doctoress
THE DASH IS NOT LONG ENOUGH TO BECOME
AN OVERACHIEVER, then I think:
There´s only one thing more real than you
and is the river.
The 3rd person always wants to fuck the first person
he (or she) meets in the sentence whereas you
are still absent
love poems are a sort of reaction, yes, the incubatory, the
circulatory and the ejaculatory, side by side, ah!
translate this:
del árbol d la duda nacen los frutos d la perseverancia.

A soldier is a serial killer

one wants to change the world instead of abandoning it
to wage revolution even if
it turns into involution eventually
a tourist in perpetual convolution
an ameba of change
a quantity how many revolutions
per minute
a soldier is a serial killer
a serial killer is a soldier of anomaly
incorporated (anomalink)
a priest, a certified persuader
a television of purpose & will:
divine or not divine, that is the purpose
of anomaly, the price of malice
the molasses of good: a player
is a serial hero
but is Venus really a porno star
as it aligns with the crescent moon
who’s the serial rejoicer
who’s the animal player of the star
singing is a better exercise than swimming
which is the best exercise ever applied to the hydraulic condition of the human
it’s actually hard to sing underwater, so, who’s the amphibian
who’s the soldier in the constellation of rhythmos
in the session of Pathmos…whatever so as not to get formal
in an anomalink of language and its music.
As much as soldier, killer, pro hero porno star,
an anomalink is an intersection of human and debris
human debris, what a beautiful name! for any cosmic animal
except the unicorn.