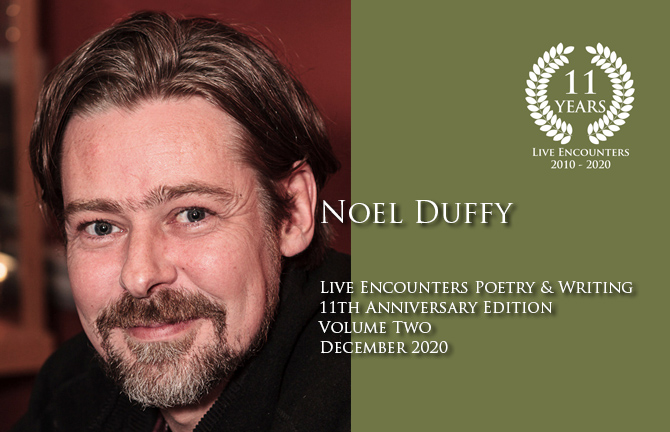 Noel Duffy’s debut collection In the Library of Lost Objects was published by Ward Wood Publishing, London, in 2011 and was shortlisted for the Shine/Strong Award for best first collection by an Irish poet. His poetry has appeared widely, including in The Irish Times, The Financial Times and Poetry Ireland Review, and has been broadcast on RTE Radio 1 and BBC Radio 4 and more recently he was the recipient of the Patrick & Katherine Kavanagh Fellowship in Poetry. A new collection, Street Light Amber, was published in summer 2020.

The earthquake is not satisfied at once
And in this way I wrought upon myself,
Until I seemed to hear a voice that cried,
“Sleep no more.”
William Wordsworth, Prelude, Book X

He arrives by carriage to the port of Calais, dismounts
and gets ready to depart with a ruptured longing.
What was it he was escaping from? – the cost of love
or the cost of terror, Annette somewhere else without him,
their daughter barely supping at her breast, oblivious
to the horror unfolding around her.


He had come with such great hope, yet found instead
a great despair, the cobbled street he so recently walked
now blood-stained and foul; Robespierre and the myriad
dead, their guilt consigning them to the will of the guillotine…

Such terrible things he has seen as the tricolours flutter
in the bright morning air above the hotel, patisserie and bar:
liberté, egalité, fraternité… but what of love?
Was he, William, fool to imagine it differently, that such
beauty and nobility of spirit might so swiftly turn to peril,
the things he has witnessed here too much to carry?


Instead he holds two small cases and a ticket to England,
takes a step forward onto the gangway of the ship,
its sails readied and set to deliver him home
to all he has known, awaiting his servile return.
One day, he understands that he must write of this –
to try, at least, explain to Annette and their daughter
and how it was he came to fail them.