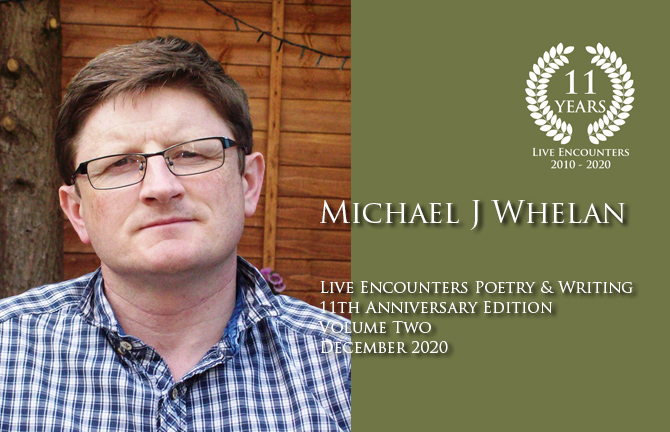 Michael J. Whelan is a historian and soldier-poet living in South Dublin, Ireland. He deployed as a United Nations Peacekeeper with the Irish Defence Forces to the conflicts in Lebanon and Kosovo in the 1990s. He holds a Masters Degree in Modern History from NUI Maynooth and is keeper of the Air Corps Military Museum and collector of oral history for the Military Archives of Ireland Oral History Programme. His poems are published in Australia, Paris, Mexico, USA, UK, South Africa and Ireland and included in ‘And Agamemnon Dead: An Anthology of Early Twenty First Century Irish Poetry, (Paris 2015) & ‘The Hundred Years War: Modern War Poems’ (Bloodaxe UK) 2014. He was selected for the Poetry Ireland Introductions series and was 2nd Place Winner of the Patrick Kavanagh & 3rd in the Jonathan Swift Awards. He has featured on T.V. and radio and at literary festivals and his debut collection ‘Peacekeeper’ was published in 2016 by Doire Press. His second collection ‘Rules of Engagement’ was published in 2019.

The Long Hours Await the Sentry

‘But a whisper is clearer to us than a shout to anyone else’
ConchobarMac Nessa, King of the Ulaid.

All the lesser caste shadows stretch longer,
darker, reach out, creep into each other
with a coldness pulling the night into the world.
And so the long hours await the sentry.

Guilt descends in a cloud of incense,
as if a whisper of bells tolling
between darkened shapes of winter city nights,
the skyline blacker than all of space
reserved for tainted priests.

He sees all the people then
are but Jerusalem trapped by walls
that rise and fall to times moral breaches
slung by catapults and crucifixions
and the market coins that rolled into crevasses
beneath its foundations.


Staring Down the Years

Red tears pooled in the street
like petals fallen from a fuchsia.

A bright flower and grass
spring from a sea of cobbles.

He realises he’s staring down the years,
the wind complains and rifles his ribcage.

He crosses far from the pedestrian black and white,
the corners howl at his hesitations.

And the Gods Look Down on the 21st Century

In the wound’s red lips
rimmed in black,
all of humanity piles,
jostling for a space, filthy and festering.

They are alone there, alone,
no gods, no power, no righteousness,
no saint protects them.
They must learn to teach their own hearts,
that all they have on that rock – that Jerusalem
is themselves, and they must realise soon
what the sun shares with them,
they must learn peace in their universe
before their moment ends
and dashes them into a comet’s tail,
this arc of sky and all.

They are the migrating bird
that drowns in the ocean
without reaching its destinations.

O darkness
my corrupted other,
in the night’s un-curtained window
your argument sees through me,
I have no answer,
our reflections are mute.
Which is heaven, and which is truth?

Since time immemorial,
in the night’s dead haunts,
blackness still waves,
rolls and troughs
across vast oily oceans of this Earth,
slick and unwitnessed,

Can you see them?

The stars are many,
like pebbles on a long shingled beach
rippling under glassy water, moving
when the night’s umbrella slowly arcs.
Only a halo of moon on the horizon
might separate them – their aeons,
and I would grieve then for my Age,
for my years and the wonders
I have not and will never see.