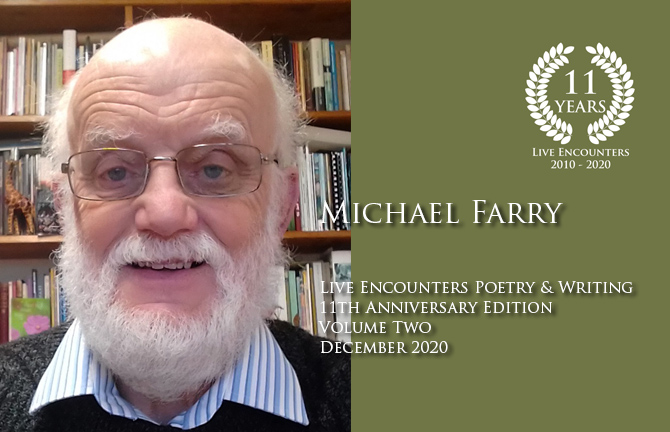 Michael Farry’s third poetry collection, Troubles (2020) has just been published by Revival Press, Limerick. It deals with memories and commemoration of the 1912-1923 period in Irish history. He has also published widely on the history of that era. Previous collections were Asking for Directions, (Doghouse, 2012) and The Age of Glass, (Revival, 2017).  He is a founder member of Boyne Writers Group, Trim, and edited the group’s magazine, Boyne Berries, from 2007 to 2014.

I am no better than my ancestors
sitting under a whin bush
watching clouds race over the opposite slopes
cursing the Atlantic and prevailing winds
hoping for a dry spell to save turf
or hunt rocks for souvenirs.

That must have been the mushroom summer
when the sides of the potato drills
bloomed with white cups for ten days
Or that fertile summer father
brought in shallots and lettuce every evening
dropping clay on the kitchen floor
and we gave quick thanks for the bounty
and the freshness, enjoyed the fast food.

Every time I cross the furze-whin line
in the dull midlands, I give thanks for wild things,
unnecessary brightness, careless yellow gaiety
colonising our wasted edges
patient, watching us career into chaos
providing shelter for us useless beings.

Today in Haggard Street they laminate a cottage
In stone slices, mimic some imagined past
Where taste was humble, superior.
Tom-foolery.

On the failings of mortals, minders of mortality,
The thin hope beyond the surety of our lonely
Deaths, the fellowship of fragile
Faith.

I have a white scrap of Creevan cottage plaster
From a wall I remember studded with images,
Smoke-stained ancient
Icons,

Sacred Heart, the TB-taken mother, Robert Emmet
Recovered from the dunghill where Crown Forces
Threw it in nineteen twenty
Subversive.

If we survive
I’ll take you by the hand
down our small garden
show you the sweet pea we sowed
at the height of the pandemic
the new shed we had installed
just before the lockdown
the dahlias which survived the winter
and I planted out that lonely Easter
tell you how I stared
at every photograph
watched you grow so quickly
from snap to snap
from video to video
noticed each new expression
movement, ability
in tears, unable to hold you
and terrified I never would again.
You will not remember this
how your first happy, secure months
were spent in such a desperate time
how your smile and gurgles helped.

Things I Learned from Uncle Quentin

The secret formula you work on all summer
has no solution, is futile, a mere plot device.

Friend and enemy are difficult to distinguish
by looks, only an author can discriminate.

The tall dark man with a rather fierce frown
on his wide forehead may be on your side.

Don’t ignore the rustling in the shrubbery
the shadow on the blind, spies everywhere.

The person wandering the hills with a net
after midnight is not chasing butterflies.

Even your writing den is not secure
especially during your afternoon nap.

But the gold ingots in the island dungeon
will be recovered, thanks to the children

so have patience, don’t exclaim, the mystery
will be clarified in chapter twenty-one.

i
When the kitchen mantelpiece clock was stopped
for my great grandmother’s wake
I considered time, hands frozen on Roman numerals
allowing me home from boarding school’s
Latin and Greek, dead languages,
animate only in my text books.

When my clock restarted I continued
into the big round calibrated world
beyond the schools, my fuller foolish days
to Dante, Swift, Jones, and all the other so-called dead
through an array of timepieces and bells
ordering hours, years into manageable chunks,
slices of this and that.

She lives.
I see her dark skirts brush the bare floor,
hiding her secret tobacco. I repeat her Irish curses,
share her fear of a pauper’s funeral,
show her elegant carved name
to great great grandchildren.

ii
Half an education later
I was shocked when the father
I had helped foot turf three weeks before
was given twenty four hours on a Saturday morning
by the fresh-faced physician who had tea and toast
while we fussed about the absent,
called Dublin, Sydney, New Jersey.
He took thirty eight, left at mid-night
no-one sure which day to record
officially a Monday death,
Saint Bonaventure rather than Saint Camillus.
Does it matter?

As old now as he was then
I am congratulated on my good health,
vigour, positivity, and I smile the same smile
potter on through chores and duties, distractions
with just an odd sideways glance at the clock.

iii
Yes, I have had an array of clocks and watches,
analogue and digital timepieces
checking progress, estimating improvement,
tallying achievements. All now seem time-wasters,
scrap metal fit only for landfill
insistently ticking towards the future,
while I try to find a gentle tock, an innocent countdown
a rest from hours and minutes, deadlines, appointments
half past eight, five minutes to six.

But there’s duties to be done.
A grandchild to collect.
A meeting to attend.
A poem to finish.
A last collection to edit.
Is that the time?
Set the midnight alarm.