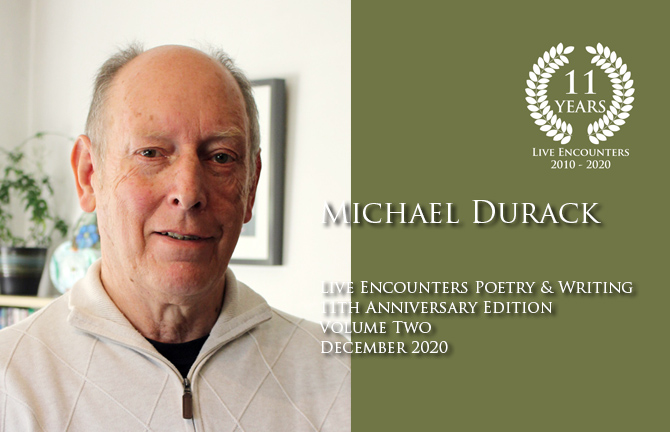 Michael Durack lives in Co. Tipperary, Ireland. His poems have appeared in publications such as The Blue Nib, Skylight 47, The Cafe Review, Live Encounters, The Honest Ulsterman and Poetry Ireland Review as well as airing on local and national radio. He is the author of a memoir in prose and poems, Saved to Memory: Lost to View (Limerick Writers Centre 2016) and with his brother Austin he has recorded  two albums of poetry and guitar music, The Secret Chord (2013) and Going Gone (2015). His first poetry collection, Where It Began, was published by Revival Press in 2017 and a second collection, Flip Sides, has just been launched by Revival.

Our old gods did not do reticence.
Their every utterance came with fireworks –
lightning bolt, comet, burning bush.
Or else they put the frighteners on us
in the eerie darkness of eclipse.
Our magi looked toward the sky for signs –
smoke rings, dove with olive leaf,
a bright star in the east.


But our new testament selves have eyes only
for the smart phones in our pockets
whose bleeps and tinkles alert us
to all that we will ever need to know.
God is in the digits of a wifi code
and where we roam our data roams.
The ones we love we turn away from,
trusting to our numerous facebook friends,
their likes, their comments and cheerful emojis.
And when we’ve done our time
and want to signal that we’re coming home
an exchange of short-hand texts will do the trick,
no need for yellow ribbons round a tree.

The world has closed in upon us;
the hills, like shops, are shuttered up,
our new horizons walls and privet hedges
that gainsay excursion.

But there is vibrancy in this garden;
the birds of Spring are about their business,
and the stream by the edge of the lawn
ripples with sustained applause

Although we crave the warmth of human touch
smiling faces and cheerful voices greet us
from our phones and tablets.

We are at war, our leaders say, with an invisible enemy,
a phony war liable to turn real at any moment;
but we are resolved to dig in, to pull together,
ration our needs, not asking for so much.

Like the horizon, our egos condense.
And yet the sky at night fills up with stars;
let’s call them lucky, shower them with thanks.

A Blooming
for Declan Masterson

Blessed with the talent to do anything,
to bask in limelight, be considered great,
or serve in an unpretentious  way
like Milton’s they who only stand and waite,

You might have flamed like some flamboyant sun,
shimmered, dazzled, made a show;
noondanced in an azure sky;
daubed horizons with your afterglow.

Instead, you trained an unassuming light
on chill corners of obscure plots,
tickling the leaves of shy violets,
buttressing stems of frail forget-me-nots.

So, even when clouds enclose like wrapping paper,
in Joseph’s coats the flowers will proudly caper.

after “Witness” directed by Peter Weir

In the early weeks of lockdown it was all shining,
as the Welsh poet put it, it was Adam and maiden,
green leaves and bird song and unity of purpose,
the wheels of the twenty-first century ground to a halt.

Save for the social distancing it was Building  the Barn,
Weir’s Lancaster County Amish all in it together,
giant frameworks raised as if by one hand,
love rivals sipping from the same lemonade glass.

Our hero no longer the alien Philadelphia cop
but a carpenter adept with hammer and auger,
at one with his quaint-bearded, straw-hatted neighbours,
their smiling bonneted women and animated children.

Discord on hold, the barn, unlike Rome, built in a day.
For the five short minutes of Maurice Jarre’s swelling score
we witnessed no dogma, no guns, no graft, no hate,
the serpent made to wait outside the garden.

In our time of need
we turned to our leader,
appealing to his better nature,
only to find that his wisdom
was as unavailing as
the snake’s bootlaces,
the salmon’s step ladder,
the desert’s undergrowth,
the mountain’s depth;
his dignity as immaterial as
Thor’s microphone,
Gandhi’s machine gun,
the Slovakian navy,
Aphrodite’s bra;
his courage as worthless as
the iceberg’s topsoil,
the hermit’s bus pass,
the volcano’s cigarette lighter,
the gargoyle’s beauty;
his humanity as redundant as
Midas’s gold watch,
as God’s supervisor taking Him to task.