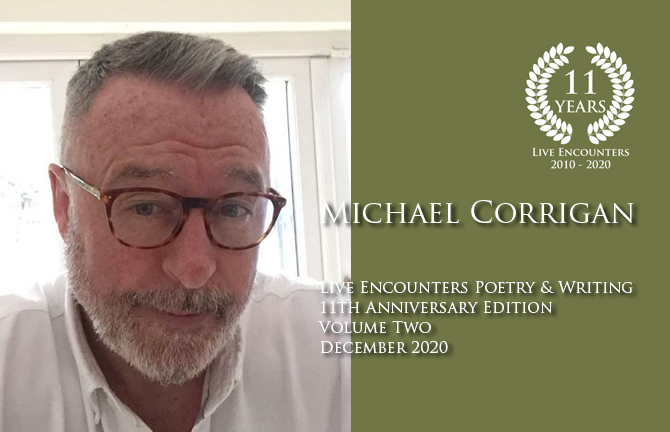 Mick Corrigans’ poems have been rejected by some of the finest magazines around, some of his poems have also been nominated for The Pushcart Prize (USA) and The Forward Poetry Prize (UK). His debut collection, “Deep Fried Unicorn”, was released in to the wild in 2015. His second collection when completed, will be launched on an unsuspecting public like a clown fired from a cannon. His poems have been published by The San Pedro River Review, Poetry Bus Magazine, Rebel Poetry Ireland, The Rye Whiskey Review, Bangor Lit. Review, The Lakeview Journal, MadSwirl.Com, Ink, Sweat and Tears, Angle Poetry, The Mojave River Review, Ofi Press, Live Encounters Poetry &Writing (Reference Points) and many more. He has spent his pandemic time doing wild and reckless things with his hair.

She sang sea music, fluent in its rise and fall,
knew deep, dark places that calved the biggest waves.
From the flat roof of a prosperous house in Magdala, Galilee,
watched the purple gather of every winter storm
chase small boats to harbour before an angry swell.

Tired of watching her silenced sisters drown,
on a morning dreamy with cinnamon and baking bread,
she left to join the circus, to the fishermen without fish
become shepherds without sheep,
hippies without the hippy van.

She sought no approval, required no permission,
fierce intellect piercing the fluffy cloud of faith,
questioned, probed, incised, swift and sure
in the back and forth, message, not magic her inquiry.

In Ephesus her end of days,
nights shallow with shortening breath,
a mill beneath the small bare room,
millstones rumble-grinding, dark sea lapping at her door.

Whatever it is, it is never your fault,
so build on a flood-plain, what could possibly go wrong.
When crossing a bridge bring petrol and matches,
the resultant blaze will be seen for miles.

Your memory closet is full of bleak suits,
wear the darkest one each night in bed.

Pick drunken fights with your late-night self,
you might even win once in a while,
your body is a beautiful thing, so abuse it early
and as often as possible.

Always have access to buckets of sand,
enough to comfortably bury your head,
participative democracy is deader than Dodos,
just follow the leader, loudest is best.

The face of God can be found in the stars
or a slice of bread dropped jam-side down.
Love is transformative, so is tequila,
both will lead to handcuffs and tears.

Knowing good stuff is bad so don’t,
but revel in ignorance, roll in its bliss,
you’ll always look better when covered in crap.

Like a whale breaching, bursting from the earth,
feral creature wearing camel pelt and mud,
a psychological vindaloo of recklessness and virtue
kite-high on desert honey, up to his belly in a river of souls,
his cousin Yeshua, a CEO in the social justice game
though the money changers planned to put a stop to that.
Speaking truth to a power hornier than The President
scripture like lava pouring from his mouth,
air flaying molten eyes impaling all he saw
past soft cloth and perfumed skin down to the hardest bones of truth,
but lost in the halls of the well-fed and finely shod,
with a rolling red ball of endless breaking news,
death on-demand a subscription service
for the dancing girl with her randy king
about to have him cancelled.

Time to abandon the burden of their crap,
Time to drop the winner-loser games,
Time to stop the addiction of regret
(it’s chewy and will ruin your teeth),
Time to love the anxious child inside the angry man,
Time to repurpose each night to sleep,
Time to gain from all the loss, Time for music, Time to dance,
Time to watch a shooting star across a winter sky,
(flying like that final fuck you gave with all your glee),
Time to suck the marrow from the bone,
Time to lick the pattern from the plate,

Of all that’s left of what’s to come,
Of all that shines despite the dark.

Thrown out of home for tormenting the pets
you blamed it on the boogie and went traveling.
Always a charmer though never the sharpest,
the quickest, the brightest, the kindest, the best,
a winged compendium of adult parlour games
you didn’t bring the horror it was already here.
Deeply, profoundly, enduringly attractive
personification of The Pleasure Principle,
not for you those calloused hands of work
rather the priapic curves of hot, fleshy, horniness,
that tingling feel of skin to skin
licentiousness as proof of life,
laughter at the very thought
of “The Devil made me do it.”


The Commander-In-Chief reviews progress to date

No Rubicon’s left to cross,
just scorched earth now
as far as the eye can see.