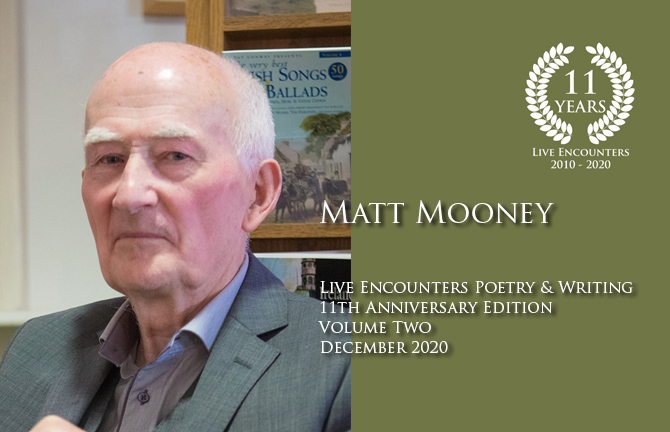 Born, a farmer’s son, in Kilchreest, Co. Galway in 1943. A graduate of UCG and UCC he has worked as a Vocational Teacher in Listowel. His previous collections of poems were: Droving (2003), Falling Apples (2010), Earth to Earth (2015) and The Singing Woods (2017). Winner of The Pádraig Liath Ó Conchubhair Award 2019. (Filíocht/Poetry). He is a reviewer, copy editor and proof reader with the Galway Review Literary Magazine. His poems and writings have been published in: The Blue Nib; The Amaravati International Poetic Prism Anthology; The Galway Review (online), The Galway Review Anthology;  Feasta; West 47; The Applicant; Poetry Breakfast; Poems on the Edge;  The Connaught Tribune,The Kerryman and Kerrys Eye; The Galway Advertiser (Peann agus Pár); Pendemic and Live Encounters. He has been a feature reader in The White House, Ó Bhéal, On the Nail, West Cork Literary Festival, Baffle, Féile Raifteirí, Éigse Dara Beag , The Forge in Gort and has featured online in Cultivating Voices (USA) and Not the time to be Silent. One of his poems appears on the syllabus of a number of UK Primary Schools . His poems have been read on: RTE Radio, Wired FM, Radio Kerry.

I do not like you Winterman,
walking slowly towards me
with your long black coat
brushing against the bushes,
black as well this evening.
It’s your fault you old timer,
you stole the leaves of gold
and sent the sun to bed early,
donning your broad grey hat
for Halloween above us all.
Driving the grey road ribbon,
leaving Abbeyfeale behind,
headlights on at half past five
against your onward march.
Dipping downhill to Duagh
through descending darkness,
ever trying to creep over me;
a rising string of street lights
up the glenside football village,
each orange glow my beacon.

A sleeping bag his home:
thrown around him,
seated on a city bridge;
his only company there
footsteps of indifference
making him invisible,
chilling him as they pass
and the river down below
on its way to Dublin Bay.
Used to staying silent,
catching now and then
snatches of what is said
in the evening rush,
left out of all that is,
despair gone to the bone;
no hope of good times,
his hand holding out
the hard to fill paper cup
and I drop in a coin
to hear the echo of it
sounding a happier note
in the hollow of his heart.

The wild creatures of the bog land
at midnight time of gentle sleep
all curled up in their slumbers
in furze bush and rush and reed
had to flee the frightened flurry
from a sudden racing raging fire.


Each furze in turn first crackled
then it blazed high into the sky,
lifting off the cloak of darkness
where I look down from the hill,
overflowing shining light on me.

Our songbirds sleeping silenced
and the magic of that cuckoo’s call
I heard I’ll hear no more I fear.

Blue lights flash and sirens wail
on winding roads in this inferno.

Tonight our backroom bedroom
is lit by burning bog land light
but tomorrow no furze in bloom
for me; only burnt black I’ll see.

Using pints for punctuation,
farming friends around him
holding earthy conversations
man to man discussions
on someone’s lock of cattle
or a lovely score of lambs.


Turning his back to the bar,
measuring his every move
he employs a walking stick
to aid his disappearance;
exiting black double doors,
writing off another night.


In good humour going home,
unconscious of the loneliness
of the silent sleeping village,
he sits into my waiting car
and we leave the street lamps
to the phantoms of the night.

Note this that if and when ever I die –
(the word ‘ever’ I use reservedly
for we are regularly reminded
by reverend fathers at funerals
that death is one of a few certainties),
think of something funny to slip in
if you are saying farewell to me
in case they’d think I was too serious
or worse still to have been a bore
for you see I’m quite sure
it’s the way to go – from what I know,
is to play the joker
if you have him up your sleeve
for I believe from what I remember
he could play his part and pay his way
better than any king or queen
welted down on a wooden table
with a sudden shout of victory
playing for geese or turkeys
just before the Feast of Christmas
on a winter’s night in a country pub
giving off a sound like ash on ash
in an over heated local hurling match.

In poker jokers can be wild
and under his cloak of mirth and fun
can take the place of anyone
among the elite of playing cards –
though countless games they’ve won.