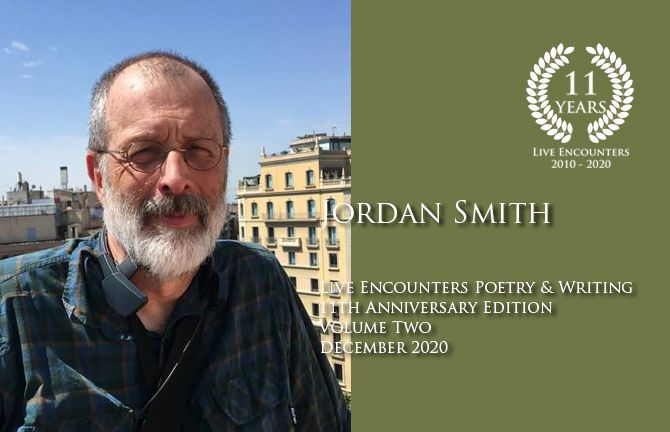 Jordan Smith is the author of eight full-length books of poems, most recently Little Black Train, winner of the Three Mile Harbor Press Prize, Clare’s Empire, a fantasia on the life and work of John Clare from The Hydroelectric Press, and The Light in the Film from the University of Tampa Press. He has also worked on several collaborations with artist, Walter Hatke, including What Came Home and Hat & Key. The recipient of grants from the Guggenheim Foundation and the Ingram Merrill Foundation, he lives with his wife, Malie, in upstate New York, where he plays fiddle and is the Edward Everett Hale Jr., Professor of English at Union College.

An Education in Several Poets, Two Musicians, Four Fur Coats, One Blazer, and One Lunch.

1. Visiting Poet in the Workshop

Trace of single-malt, trace of smoke,
Her voice, whiskey and… a cliché
She’d scotch as quickly as she did my joke
Of a freshman poem in class that day.

Angry, I barely skimmed her books.
Mistaking her strict, assured unease
For condescension, I overlooked
(In lines reworked from the Chinese,

Like silk embroidered, draped across
A polished mirror) the pained, the still
Elusive, allusive trace of loss,
Reflected, barely visible.

I can’t recall that poem I wrote,
Or what she said. But over a plastic chair,
Folded casually, precisely her fur coat…
I still see it there.

Logan and Bly
After the first
Hour and a half
Called a short break,
The lobby full
Of voluble
Poets, with not
Much to say since
The war ended.
From one square bench,
A girl my age
Read her free verse
Confession of
Her parents’ sins,
Of omission,
Mostly. A claque
Of friends nodded,
While behind them
In furs in her
Unplaceable,
Accent, leaning
Toward her escort,
A woman, hair
Streaked like Sontag’s,
Implacable,
Impeccable,
Said, and hardly
Sotto voce,
Oh, she suffers!
Oh, do you hear
How she suffers.

A duo, no drummer.
They entered, trailed
By two women in furs,
Down the aisle

At Goucher College,
Bass and sax
On the bare stage
No mics, no stack

Of speakers, no
Intro, no breaks
Between songs,
No standard licks

Or standards.
Two sets and done,
That other world
Never quite in this one

You go there, my fellow Fellow said,
For mellow baritone voices.
I told her I wouldn’t be caught dead…
Well, so much for choices.

Whole paragraphs of talk. In jeans
And sweater, striped oxford shirt,
And living, well, beyond my means
(Say it, I won’t be hurt)

Among such heady company,
I scanned the poet, his elegance
Unearned (it never had to be),
Unlearned (ditto) who with a glance

Took us in as if a tableau
Of his own making, words
Being the shadow-puppet show
(Recently Pulitzered)

With which he’d raised the dead, the stakes,
And by such sheer, untoward
Imaginative gall (displaced
Souls, Ouija board?).

A full professor (what was her name?)
Asked about Seth Speaks,
Added a dig at William James
And reincarnation freaks.

He raised his hand, equal parts
Blessing, condescension–
What I miss there is the art,
Shrugging, good intentions…