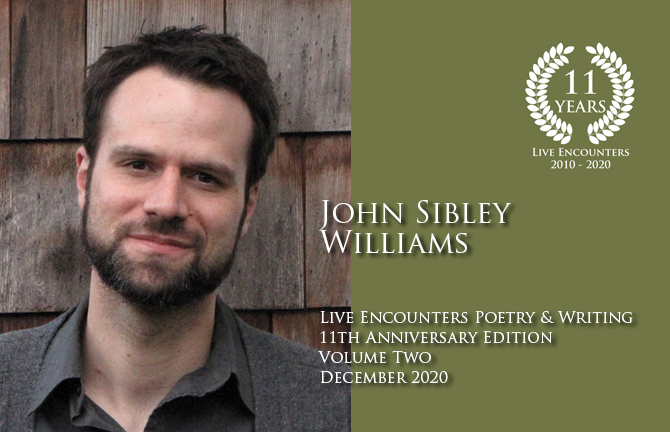 Like when gravity takes over you no longer call it flight
or once you’ve loved someone so long the loving becomes
impossible; unsustainable, though some say in this heaven
draws its contrast; not that the stranger I’m holding to
like a votive candle, trembling like us all, doesn’t fear
the fall. In the absence of faith, two bodies terrorized
together will have to do. & to the faithful, the same.
One of too many oceans roiling, almost calm in its
constant churn, not far enough below. Life going
on down there, despite us. Prayers & toothmarks.
A moment to remember I’ve never been the subject
of this story, that all verbs are transitive, everyone
an object. Like bodies saved from the earth moving
steadily toward that earth.

Barren but for all this bloom. Unconquerable
but that we’ve detoothed every animal save ourselves.

How violence breeding violence retains
in its heart an unshakeable harmony.

A sparrow breaks its neck chasing a reflection.
My son learns to hand-dig a hole in the garden.

When the mountains melt, the rivers overflow;
when the rivers harden enough to feel like

land beneath us, the mountains rebuild, whitely.
Have you ever been so cold a moment of heat hurts?

but that we cannot stop thinking about it. 14 children.
Three teachers. High water mark or is the ocean still rising?

Vacuum. Repository. Not nothing
but close to. Like the occult depths
of that old well out back, the one
children have been drowning in
for a century. Like a backlit sun-
dress when all we really want is
to see our sister’s face again.

Little absent star, am I over-
pronouncing the darkness
that makes us seem so bright?

If it were as heavy as it looks, the sky
would have crumbled & blown
over our awnings as ash by now.

If this distant light that divides us
into hold & held, once & still, is really
where worlds go to die, would we be
hanging so many wishes from it?

If our hearts were as hardened as we want
them to be, we’d never know this home
that thrives in lost things.

Intensities. Anxieties. Swells & strains;
that the heart is running on fumes yet keeps
& cannot stop keeping, releases again & again
to give it something to chase, like a fisherman
with too many lures, too much time, & nothing
at home to return to. Where two forsaken
highways cross, between the overgrown train tracks
& shuttered stands that haven’t seen fruit in decades,
a wilded meadow stalked by ghosts of wolves & rural
industry. Red slivers of a silo, grain still holding
together in its bodilessness. A quieted thunder.
Fathers of grown children pierce morning with buckshot,
carry sacks of feathers & food three miles along
a dried up creek to find someone’s changed the lock
or that they’ve forgotten their keys again or that no one
lives in those houses anymore. It’s not the idea of the thing
but the thing itself that cannot stay. All else being equal,
we are falling deeply in love with the space our bodies
take up, & it’s the love, if not the us, we beg: endure!

Contrails divide the sky into risk & awe.
There’s always a slim chance of crash
& it’s this proximity to peril that leans
us from the bleachers up onto our elbows,
cheeks heavy in our palms, palms impatient
for nails, suffering as it waits for meaning.
All our country’s colors, so stark at first, bleed
from the bellies of jets off into ether. Just
another unfulfillable promise. One more
reason to believe with all our hearts.
The clouds are the color of bone &
our bones are growing cold. Hiss, smoke,
& boom. How what looks like our death
rarely takes us. A single jet breaks formation,
dives down into the stands, just to rise again
without casualty, still burning with assurances.