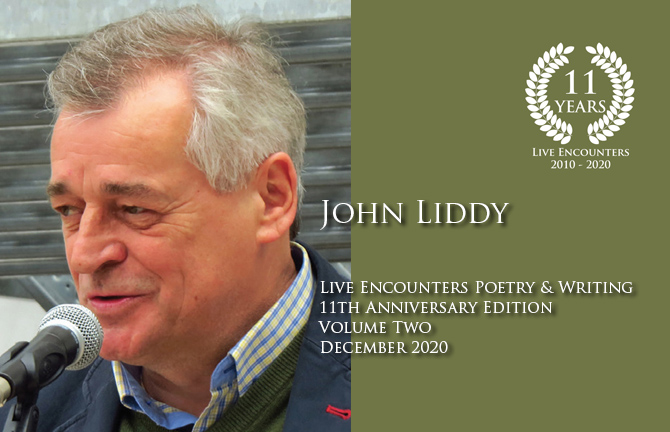 John Liddy, born in County Cork but raised in Limerick, is a poet whose 11 collections include Wine and Hope/Vino y Esperanza (1999, Archione Editorial Madrid), Cast-a-Net (2003, Archione Editorial Madrid), The Well: New and Selected Poems (2007, Revival Press), Gleanings (2010, Revival Press). His most recent book is Madrid (2018, Revival Press). He co-founded The Stony Thursday Book with Jim Burke and edits occasional issues. He is on the advisory board of The Hong Kong Review. Liddy currently lives in Madrid, where he works as a teacher/librarian. Revival Press page on Liddy  Photo ©Carmen Lafuente

One day I will go to Ardnacrusha to appraise
Seán Keating’s paintings in the flesh, admire
again the swans by the falls in Dún an Eas

the details in Lilburn’s and O’Neill’s maps,
Thorcor Town House from the 1450s,
the Ilen Launchilen from Windy Gaps

through gaps in the hawthorns and talk of old
beliefs discarded by science, the role of Gods
in the bought and sold of the modern world

back for some more of the wherewithal
from Mary Hanley and Nora McNamara,
who helped me scale a boundary wall.

Back to where I once held soft hands
on summer walks with those who will
always be young, back to the badlands

where I fell with my cross on my knees
as though in prayer, a dejected heart-scald
rising to face his woe, no longer ill at ease

back for an earful of local anecdote
to soften our cough for fear of losing
the run of ourselves, back for the fur coat

and no knickers on the bus into town
from a gas card not the full shilling but no
daw either, always on her Garryowen

mollafoostered and kicked in the taws
maryah, all that cats’ mallacky, dogs’
tobaccy for a lusher’s cause

who tells me he has a gee in his back-
yard and other paraphernalia in a shed
behind the pad, a nincompook

only too happy to drip-dry me with more
spoof no sooner calved than licked,
a man on his picky with notions galore.

Back to the oonshugh with a bee in her
bonnet and rent-paying flies in a bedsit,
who knows all about paddy power

and orange juice, electricity palpable
between us, a jab of a nyuck nuff said,
the bee’s knees, sensitivities incompatible

back with a piper’s welcome on the pig’s
back for the plerauca, accosted on a thor-
oughfare by the plucker-in selling ladies’

items for interested sheelas, a sheep’s
eye on skirt that passes brightly by,
an old segotia, a sham who pisstakes

Seán Hannigan who’d shaft you as quick
as a shoneen, a sleeveen who slinges
past the shidogue, always on the take

a skooralo for a side-kick, a smather of hair
on his smig, a cat’s lick upstairs, a smush
smullocking for hard tack on a sidedoor

without two pennies to rub together,
a gander at a galoot who suggested
breeding two gondolas on the river.

where ‘I would still find time’,
inferred Luther King, ‘to plant an apple
tree if the world fell out of rhyme’

where not even God can tell how
another man’s shoe is hurting him,
to where the weakest willow

binds the toughest wood, a delicate
colt becomes a competent horse,
where a hungry castle is a deficit

and sauce for the goose is sauce
for the gander but talk not fill
the stomach, where a silk purse

is not a sow’s ear, a ploughed field
never done by thinking, the hen
involved but the pig committed
its tail integral to the whole,
the hide its value, the old man
gone out to the donkey’s home


idle as a piper’s little finger,
fit to be tied with an urge to hit
out on the name of the father

at a fly-by-night, weak as a gosling
but as boastful as a shop cat, with
not as much as an amen in him

to where anything with the tongue
can be done, knowledge no burden,
talk put in a bottle by the young

or a White Boat or men with two
feet on the loft, or where I’ll get
the O’Kelly welcome anew

to where too much haste slows
things down, a swallow not make
a summer, whoever breaks pays

a knife not cut its own handle,
or trouble not trouble until trouble
troubles you, the test of the anvil

with a spit, where thought behind
a gift is what matters, to where
I can collop the wind.

I go back to find all is set to change
again, back to a new beginning,
a familiarity of recognizable range

a subtle vicissitude, back to never going
back because you are always in me,
your arias of consolation furrowing

in my vein, your sights and sounds
my gaothaire, a windbag in the be-
witching hour of putdowns

and uplifts pertaining to birthright,
macushla meggegging my sleep,
persistent as tide and aplite

to write you for the oncoming fold
out of my spleen, where your fable
will forever continue to be told

by a child straddling a Sheila Wee
outside the Castle, a walk to Gillogue
across the Black Bridge, along Plassey

and off the main drag for a spree
with a wise old quail, a cut of a lumper
modelled in bronze on Steamboat Quay

taradiddles of Gurky, Lanty on the run
explaining to his famished friends: t’was
the eel that ate the rashers in the pan

a mejum for the nixer and the tangler,
nothing for the thorny wire with no
sponduliks, others on the tobar

‘whatever you’re having yourself, a mhic’
says Gabriel, connoisseur of Tawny,
who once returned a tap to a smart aleck.

Back to fearless days without the near
invisible corrupting a handshake, a cough
on a bus a sign of a phantom war

good times without the pounding of heavy
artillery heard from Plitivice’s Nature
Reserve, peacetime and a striding beauty

in summer without a care, bright-eyed
as the dazzling water gathers in its threads,
conjures a cape like a cumulus cloud

‘feach na luimneacha’, ‘look at the coats’,
I hear her cry as she points at a window
display of Holman Lee-like models

the perfumed air adrift along the street
where I am in awe of all that you were, are,
will be, ethos, heritage, integrity replete.