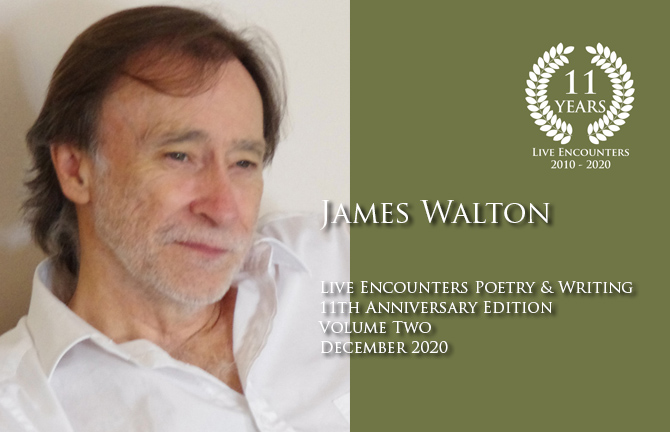 James Walton is published in many anthologies, magazines, and newspapers. He was a librarian, a farm labourer, and mostly a public sector union official. He resigned from an elected position in 2014 to write. His books include ‘The Leviathan’s Apprentice’ 2015, ‘Walking Through Fences’ 2018, and ‘Unstill Mosaics’ 2019. He has been previously shortlisted for the ACU National Literature Prize, The MPU International Poetry Prize, The James Tate Prize, Jupiter Artland, The William Wantling Prize, and is a winner of the Raw Art Review Chapbook Prize for “Abandoned Soliloquies’ to be published shortly, but as a full-length collection. He lives in Wonthaggi, Victoria, Australia, in a Federation house which was once a maternity ward.

knowing the full irony
of a mad obligation

that long leap of colonial decades

look to the south west

survivors of age and penury

if you stand into the gale
all it takes is breath

for two days it rained hearts

some closed doors and windows
others recalled things

by then it was Monday morning

how far can a tear fall?
all the way through a sob

as far as a one-way apology

I cannot go into the world again

I have been retooled, visioned
fresh tasked
My mission statement lost to blue sky
steering not rowing

There, you see
It was all reciprocal obligation
someone has to pay

Told you it was aesthete but you heard atheist

Yell louder if you want me to hear

If you do not listen
Something louder will come

Three steps too far
An unlistening pedestrian
The tram bells

An abandoned pram
Street sculpture for the sane

A shoe on its side
A seeking ice cream cone