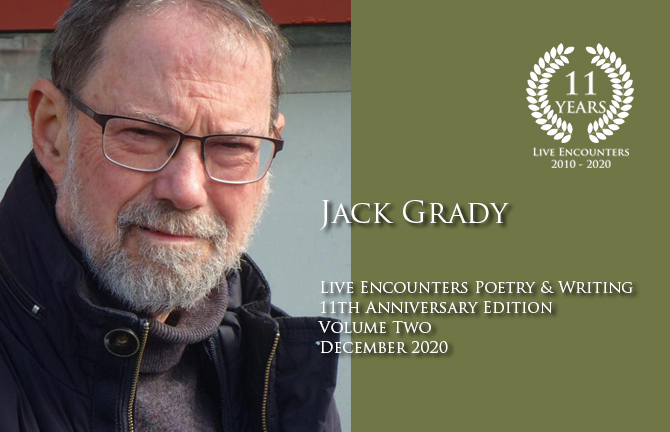 American-born Jack Grady is a war veteran and a founder member of the Ox Mountain Poets, based in Ballina, County Mayo, Ireland. His poetry has been widely published and has appeared either online or in print and in the anthologies And Agamemnon Dead:  An Anthology of Twenty First Century Irish Poetry; A New Ulster’s Voices for Peace; Poetry Anthology Centenary Voices April 2016; 21 Poems, 21 Reasons for Choosing Jeremy Corbyn; A New Ulster’s Poetry Day Ireland Anthology 2017; Poesia a Sul 1; 300K: Une anthologie de poésie sur l’espèce humaine; and Magnum Opus: An Anthology on Universal Oneness.  He read in Morocco at the 3rd annual Festival International Poésie Marrakech, as the poet invited by its committee to represent Ireland, and he was invited to represent Ireland at the 3rd annual Poesia a Sul, in Olhão, Portugal.  His poetry collection, Resurrection, was published by Lapwing Publications in October 2017 and was nominated for the T.S. Eliot Prize, and it can be ordered from their list of poets on the Lapwing Publications website or via their direct link to the collection, which is Jack Grady – Lapwing Store.

The following five poems, under the group title of Bathsheba Spooner Confronts the Fatal Cord are from a work in progress, entitled Unconsecrated Ground, in which Bathsheba (a.k.a. Bathshua) Spooner and other individuals involved in the events surrounding the murder of her husband and what followed speak from their graves. Despite the fact that she was pregnant, she was hanged in Worcester, Massachusetts, in 1778, for instigating the murder of her husband, Joshua Spooner. Those who actually committed the murder – Ezra Ross, James Buchanan, and William Brooks – were hanged with her. Eight other poems in this series have already been published by Live Encounters Poetry and Writing.

The first four appeared in volume 1 of the December 2018 issue of Live Encounters Poetry and Writing under the group title Unconsecrated Ground. They can be read here:

The second four poems in the series were published in the July 2019 issue of Live Encounters Poetry and Writing under the group title The Murderers of Joshua Spooner. They can be read here:

The Spirit of Bathsheba Spooner
Describes Her True Nature

You would understand me
if you had witnessed my way with horses.
No woman I knew could master
an unbroken stallion like I could.

And, whether seated
upon gelding, stallion, or mare,
I could never abide a pillion.
Even side-saddle I would not bear.

And, when young, I would choose men’s breeches,
wrap my feet and legs in spatterdashes,
disdain the gift of a riding habit
with hood or plumed bonnet.

I felt freest unencumbered by a cork rump
or bound by stays, breasts pushed up.
A-hunting I would gladly go with my daddy
rather than entertain in the parlour with mother.

O, ’tis true, when older,
I applied myself to etiquette
and to poetry and music, and made myself
mistress of the arts of handsomeness –

how I would darken
my lashes and brows,
whiten my face in Venetian ceruse;
redden my cheeks with cinnabar. –

In every way I made myself seem
the paragon of my gender
in both manners and beauty
while in the company of society.

But, with my daddy in the woods,
give me raiment of rawhide and coonskin!
If my father were Lucifer himself,
I would nonetheless follow his cause and our King’s

to Loyalist victory or defeat,
even to my perdition, if that’s where it would lead

Bathsheba Spooner’s Spirit
Describes the Collapse of Her Marriage

When Joshua Spooner
made his politics known,
I would no longer surrender
my flesh to that traitor.
I still played a wife’s role,
whenever the need arose,
by entertaining our neighbours and friends,
tolerated their banter and jokes,
held my tongue at my check
for as long as I could
every time I observed a smirk of disdain
at the mention of my father’s name.


I accompanied Joshua to dinners and balls,
and, at Sabbath, no matter how cold,
I shared with him our family pew
and suffered the sermons of Nathan Fiske
in both morning and afternoon.
In Worcester, I witnessed Joshua’s carouse
at the inn the rebels rechristened the Sun
upon burning the lion and unicorn sign
with its words – the King’s Arms.

You may ask the reasons
I wed such a wretch.
Could I not conjecture
the trouble ahead;
how incompatible were we?
Was I so insensible, so utterly blind?
Was I not in my right mind?

The Spirit of Joshua Spooner
Addresses His Wife

Why, woman, do you insist on disrupting my peace
with your incessant appeals to the naïve,
ever seduced into sympathy for you
for what you declare you endured,

those dullards so ensnared
by your litanies of adversity and despair,
they place every blame to my account,
even justify your crime,

as if you were the victim, not I;
as if I were the murderer, not you.
Why, woman, do you torment me this way?
Why won’t you allow me to sleep?

Isn’t it enough that you took my life?
I would never now dare, woman,
to call you my wife.
Fiend is what you proved to be.

I am not hidden in an unmarked grave.
I am honoured with a headstone, unlike you.
It stands off the West Parish Road
in the burial ground near Brookfield’s Green.

’Tis now inscribed with words for all to read
to remind them of what you did to me,
you and two lackeys of your tyrant king
and that boy named Ezra Ross,

the only soldier in you monstrous lot
who fought for Freedom’s cause.
He, whom I rescued from death
when I found him afflicted with fever

in the snow in front of our house.
He, whom I befriended and believed was my friend.
He, who lived with us, not once, but thrice.
He, whom our children adored.

That boy who joined Buchanan and Brooks
in the assault that took my life.
That boy, whom I loved as I would a grown son.
He, whom I discovered, in the clarity of my demise,

had betrayed me before, by sleeping with my wife.
He, your dear Ezra, your lover, your sweet;
he, my Judas, my Brutus I’d curse
if I were not rightly blessed with the mercy you seek.

The Spirit of the Reverend Ebenezer Parkman
Warns the Reader

by the gullible multitudes
who fancy his wife
a Juliet in a romantic tragedy,
while he, her victim,

she portrays as a villain
whose existence she deemed
sufficient cause for his extinction!
Heed not

that duplicitous woman,
for she bears ‘a golden cup in her hand
full of abominations and filthiness
of her fornication.’

And, like the scarlet woman,
that mother of harlots
‘drunk with the blood of the saints’,
she yet remains

drunk with the blood of her husband.
No, I vow she was no Juliet,
nor is she now,
for, even today,

‘false face,’ for her, ‘must hide
what the false heart doth know.’
Thus, conjure not her image,
lest you be charmed by it.

Read not her words nor listen
to their susurration in the wind,
for they mask the serpent’s hiss
and will sting you with their sin.

Sheriff Greenleaf’s Spirit Reflects on
the Hanging of Bathsheba Spooner

When, in gaol, I offered her the fatal cord,
she looked down, owing, I supposed,
to the shock of at last beholding
the instrument of her death,
the vehicle which that very day
would transport her to the place where she
would meet the Eternal Judge.

I believed that, upon seeing that dreadful thing,
she would faint directly at my feet,
but she remained standing without shudder or flinch,
nor did she cry out or even weep.
And when, at length, she raised her face to mine,
I was astonished to be greeted by a tender smile
and the radiance of her eyes!

She seemed undaunted and at peace
and thanked me for the precious gift;
assured me the noose she esteemed
more than a necklace of diamonds or gold.
And I was astonished again
when I read at the gallows the deathly writ
and she ascended to the platform to meet her fate

that her countenance remained serene
as she looked me in the eye and declared
’twas the happiest day she had ever known,
for she doubted not she would be in Bliss.
She owned she justly died, and, though she hoped
her friends she left behind would meet her in Heaven,
she wished none would travel to that divine abode

by means of the ignominious way she would go,
whereupon she announced she was ready
to begin her final journey. Her last words to me
before the hangman climbed the ladder,
fixed the knot, and hanged her
were that but a few years must elapse before
she hoped she’d see me and all her friends again.

Murderess and adulteress she may have been,
but, among the four put to death that day,
– and I can attest to this from what I saw
and the sounds I heard – that woman
was stronger than the men.