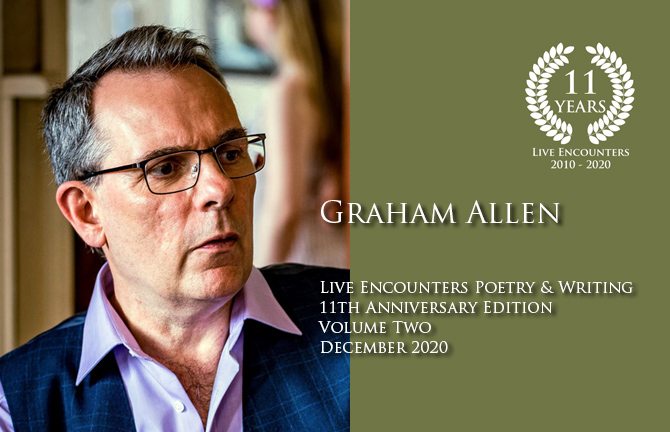 Graham Allen is a Professor in the School of English, University College Cork, Ireland. He has published numerous books, including Harold Bloom: A Poetics of Conflict (1994), Intertextuality (2000), Roland Barthes (2003), Mary Shelley (2008). He has published extensively on Kubrick’s films, including papers on A Clockwork Orange, The Killing, The Shining, Dr Strangelove, and A,I, Artificial Intelligence, and is currently researching a book on Kubrick’s contribution to Future Studies. Professor Allen is an award-winning poet. His poetry collections The One That Got Away and The Madhouse System are published  with New Binary Press, as is his ongoing epoem Holes www.holesbygrahamallen.org. His new collection No Rainbows Here will be published by Salmon Press in 2020. www.holesbygrahamallen.org
https://en.wikipedia.org/wiki/Graham_Allen_(writer,_academic)

On Not Being Wordsworth

Returning to the poet who returns,
Five years later, to a scene of meaning,
I cannot follow him in his design
Of open heartiness and feeling.

Today there is theme and theatre so wide
It defeats the great biographical tradition,
The task of the poet is to over leap
The tyranny of self’s ubiquitous dominion.

But I cannot forge a voice out of the slaughter
Of the natural world and all that dwells within it,
Poetry flails against talk in billions,
Most readers write me off as vatic.

We must renounce what once we loved,
Even Blake mistook Imagination
For something that builds a citadel on Earth,
The dirt under my feet was his gift to the Nation.

They all had the human at the top of a tree
We are now in the business of toppling.
Better then to lace your voice with elegy,
The game is up is a friendless lesson.

Better then sing an inconsolable song
Of the passing from the Earth of every mystery:
The lion in its pomp, the lizard in the grass,
The Orangutan and its peculiar glory.

Our children will curse our negligence
Over the salmon, the shark, and the bee,
They will wonder how we sat silent and sanguine
As the world was stripped of all vitality.

The world is dying and we are the cause,
It is emptying at a rate it cannot countermand,
We are the plague that desertifies,
The locust that works its way through the land.

We are the plague for which nature has no vaccine,
We are the plague that poisons every breath,
Every tick of the heart, every fold of the sun,
A disease that spoils every wonder that is left.

We are the worm concealed in the apple,
The canker on the brow, the midnight cough,
The sound of distant tanks as the family cowers,
Gleeful torturer who has never had enough.

The world is dying and it is dying from us,
We are the hole in the bough of the boat,
Those who would join the illustrious crew
Of past bards will have a knot in their throat.

The time is up on the majesty of man,
The time is up for romantic vision,
We’re destroying the ground underneath our feet,
We are the ship, the ice, and the collision.

The time is up for within and abroad,
The one life that rolls through everything,
Our lust has brought down the great chain of being,
Left the idea of correspondence in ruin.

There is nowhere now that we can run to,
No childhood in the hillside we can remember,
No best friend extolling the unity of metaphor.
Our figures are bloody, only serve to dismember.

The natural world is no longer our guide,
More like a timer attached to a bomb,
If poets survive then they are Cassandras,
If poetry survives, it won’t do so for long.

It is out of belated fear and adoration
That the chance of nature poetry dies,
All that is left are formal recriminations,
Mournful valedictions, craven alibis.

All that is left are idiotic rally calls,
Twilight tunes after all the gods have gone,
A strange, tipping day, final accounting,
The voice of the last man singing his song.