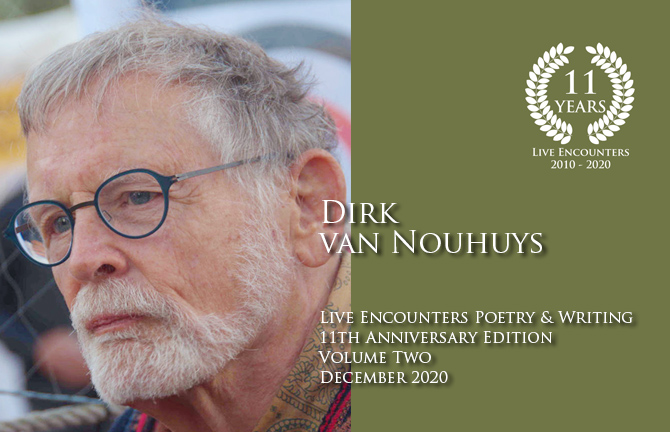 Dirk is a native of Berkeley with a BA from Stanford in creative writing and an MA from Columbia in contemporary literature. He worked for decades as a tech writer and manager for SRI’S Augmentation Research Center, Apple, Sun, and others. A few years ago, he devoted full time to fiction. He writes short stories, some experimental forms, and occasionally verse, but mostly novels, which have been published as excerpts or serially. About 80 items of fiction and a few poems have appeared in literary or general magazines. He occasionally publishes translations and photography. You can learn lots about him at www.wandd.com, and see a complete list of publications at http://www.wandd.com/Site/Publications.html.

A middle-aged woman, more heavyset than slim, with long brown hair streaked with gray, wearing khaki slacks and a blouse in muted paisley, strode into Hemadri’s office. She saw the face of the young man she had once loved hidden in that of the CEO, as the skull of some ancient hominid hides inside coarse and melancholy clay of a museum model.

“How are you, indeed, Hemadri?”

“Please be seated.” He gestured toward a comfortable leather chair, rose, went to the door, told the woman at the desk outside to allow no interruption and closed it. The office appeared luxurious to her, and she immediately understood he wanted it to look English.

Walking back to sit behind his desk he glanced at her profile, heavier but still attractive. She was not wearing a wedding ring. She was eyeing details of the room, he imagined with the keen sight she had used on potsherds. When he was seated he answered, with a sweeping gesture, “As you are undoubtedly able to apprehend, I have accomplished what brought me to this country.”

“Yes” she said, “I know a little about your career from my cousin, Anne-Marie Sutro.” Hemadri ground his jaws at fate that had left him a hostage to what Anne-Marie might say or not. He had no confidence in Anne-Marie.

“In learning from Anne-Marie you have the advantage of me,” he said.

He asked her about her flight from France, and they talked small talk for a while, of the weather, of how it differed from where she lived in France. She brought up how it differed from Patna in eastern India where they had known each other, but he merely nodded curtly. They talked about the traffic and freeways and the congested energy of the Americans. Then he asked her how she had learned where he was.

“From the Internet,” she said. “Then I remembered that it was that I had a cousin in this region. I had not known her, but I wanted to come. It was a caprice, powerful but a …” She paused, “a whim. Sometimes I am capricious. I wanted to see what the years had done for you.”

“So I got in touch with her through my family. Her father was the son of my uncle.” She paused and asked him if he knew about Anne-Marie’s father. He said they had not discussed their families. She described his career briefly and mentioned that he had killed himself when Anne Marie was 14. Hemadri nodded as if accepting a term of business negotiation.

“Listen, I contacted her and so discovered you were her client. I also had an interest in an archeological collection in Southern California, in UCLA.”

They talked for a time about the design work Anne-Marie had done for Hemadri. She asked him how he liked it and he said, “It was sufficient, appropriate; it is what wealthy men here in Silicon Valley have.”

He discoursed for some time on what he did, the technology, his wealth, and his increasing uncertainty as to his place in the company, something he had not articulated to himself until she sat before him.

Then Hemadri said, “I informed myself that you are widowed. Or course I have been negligent not to offer my condolences, let me take this opportunity to declare them.”

“Yes, of course,” she said and told how she had met and married a political organizer older than herself.  She described him as a serious, thoughtful, dedicated man with a wonderful sense of humor and how he had died of a stroke three years ago. Hemadri’s sense of this being somehow the same woman who had so remarkably given herself to him so long ago diminished as she spoke about her husband, and he noticed for the first time that she had a French accent. He wondered if it had always been there. She said that her loss was something she now felt herself recovering from, and at the same time knew she never would overcome.

“And I learned that you have two children.”

“Yes! Marc and Marija.” The village duty to have sons rustled through him and he fell silent.

“Her name is spelled with a ‘j’ ¾ I named her after a woman famous in my field.”

“How is it, to have children?” he asked. His feeling of intimacy returned. He felt they would use the intimate forms if they shared a language that offered the possibility. He half imagined for a moment that when they had been lovers he had pictured a life with her raising a family, but, of course, he had done no such thing.

“It was wonderful,” she said, “I use the passé because they are not children now. Not that I love them less, but now they are young friends. Our son is 21 –how old were you when we met? I don’t remember.”

“I was twenty years of age.”

“Twenty. Of course! And I was twenty-three so he is your age. He is gay. He lives with another student a little older.” In dark moments Hemadri had thought of his debt to fatherhood, but it had never occurred to him that that son would do anything other than marry a woman and have sons in his turn.

“He is studying civil engineering,” she continued. “He thinks archeology is for the old ones, and I’m afraid he thinks computers are destroying hand craftsmanship.”

Hemadri grunted, “But he uses one without a doubt.” He briefly considered asking about her son’s hardware to determine if he might be using a card of his design, but decided it’s technology might oppress her.

“For sure he does. Our girl, she is nineteen, is starting college. On the outside she seems like the other children, all cell phones and torn blue jeans, but she is really an intelligent, thoughtful person underneath. She does not have a boyfriend yet”

A poignant stab of shame pierced his heart about what a foolish, thoughtless child he had been with her in Patna, but he felt he had no right to speak of it.

“But it goes very quick; they are first the dear, fascinating infants; then they are still close to you but reaching out; then you love them and help them when you can.” She went on about raising her children. She gave him a feeling that she had been a conscientious and caring mother, but a little brisk. In conclusion she asked him, “But you have never married?”

He held his head still, frozen between nodding and shaking.

“When we knew each other, I never told you about how I came to the university,” he said.

He then told her about how his parents had sold him as an indentured servant and how he had run away, breaking the indenture, and his good fortune in being taken up by a professor who recognized his talents.

They had begun in mid afternoon, when the sun was behind the building, and the shrubs and mounded lawn outside his window were in bright shadow, but when he concluded it was early evening, and lags of yellowing light trailed across his windows.

“Oh Hemadri, I never suspected….I don’t know what I believed. I thought you fell from heaven. I was too green to ask.” She reached out to touch his hand. But the desk was too wide.

“There is an additional circumstance that must be recounted,” he said, “I am married.” Her hand slowly receded.

“You see, before my parents…before they made the arrangement I referred to, they contracted me in marriage, as was the custom in my village, to a local girl in a neighboring village. I didn’t meet her, of course.”

“Are you bound…?’ she asked

“I am bound. I betrayed one bond. I could not betray another’

“I see, and that is why you fled to America.”

“I did not flee to America,” he asserted. There was a snag in his voice. “I came to America because my teachers told me I had a future here.” He gestured largely to the building and organization around them. “You see I have done what they advised was possible, and more.” He leaned forward and lowered his voice. “And no one knew who I was or where I came from. In America you can accomplish being someone of what you make yourself,” he concluded fiercely.

He shook his head. “On no occasion.”

“But she may have married someone else!”

“What have the years done to her?”

“In my village, if a woman’s husband dies, and when the contractor came to my parents to demand return of the money he had given them, it must have been as if I died, her life is over.”

“But, Hemadri, what does that mean?”

“It means becoming a sort of servant in the house of my family,” he said. The words ‘my family’ were a rough, bitter tasting object on his tongue. He had never before spoken them as an adult. “Or,” he continued “in the house of her family, perhaps.”

“But you don’t know?” she insisted.

His voice became shrill. “No, I don’t know.”

“I have to put all that ancient history behind me.”

“I also wanted to come here so you could see what the years had done for me,” she said.

“Inevitably, the years are dead,” he said.

“Excuse me,” she said, “I have to go.” She rose, put out her hand. Standing they could shake across the desk. Then she turned and exited with brisk strides.

Hemadri walked to the opened door and watched her down the hall. No one was around except his executive assistant, who looked up at him questioningly.