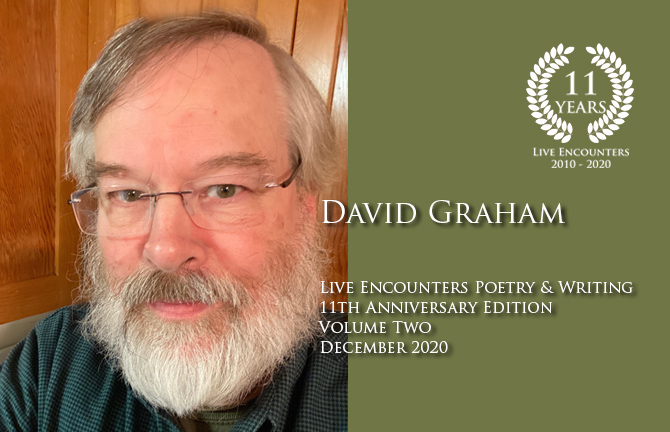 Most recent of David Graham’s seven poetry collections is The Honey of Earth (Terrapin Books, 2019). Others include Stutter Monk and Second Wind.  He also co-edited Local News: Poetry About Small Towns (with Tom Montag) and After Confession: Poetry as Autobiography (with Kate Sontag). Individual poems, essays, and reviews have appeared widely in journals and anthologies as well as online. He retired from college teaching in 2016, and now serves as contributing editor for Verse-Virtual (http://www.verse-virtual.org) where he also writes a column, “Poetic License,” on poets and poetics. He lives in Glens Falls, New York.

Everyone’s driving somewhere in America,
going to work or coming home, heading out
to visit the kids, or escape the kids, or just
lull the cranky baby to sleep with a quick trip
out on the bypass, which bypasses very little:
a few swamps, herons standing in the shallows
like lawn ornaments; a gas station or two
gleaming like imperial cities in the night;
maybe one bedraggled motel saying Yes
for forty years now—but there are never cars
parked in that lot. Whoever is expected
has not yet arrived, and that’s why everything
stays open so late in America, so you
can drive there, and buy things, all the while
singing the baby to sleep just moments
before you drop off yourself, O America.

My mother does not ask
where we’ve been, but
seems glad to see us.
We’ve driven a thousand
miles and lived our lives
half a year since the last
visit, which she does not
mention. Nor does she say
our names—another grim
milestone on this twisted
path down the bleak
mountain. When we turn
to go back to the hotel
after dinner, she says please
don’t. Then just looks
into space for a minute
before saying we have
no idea. We have to agree
with that. Again she says
don’t go. And we go.

Oh, I’ve seen bigger, believe me.
Many of us puff up quite regularly
while surfing big waves of idea
originating elsewhere.  A wave
which is not water but the force
moving through, we repeat
from some dimly recalled lecture
we once sat through, with hissing
radiators and squeak of chalk,
while our souls turned to mud.


I mean, size is temporary. Do
I have to remind anyone of
the bald lies told on tombstones
and memorial plaques?  Big
galloping words about Ozymandias
and his loyal entourage.  All of us
losers in time’s war, you could say,
but then, how would we know a winner?

Damn the stuck-in-traffic clamor of crows,
and the mindless wimpy cheep-cheep
of wrens at first light, and especially
the everyone’s-a-Coltrane whistles
of cardinals lording it over bush
and backyard walnut:  damn all birds
and their prehistoric whinges
dragging me like a waterlogged branch
from the murky eddies of sleep.

My sleep!  Damn the milky morning sky
so pale I want to scrawl great plumes
of black smoke across it.  Damn the shoes
in parallel on the floor exactly where
I left them at one a.m., or two,
and damn the rumor of toast and coffee
sneaking up the stairs as if this were indeed
a new day, with its own savor and song,
as if the computer screen were about to load
a screen so packed with good news
you could spend the day just linking
and linking.  And damn the unread books
sagging the shelves, and also those
read so long ago they have turned to dust
and lint and gray vapors, which is why
I wake sneezing and dripping, coughing hard,
exactly as if trying hard not to laugh.

Some kindred spirit shall inquire thy fate
—Thomas Gray

I like best the oldest old stones,
covered in lichen, letters blurred
and eroded like names written
in snow.  How even solid rock
will fade and shrink.  What are
hope and faith against
such long and steady rain?

Is it sad or not how even
names fall out of fashion
like Victorian gowns and hairdos?
Otto, Hortense, Edwina,
Harland, Meriwether, Theodora. . . .

It seems Jesus is anticipated soon
to walk this root-heaved,
much disturbed ground, but I
expect what I see:  cluster of crows
high in an oak older than
the century, late sun catching
sight of itself across polished
granite, pollen enlivening
the stiff arms of a cross.

So many babies deposited
here!  Four months and six days,
two years, a week—now they’re
planted next to aged mothers
and fathers, and all by now
exactly the same age forever.