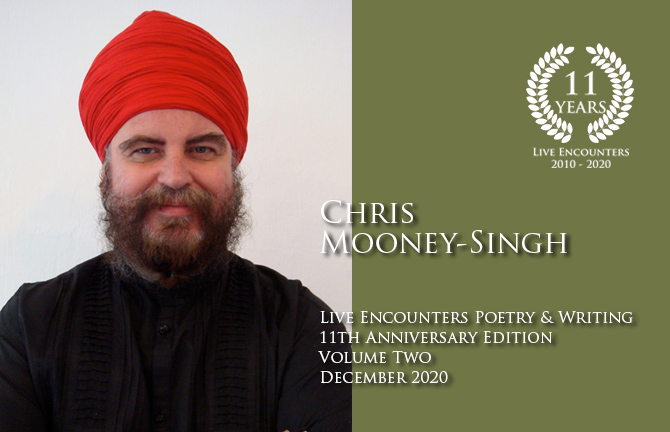 Chris Mooney-Singh’s last two collections The Laughing Buddha Cab Company and The Bearded Chameleon appeared in Singapore and Australia. His verse novel Foreign Madam and the White Yogi was commended in the 2015 Victorian Literature Awards (unpublished fiction category). In addition, he has completed a doctorate in creative writing from Monash University, teaches in the M.A. Creative Writing at Lasalle College of the Arts, Singapore and is Director of The Writers Centre, Singapore.

After many long months experimenting with the new fire-bomb medicine, I am pleased to send you plans for its use during naval warfare. Picture a hollow cast-iron mechanism packed with black powder, the size of a rice bowl. A wooden board weighted with stones is submerged. The dragon-king device rests inside, enclosed in an ox-bladder. Above, on the river’s surface, a slow-burning joss-stick (kept buoyant on goose and wild duck feathers inside a container) is launched downstream toward enemy ships in the darkness. At the right moment burning joss ignites the long fuse through an air lock of goat intestine setting off the submarine dragon-king. A great explosion will follow.

I am pleased the campaign against the invaders was successful and the device is in service. Today, after much deliberation, I humbly submit another design. This dragon-king is spherical, made of cast iron. The fuse ignites by enemy movement disturbing a trigger mechanism underground. Cords and axles rotate a steel spinning wheel. When trodden on, weights drop.  A pin-flint sparks the fuse. I recommend clusters of nine be dug into a grid of eight auspicious squares surrounding the city as per my diagram.

It is seven years since I left the court for my villa and peach orchards. As per your request I again submit a recipe for poisonous gunpowder in hand-lobbed or catapult-launched grenades. I advise this mixture of tung oil, urine, sal ammoniac, faeces and scallion juices be heated, then coated upon dozens of iron pellets, bits of broken porcelain combined with saltpetre, sulphur and charcoal. Even the birds in the air will not escape this flying sand bomb releasing ten thousand fires.

Greetings from the State Library, Melbourne. I found your treatise – ‘The Fire Dragon Manual’ researching my paper on Song Dynasty Inventions of the 14th Century. My husband, who served during Operation Slipper in Afghanistan, land of ten million mines doesn’t salute you from his powered wheelchair. No need for gory details. You know what’s worse? We survive with alcohol and a copy of Disabled Sex for Dummies, while his ghost legs walk somewhere around Kabul.

I humbly submit this in late summer when the last of my backyard peaches taste bitter.