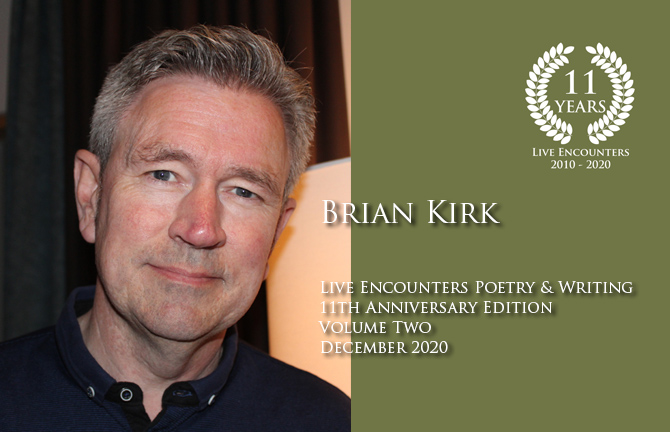 Brian Kirk is a poet and writer from Dublin. His first poetry collection After The Fall was published by Salmon Poetry in 2017. His poem “Birthday” won the Listowel Writers’ Week Irish Poem of the Year at the An Post Irish Book Awards 2018. His short fiction chapbook It’s Not Me, It’s You won the Southword Fiction Chapbook competition and was published in 2019. He blogs at www.briankirkwriter.com

Note: These poems form part of a sequence of formal poems entitled Freedom in Constraint responding to life during the Covid 19 crisis. The poems focus on the themes of isolation and social distancing and the wider issues and challenges to community and family arising out of the current pandemic. The sequence is made with support from the Arts Council of Ireland / An Comhairle Éalíon’s Covid 19 Response Award.

The face I see when shaving isn’t mine,
the features are the same, but they betray
a latent restlessness. My head’s okay
despite the fact I stayed up late, drank wine,
and worried for a world turned upside down,
my finger scrolling screen to find some news
that wasn’t grim. My brain’s become a bruise;
my name a mumbled rumour, hardly known.
The distance between mind and body’s slight.
The walk from bed to kitchen table takes
an age. I greet the morning with new eyes
but see each sunrise in the same old light.
The new day offers nothing between breaks
but memory, remorse, more damn blue skies.

This garden is the centre of a wheel,
the sun revolves around it like clockwork.
I use a spade to breach the crust, a fork
to break up clods. I pick out stones and feel
the sun’s heat on my back, my knee joints creak.
I’ve learned the difference between work and rest,
regret the years spent idling at a desk.
The blisters on my hand mark me as weak.
Repetition. Dig and turn clay over,
mop brow, savour these authentic actions.
The fearless robin eyes the wriggling worm –
she is so close. Give in to the lover
who is here, all others are distractions,
plant the seed, water and make firm.

All night I dream I feel the tide’s soft pull,
I drift, not waking yet nor sleeping still,
below are plankton clouds, cetaceans, krill.
The only sound is waves against a hull.
Moonlight-reflecting sea, a deeper blue
than any I have ever seen before. So calm.
Dismiss all thoughts of harbour, the sea is balm
for the worried soul, bathes me in its hue.
Eel-like, I twist, my limp body thrashes,
the blanket is a net, holding me fast.
The wind rises, a wave washes the gunwale,
thunder, lightning, the sky lit up in flashes.
I’m drowning but I grip the broken mast
and wake up on the far side of the channel

It is important that you keep your head.
There will be time again to go outside.
Pull the drapes, turn the TV up instead.
The life you lived abruptly simplified.

There will be time again to go outside.
Smoke from the neighbour’s barbeque annoys.
The life you lived abruptly simplified.
The soundtrack to each day is now white noise.

Smoke from the neighbour’s barbeque annoys.
You hear raised voices coming from next door.
The soundtrack to each day is now white noise.
Above the buzzing you hear a male voice roar.

You hear raised voices coming from next door.
You try to sleep, swallow another pill.
Above the buzzing you hear a male voice roar.
You want to say something but lack the will.

You try to sleep, swallow another pill.
Pull the drapes, turn the TV up instead.
You want to say something but lack the will.
It is important that you keep your head.

There’s nothing new or normal anymore.
An optimist might say we will bounce back,
but after months of this I’m not so sure

we’ll ever get to where we were before.
Our lives proceeded on a steady track,
now nothing’s new or normal anymore.

Take some time to stand at the back door,
breathe in and let your aching frame relax,
but after months of this I’m not so sure

if I can keep it up; I’m getting bored
with my own company, the wine and snacks.
There’s nothing new or normal anymore.

At night I lie awake till after four,
stuck on the same page of my paperback.
Now after months of this I’m not so sure,

this might be how things are for ever more,
crossing fingers, walking on pavement cracks.
There’s nothing new or normal anymore,
and after months of this nothing is sure.