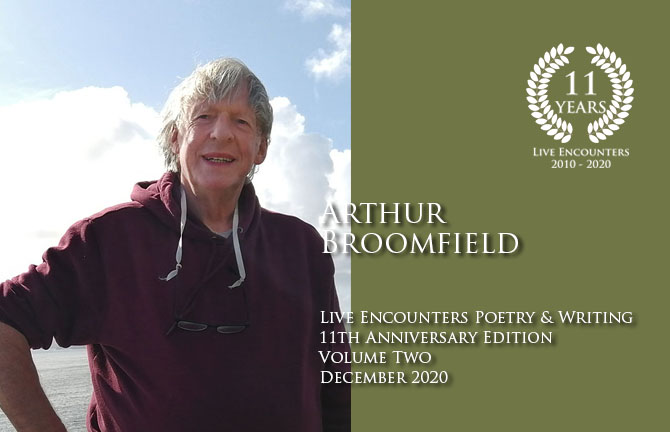 Dr Arthur Broomfield is a poet and short storywriter, Beckett scholar and occasional lecturer from Ballyfin County Laois. He is the author of seven books including three poetry collections The Poetry Reading at Semple Stadium [  Lapwing 2012] Cold Coffee at Emo Court [Revival 2016]  The Giants’ Footsteps at the Rock of Dunamaise [Revival 2019] and a study on the works of Samuel Beckett :The Empty Too : language and philosophy in the works of Samuel Beckett [Cambridge Scholars’ Publishing  2014]. He  delivers poetry and short story workshops and is available to mentor writing groups or individual writers and to give lectures on the works of Samuel Beckett and on Surrealist poetry. Dr Broomfield holds BA degrees in English and history from NUI Maynooth, an MA degree in English literature [NUI Maynooth] and a Ph.D in English literature from Mary Immaculate College, University of Limerick.

I hadn’t thought about what I’d signed up for till that night. I suppose those Nazi guards in Belson, and Auschwitz hadn’t thought much either. You can lose your soul in these places if you’ve got the herd instinct.

I’d been detailed for nights so I tried to get a few hours’ sleep before heading in good time for an 8 pm start. My destination, Allentown Prison, two miles from my rented rooms, set in the Bog of Allen, known as “the swamp”, to us prison officers. We’d been condemned to isolation there by some or other superior officer who thought his   life in Mountjoy might be easier in our absence. We didn’t much like being called officers, even the so-called Chief Officers were more akin to the corrupt cops in Serpico or Clouseau in The Pink Panther. We preferred to see ourselves as jailers, a step above the prisoners we got paid to lock up in the evening, release in the morning and hold our noses while they slopped out.

I knew something was up from the number of cars abandoned around the gate, yet another hyped crisis, I supposed.  Pat Moores opened the wicket gate in the steel-clad main entrance to let me in. He paused.

“Heard? Oh yes Pat!  I’ve heard alright. Heard that the pint’s gone up in Campions, that Molly Casey is pregnant and…and the adoring father-to-be is a popular jailer …and…”

“Shut de fuck up will ye, this is serious stuff”.

“You’re to go straight over”, he pointed towards D wing, the four storied main block of the prison that housed one hundred and eighty men. “Shergar’s orders”. “Shergar” was the nickname conferred on Chief Officer John Pius Ballaterd by consensus of the officers’ mess. Like the legend of the famed racehorse Ballaterd’s efforts to procreate failed to bear fruit. Enquiries from rookie jailers of the nickname’s origin could elicit an explanation along the lines of.

“It didn’t stop him from ridin’, I’d have christened him Scobie Breasley”.

“Leave his private life out of it Jim, he rose without trace”.

“Aye, firing blanks as he rose”.

Idle gossip was one way we could get at Shergar, collectively loved as he was, in the way his victims loved Pierrepoint. The curses and growls that could be heard coming from his office from time to time invariably inspired under the breath comments like

“some jailer’s goin’ to Cork or The Island “

“and the evil bastard ‘ll be shaggin’ the wife when he’s gone, promising her he’ll call on the influence of the sun, moon and stars, and his direct line to the Minister for potato stalks to get him back”

from jailers who would prefer Oliver Cromwell as their Chief officer.

“There’s war going on over there, and if I know anything Shergar’s at the back of it,” Harry Pilkingtown warned me, as he let me into the prison grounds through yet another barbed wire clad, steel reinforced portal, to an underworld of cigarette bribes, swapped porn magazines and unlikely friendships; the social contract that, in normal times, ensured the smooth running of the place. Tonight was not normal. I didn’t notice the incongruous roses this time, those red and yellow blooms that so impressed  visitors on their way to weekly visits to a son or husband, I just sped over to D1 gates where Jeremy Hitchins, key trembling in  hand, let me into the block.

Normally the prison would have settled for the night by this time. Except for a couple of trustees, working in the kitchen, or coming in from day release, or in the odd case, one returning late from court, prisoners would have been locked up by now. Sounds of radios, or a musical instrument, would echo round the block from the cells, bouncing back and forth along the dreary walls. Beads of moisture could be trickling down the bottle green painted plaster in damp weather. It was usually damp in the swamp. The red and grey floor tiles would be weeping. The four of us on nights, one to each landing, would be prepared for a long, uneventful stretch, patrolling the landings, routinely checking the cells through spy holes to check the mood of prisoners under close watch. I had my flask of coffee, beef sandwiches and a couple of Playboy magazines borrowed from my solicitor friend, Joey Morrissey, packed in a Quinnsworth bag.  All going well we might grab a nap while a colleague would cover on our landing.

It sure hadn’t settled down tonight. “You’re in time for the aftermath, Rob,” John Devann, a jailer who’d joined the service years before me, remarked drily. By the look of the place it would take a bit of time. It was swarming with jailers, all pale and stressed, some with tunics torn. Beds and tables had been pulled out onto the landings, prisoner’s clothes and shoes were in piles outside cell doors. It was clear enough what had happened. “It began after lunch with a sit-down protest there,” John gesticulated to the floor of D1, “they were banging their mugs and singing ‘We shall overcome.’”  Just like Martin Luther King, I was thinking, but what could a mob of criminals have in common with the heroic struggle for civil rights being waged by Blacks in the United States?

“The Governor cracked up, they say he’s in the nuthouse, and Shergar’s in charge now,” John said.

“So, what’s the story with the beds and gear, John?”

“Shergar ordered it. The only way to deal with the ringleaders”, he said.

“Some of them have nothing but a blanket wrapped around them. They won’t be getting them back tonight and that’s for sure.”

Shergar was hovering just ahead of me facing down D block. I scuttled round behind him to get to my post on the second landing. Below me groups of jailers were circulating round D 1 floor, peering at cell doors, trying to look alert, doing anything that might impress Shergar.   His slightly rounded shoulders gave him the air of a beast of prey as his beady eyes scrutinised all before him. Now and again he’d shift his weight forcefully from one foot to the other or sweep his right hand downwards along the breast of his chief officer’s tunic.  He oozed the aura of the man in control of something he’d desired for a long time.

Just then the strains of “Will you go, lassie go” filled the building. The sweet strings of a tenor banjo plucked the tension from the charged atmosphere. Some jailers smiled; others laughed. Shoulders lowered, and colour returned to cheeks.  It really was music to their ears and how they needed it. We all knew it was Fester Connell, an itinerant prisoner and naturally gifted banjo player, doing his bit to clear the high-octane voltage from the solitary confines of his cell on the second landing. Shergar drummed his baton against his left hand as he glared sideways and upwards toward Fester’s cell. He suspended his shuffling and the stroking of his tunic.

“Officer Lawdon, bring five men with you and take that instrument from that prisoner’s cell’.

Shergar’s peculiar talent was at its sharpest when identifying a man for a definite job. Lawdon, a six-foot two weightlifter, had a proven track record in brutality and like Shergar, would   have seen Fester’s intervention as a breach of discipline to be punished without mercy. I slunk into the recess of a cell door as he gathered up “volunteers” in his own likeness. “We’ll sort out this dirty lag and his tinker’s music for once and for all,” he was screeching at his troupe as they sped by me. Gazing straight ahead and fired with the intensity of a heavily outnumbered platoon of troops about to engage a formidable foe in a do or die fight to the death. None glanced sideways towards my hiding place.

I can’t be sure what happened in Fester’s cell that night, all I know is it wasn’t true to the Christian constitution I promised to uphold when I joined the service.  I know that Lawdon and five jailers charged into the cell because I could see it as it happened.  I know Lawdon screeched “Take off your shoes, take off your shoes.” I know there was a scuffle, followed by what sounded like fist crushing flesh against bone more than once. And I know it was Fester’s defiant voice I heard shouting,

“you cowardly bastard, I’ll get you yet you dirty arse bandit”

before two or three more blows, crunched against bone. I know the sobs weren’t coming from Lawdon. Soon after, Lawdon, his right hand covered in blood, his troupe in tow behind him, emerged from Fester’s cell, his left-hand gripping Fester’s banjo; one of his volunteers, Tiny Lavine, carrying a pair of shoes.

I still don’t know what sickened me most about that night but what happened next brought memories back to me. I’d been a Buddy Holly fan since the day he’d been killed in that plane crash in 1959 and I still played his records, even if they roused bittersweet feelings in me. But that night, in Allentown prison, was the day the music died for me. Lawdon slammed Fester’s cell door, turned the key expertly as only a jailer of years’ service can and to no one in particular announced “now we’ll see who’s the cowardly bastard.”  He pushed the key deep into his tunic pocket then grabbed the banjo in both hands, raised it high over his head before smashing it down against the rail that protected us from falling to the floor of D block. Splintered, it gathered round Shergar’s feet. I knew right then I should do, even say, something that could be heard above the brutality, that might make someone listen.  But the only voice raised in defiance was Fester’s. I can still hear him screaming “you cowardly bastard” and even if he was screaming at Lawdon I was the one who received the message.  I walked the perimeter of the landing, alone, “patrolling” as those in charge liked to call it.

Fester was huddled in a corner in his cell, shivering beneath the grey prison blanket Lawdon had flung at him, one eye puffed and closing, blood clotting round his nose and mouth. I glanced down to D1 floor. Shergar was walking towards the exit door, right arm around Lawdon’s shoulders, chatting to him and patting him on the back.

Residual guilt can haunt you for a lifetime. They say those who survived the death camps suffered most.