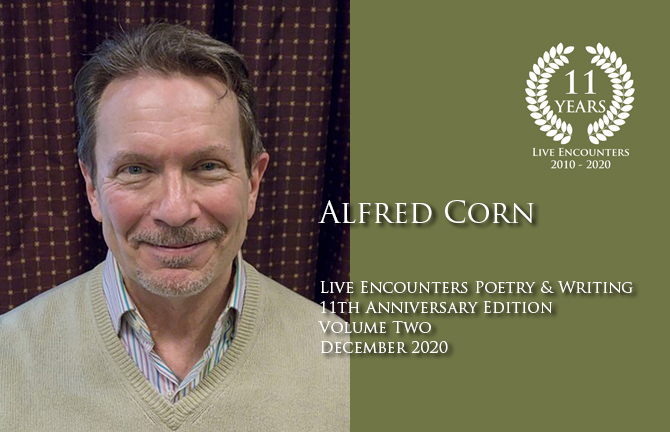 Alfred Corn is the author of eleven books of poems, the most recent titled Unions (2014) and two novels, the second titled Miranda’s Book, which also appeared in 2014. His three collections of essays are The Metamorphoses of Metaphor, Atlas: Selected Essays, 1989-2007, and Arks & Covenants.  He has received the Guggenheim, the NEA, an Award in Literature from the Academy of Arts and Letters, and one from the Academy of American Poets. In October of 2016, Roads Taken, a celebration of the 40th anniversary of Alfred Corn’s first book All Roads at Once was held at Poets’ House in New York City, and in November 2017 he was inducted into the Georgia Writers’ Hall of Fame.

A misdemeanor courtesy condemns,
But guilty of it we both were: “What I wish
You’d do…” “…is shut my trap.” “No, that’s not what…”
“‘Oh, no, I’d never speak an unkind word.
Ice-cream doesn’t melt in my mouth, sweetie.’”

Among your clever infra digs the worst was:
“Don’t be what everyone…” “‘…says you are.’”
Breakfast table cross-examination:
I’d try to try to shrug off those injunctions,
A ping-pong match that felt like doing time.

Bleak House. At length all litigation ends,
But desist in this case stalled until decease.
There’s no point now in mourning your refusal
Ever to settle out of verbal court.
And our first years? Still fresh, those memories….

Let’s interrupt them long enough to finish.
Terminal illness commuted rancor, judgment,
As you may have guessed when told I’d asked to see you.
Here’s an acquittal, drawn from your last “No.”
Case dismissed. Goodbye. You’re free now. Go.

Self-conferred: if your great-great-greats were born
to the last name of a planter, still your first comes
from Moms and Pops. And your nickname?
Friends will find something that fits.

Start with King Oliver, his musical throne built
on platters that did more than whistle Dixieland.
Whence came Ellington, among the dukes
who managed never to put ’em up, still winning
hands down through mastery of the indigo key.
Basie, too, was up for the count, swinging that eight
to the bar when the Lindy hop-hop-hopped up a big-band hall.
Lord knows Earl Hines and Erroll
Garner are on record for dispensing largesse
with all the generosity of their rank,
but to date no marquess or viscount
or baron has thrown down. We’ll get one soon.


Post mortem, can we dub their biopics
so that the titles list them as Knights?
Miles, Bird and Diz, all errant Sirs,
all thirsty in the Five Spot afterhours
for music’s Holy Grail. And then—screw
the arrests, the kangaroo courts, defendant unentitled
to basic consideration—she was and forever
will be Lady Day. Nobody’s business, heroine
in her way, the man didn’t get the last say,
no more than the fuzz nor the booze.
Miscarriage of justice: it wins for a while, not for all time.
Just ask Queen Latifah, who lately got to play
the sassy, downhome Empress of the Blues.