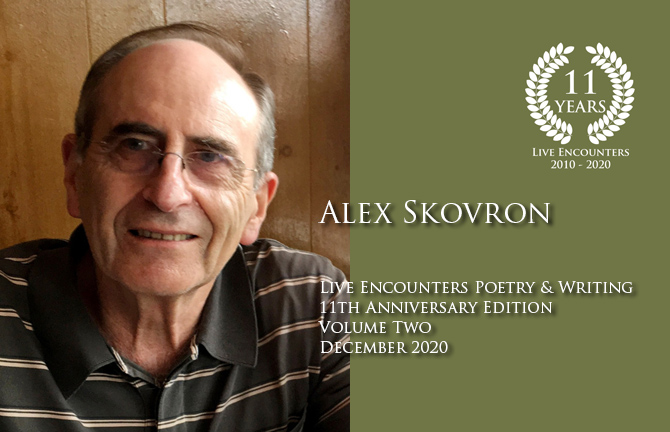 Alex Skovron is the Melbourne-based author of six collections of poetry and a prose novella. His most recent book of poetry, Towards the Equator: New & Selected Poems (2014), was shortlisted in the Prime Minister’s Literary Awards. The Attic, a bilingual selection of his poetry translated into French, was published in 2013; Water Music, a volume of Chinese translations, appeared in 2017; and his novella The Poet (2005) and collection of stories The Man who Took to his Bed (2017) have been translated into Czech. A new volume of poems, Letters from the Periphery, is due in 2021.

If Words Could Speak

If words could speak, why would they speak
their selves when they could
deputize a billion counterparts
to voice whatever needed to be said?
If words could sing, more nimbly than they do,
would they still need to be encased
in lexicographers’ brocade
while every tinted letter hummed along?
If words could dance, no alphabet we know
could entertain them to remain in place
but rather would they overleap the leaves
of print to learn unlettered flight?
If words could drown, would they subside
only to soundings where language swirls,
then re-emerge revitalized newclad
and dripping bright with intimations
of an unworded kingdom innocent of thought
and yet replete with mind?
If words could then aspire to everness
and watch their colours and their meanings flash
across the epochs as along a line,
why should we think so poorly of the world
that every word we speak draws us away
from every truth that every word would speak?

‘Rumour, the swiftest of all evils that are.’
(Aeneid, Book IV)