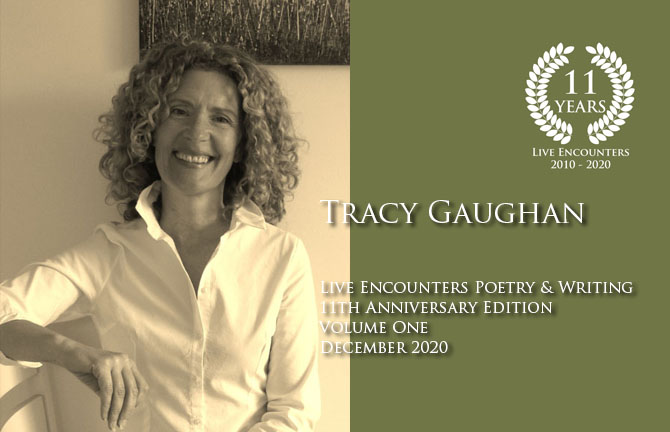 Writer and editor, Tracy Gaughan is based in Galway, Ireland.  Her poetry, fiction, and non-fiction work is published in Live Encounters, The Blue Nib, Headstuff and others.  She is IRL/UK Poetry Editor at The Blue Nib.

A woman flush with making a lie of herself,
put two shirts and a toothbrush
into a suitcase.  Put a makeup bag and a skirt
in there.  She put the sound of the car engine
and the orange light from the bedroom
in there.  She put the memory of a doll
whose shoes were always stuck to its feet
in the suitcase.  The woman emptied herself
of emptiness and put that in there.  Into the suitcase
she put birds returning to the telephone wire,
words coming back to a page.  She put the legislature
of a whole country in there. Into the suitcase,
she put her rage and her inability to convert percentages.
The woman put the pleasure of the sky and the juicy flesh
of danger in there.  So many times she wanted a lover.
She put his arms around her in the suitcase.  Kissed
his lips soft as air.  She zipped it up and rolled it down
the red carpet of her lover’s tongue.  He swallowed her
like a grave, with her shoes still stuck to her feet
inside the suitcase.

Below it the world is fluid and truths untrue
but I knew it was a woman went out
with hands full of words to shape the world.
She swam in my dream in a river with a pen
in her pocket, from some wily-eyed man tucked
into his notebook like a bird into its breast.
He made a song of the sound of her eyes: siren’s
gills opening and closing. ‘You were never here’
the song sang and he folded her like a wave
into a page, pilfered the pen, tossed it to water.


Swift-swimming after the writing instrument,
she was an anti-fish unschooled in the spawning
place of life vibrating below.  Swimming faster
than demi-gods fleeing, faster than autumn
evenings itself toward winter or the rowdy mouth
of a river reaches a state of being wordless –
every body of water is woman’s body,
a viscous second skin that easy snags on hidden
thyrsus, holds her back until some ragged hero
returns to let her go –


she emerges, out across wide land territories
of sea already drawn by men, sitting on rocks
like cormorants, waiting for ink to dry their paper
wings. Then a bird in the sky like a hieroglyph
on sandy wind from that cave at Serabit-el-khadim
and the silent speech of Canaanite women
dressed in red seeking heavenly blue, crying
for beauty and a lost land, making words
of pictures to remember it: the last leave-taking,
the first letter of the alphabet.


Rivers lead to thoughts not dreams, because I knew
it was a woman who went out with hands of words
to shape the world.  Her glyphs are hiding
in the letters, like a watermark.

He lay down, a dead wind in a pool
of himself.   A muscle rich
mountain-moving boy
left lumps the size of hillocks
on his legs.
His thoughts were blown leaves
spinning across the still water;
a fugue of horses breaking free.
He held onto them and fell
from the world.
If he could have lost the night
he would have tossed it
to some chance gulf beyond the dark trees
where his scarf still hung blue,
schoolbag empty,
pens in the moss.
He fell for years like that
swinging from a blue tail of memory
somewhere between heaven and earth;
before the fight and after.
He would never be sure of himself again.
Not sure as North for a needle is.
Nor would he dream of southwestern summers
by sea in lemon shorts, waving at me
from across a dune.
He would fall.
Fall again.
The horses’ hard-tempering reminder
of the forest where he once lay
helpless and waiting, like a leaf waits
for rottenness.

Centuries before NASA named it, before Bruhns or Hodierna,
two merchants rode out by camel by night en route to Samarkand.
To the land of silk and spices they trekked for weeks
through Tian Shan mountains, stopping at an inn built by a Khan,
half-buried in a gorge at Tash Rabat.  An old monastery courtyard

crowded with caravans, thieves, and browsing dromedaries. Dealers
traded silk for horses.  Blue dragonflies flitted about their ears,
underfoot lizards in yellow dirt.  A long-haired macaque
on the younger’s shoulder ate figs from a market in Xi’an.
The saddle-bagged riders withdrew to a domed stone room with a hole

in the roof.  And with heads joined as one looked up to see first stars
appear.  Elder versed younger about the rocks of fire Zeus flung at the sky.
Suspended midheaven he said stars watch the earth with eyes like patterns,
divinable as tea leaves in a cup or handfuls of sand cast on the floor.
There are titans in the stars that counsel what to sow, when to harvest,

how long the night. A god’s bull and golden ram that can say the psyche
of a woman or a man.    Fish bound by ribbons that bring the snow.
A crab in mist that tells a storm is long to pass.  A hunter hidden
in an hourglass.  But for younger the creatures were alchemy,
the universe vast.  Its stars mere shavings of a grated moon impossible

to construe.  So, from out a satchel, elder took a mirror, small, round,
and gold as an autumn leaf – a Venetian amalgam said traded for jade
in the deserts of Azerbaijan. He placed it in his palm, turned it up
to the roof and the mirror pulled beasts from the cosmos one star at a time.
They dropped like diamonds in a pool in his hand.  As night followed

night new patterns appeared and as earth rushed east, the stars drifted west
until younger read the sky in the mirror like a book, one page at a time.
One night, as elder lay sleeping, he put the axioms of tuition to use alone.
In the morning, tales of an unknown beast.  A monkey in the mirror.
Face like a walnut-shell big as the moon, breaching the eastern horizon.

Feverish with fascinations of new constellations and cometary theory,
the riders rode out to find Ulugh Beg’s finest observatory.
But they left behind younger’s macaque –
still trading figs for apricots, in trees atop the monastery roof.

Dear one, sometimes I’d catch you
growing more lovely by the window,
listing starboard toward the light

spending your eyes on starlings
grubbing in the garden.  I’d wonder
how you felt about their foot-strong

freedom to flock on a whim, to never feel
alone like water often does without colour
or taste.  In one molten-iron sun-glow,

I was aroused by a flourish of wrinkle
on your face.  It reminded me of what it was
between us and how it fitted once, inside

a yoghurt pot.  How it grew, with me always
soaking you up down to your roots, you
loving me like a mistake you were making,

relieved almost, when I’d walk past
you in the hallway like a forgotten
keepsake, thriving on neglect.

But relief is a fruit with juicy flesh
and my body was a cutting board, drenched
in the succulence of someone who wanted me

more than I knew.

You waited like something
with roots in the ground.
Waited all afternoon in the dust
for him to come back to tap a wall
plug through a shelf that would float
like a cloud in the atmosphere;
a redwood ghost above the fireplace.
You waited like a lover waits
a rendezvous at midnight:
certain, as the sea of the moon.
When the books and mementos
were shelved elsewhere,
you just lay there,
fresh and green as a leaf
unconscious of its falling.