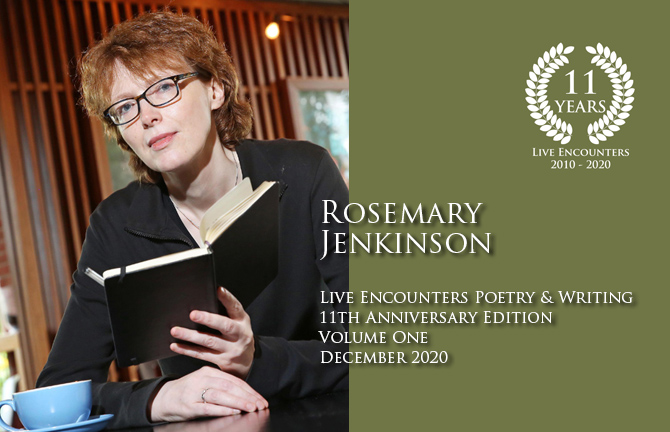 Rosemary Jenkinson was born in Belfast and is an award-winning playwright and short story writer. Plays include The Bonefire (Stewart Parker BBC Radio Award), Planet Belfast, Here Comes the Night, Michelle and Arlene, May the Road Rise Up and Lives in Translation. Her plays have been performed in Dublin, London, Edinburgh, New York and Washington DC. She was 2017 artist-in-residence at the Lyric Theatre Belfast. Short story collections are Contemporary Problems Nos. 53 & 54, Aphrodite’s Kiss, Catholic Boy and Lifestyle Choice 10mgs (Doire Press 2018). Her writing was singled out by The Irish Times for ‘an elegant wit, terrific characterisation and an absolute sense of her own particular Belfast’. Writing for radio includes Castlereagh to Kandahar and Two People Shorten the Road (BBC Radio 4). In 2018 she received a Major Individual Artist Award from the Arts Council of Northern Ireland to write a memoir.

Dia duit! (hello in Irish) How’s about you, you girl ye! (ditto in Ulster Scots). Many congratulations on your new post as Secretary of State for what we affectionately call ‘our wee country’. No doubt you will be ‘getting to know the craic’, as we say here.

I’m sure you are busy meeting the party leaders and special advisers, so I don’t want to encroach too much on your time, but I would love to take this opportunity to introduce myself. I am a Reader in Post-Conflict Reconciliation and Ethnographic Integration, but am now concentrating on my own writing (essays and, rather daringly, political poetry). If you would like to know more about me I refer you to my blog site: multicultural.r.us.co.uk. I am also deemed individually worthy of three paragraphs on Wikipedia.

As I mentioned, I’m cognizant of the fact that you will be inundated by political advisers and you may even be undergoing a period of cultural immersion, such as enjoying a glass of the black stuff (N.B. in Northern Ireland, glass equates to half a pint), but let me fire ahead with my chief purpose in writing to you. I am delighted that you and the Labour Party have arrived in Belfast. I was a great supporter of the wonderful London multicultural experiment under the leadership of Tony Blair. Multiculturalism has effectively dissipated the grass-root racism at the core of every white Englishwoman’s or man’s heart. And to those who say that this policy has exposed London to Jihadi threat, I can safely say that every successful policy is subject to minor teething problems.

I truly believe that you can transform the metropolis of Belfast in the same way and end the bigotry and terrorism that has beset this land since circa 1606. I’m guessing you have been briefed in your new adopted country’s history and, if so, please excuse the lesson, but 1606 heralded the beginning of England’s Protestant plantation project in Ireland.

I sincerely hope that you don’t feel, as other Secretaries of State have, that in being seconded to Northern Ireland, you have been exiled to Siberia. Northern Ireland has, to be fair to Siberia, some similarly beautiful scenery but has the greater advantage of being a fifty minute plane-hop from London. In my discusssions with otherwise open-minded English academics, many have expressed the opinion that Northern Ireland should be towed into the Atlantic and bombed. Of course it’s ridiculous but, even if it were possible to displace a landmass, I need only point out the obvious, that it would be doubly impossible due to our conjunction with the Irish Republic.

By now you will have met our local politicians who, I hope you realise, are not at all representative of us citizens as a whole. I can only blame the rural bible belt for voting in such creationist dinosaurs – though of course creationists don’t believe in dinosaurs! Please be assured that most Northern Irish people are forward thinkers like myself.

Without further ado, on the subject of forward thinking, here is my proposal:

To rapidly increase the immigration rate in Northern Ireland
until every other household is non-indigenous.

To me, it is logical that if fifty per cent of households are from an ethnic minority, the identifizing of districts as Protestant or Catholic cannot be maintained.

Hold on, I hear you saying, this is a bit radical, even for someone such as I from the Labour Party. I would point out to you at this juncture that the Labour Party, in my opinion, has ceased to be radical these past twenty years, so it is time for you to reseize the radical nettle. But, I hear you say, isn’t this merely an example of a crackpot theory pedaled by an inhabitor of an ivory tower?

The answer is that I do not live in an ivory tower; I live in a suburban semi. What I’m proposing is an example of real-world thinking, based on clear empirical evidence derived from my own experiments within our family unit. Let me tell you about my own case study. I and my husband have one natural, let’s say in this case indigenous, son, Emmet. When Emmet was two years old, he returned from nursery and uttered the words: ‘I don’t like black people’.

Needless to say, like all right-thinking parents, we were horrified. We had expected him to pick up colds and infections from nursery, but not racist dogma. Emmet was unable to explain his illogical assertion, even though we had repeatedly impressed on him the importance of reasoning skills. And things were about to get even worse when the following day he expressed an inexplicable distaste for children of a Catholic persuasion. It was clear that we had to do something.

So this is what we did: we went ahead and adopted little Changying from China and Constance from the Sudan. Constance, I think it advisable to point out as one must never assume, is black. When we ask Emmet now what he thinks of black people, he hugs his little sister and brother hard. Sometimes a little too hard, but he is working on it! I admit there has been one incident at the nursery but, in Emmet’s defence, in no way did he bite the boy because he was a Catholic. It was because the boy wouldn’t let any of the girls on the slide. Yes, as you may gather, Emmet is a proud feminist too now! We fully backed him vis-à-vis the nursery as sometimes violence with a point is necessary. Or even violence with two points (I refer to the two incisor indentations!).

It may seem that I digress but the point is that family integration can be replicated within society. Too long we have had to suffer sectarianism here. No doubt, like many politicians from the mainland, you regard our views as ‘medieval’ which is a tad inaccurate as Elizabethans and Cromwellians had even stronger views on religion than any self-respecting Medieval.

Your adoption of my proposal (adoption being the apposite term!) would have an even larger benefit for society. Many white, Protestant/Catholic  areas  have strong antisocial elements as they are not used to considering the feelings of their neighbours. An ethno-religious mix would mean more people putting out their bins and fewer hoods speeding around on mobility scooters. Of course, I am not advocating the removal of families from their houses to make lebensraum for the new immigrants. That, to me, would be Hitlerian. I am simply advocating a programme of new social housing.

Currently, one of the main hurdles to inter-ethnic progress in Northern Ireland is the Irish language. I found myself beguiled by the Irish language a decade ago, so much so, I attended a class run by an ex-terrorist (a self-termed freedom-fighter) in the Culturlann. However, I have since lain down the language of the leprechaun and have become hugely disenamoured of the white supremacism of this language. Instead, I have been learning Chinese and Sudanese in modest anticipation of a far-seeing Secretary of State such as you adopting my proposal. I mean, why would any sane individual support an Irish Language Act? In pure number of speakers, a Polish Language Act should take precedence.

My one plea to you is, let us take the anger of Irish politics. Let us take the ‘ire’ out of Northern Ireland. If we are merely left with the words, ‘Northern Land’, that is enough: a land where everyone is different, yet because of that difference, is the same; a land that is a transnational ray of light.

I truly hope that you will take the time to consider my proposal. I recommend a trip round the peace walls that divide Catholic from Protestant, so that you can see for yourself the perniciousness of our society as well as taking in some of the attractive butterfly murals. If you wish to contact me, I would be delighted to speak to you at length.

Wishing you all the best with your new tenure,

Congratulations on your recent appointment. As an expert in Post-Conflict Reconciliation and Ethnographic Integration, I would greatly welcome an opportunity to meet with you and discuss how we might help transform Northern Irish society.

I realise you are busy, but I trust you will grasp this once-in-a-political-lifetime chance to hear about my exciting new proposal. Please don’t hesitate to contact me.