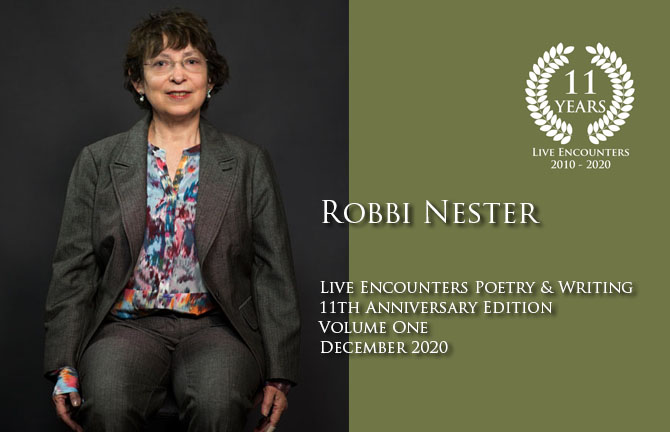 Robbi Nester has spent countless hours working on poetry projects during the pandemic. This has resulted in 4 books, one still in process, including an anthology, a chapbook, an ekphrastic collection, and a general collection, all seeking homes at the moment. Her most recently published book is Narrow Bridge (Main Street Rag, 2019). Her poems have appeared most recently in Silver Birch Press, Live Encounters, Pirene’s Fountain, and North of Oxford.

The following poems are from Robbi Nester’s collection in process, Permanent Records.

I didn’t choose to be the odd one, and didn’t
even know I was until I clutched the crayon
with the wrong hand, couldn’t wield
a pair of scissors or cut meat, took an age
to learn to tie my shoes. Cursive was a bear—
my pen grip graceless. Later, I burned
my forearm ironing, inked a blue streak
to my elbow when I wrote. To learn
from anyone was hard; I had to find
my own way in. By the time I started
school, teachers and parents didn’t
force a child to switch. And yet
they couldn’t help remarking on
the difference, visibly flinched
just trying not to seize the pencil
out of my left hand, put it right.
I learned it’s always been this way—
the left was gauche, fear of the atypical
rooted deep in history, when difference
marked a more essential flaw.
And still today, people in some places
use left hands in lieu of toilet paper.
When I was small, I thought I was the only one
who stood appalled before the chalk board,
who never knew the answers. I learned
that there were many ways one could be
different, and that people fashioned
gadgets making it easy to be odd,
though it’s still hard to be the odd bird
out, the bowerbird among the crows.

When I was 15, my father spread the newspaper out
wide on the table, and called me over, pointing
to the help wanted listings. “It’s time you took
a job,” he said. “You’ve been a child too long.”
By my age, he’d held many jobs. His favorite
had been wiping down the horses at the track,
filling feedbags, eying the jockeys, short
and muscular like him, wearing their shiny
silks. Later, he built radios in the room he
shared with his three brothers. All I did
was read and draw, talk on the phone,
and shop for shoes I didn’t need.
My parents never urged me to do chores,
insisting I couldn’t do them well enough
to be a help. They didn’t expect much,
didn’t think me able or intelligent.
The closest job was at a bakery
in Oxford Circle, where the trollies
took a turn. I imagined I could learn
to bake, though at the time, I’d never
baked a thing. Yet they hired me,
gave me an apron, taught me to fold
cake boxes, the pink of Pepto Bismol,
how to bind them with black string.
It helped I knew the names of every
pastry in the case: eclairs, glazed
with ganache and oozing cream, crullers,
rugalach, and my favorite apple turnover
that shattered into shards each time
I took a bite. I folded each one in a square
of tissue paper, careful not to squeeze too hard,
smiled politely as I took the money from the first
customer, her quarters slick with summer sweat,
her wilted bills, stood on tiptoe to hand the box
across the counter. But the bow I’d tied didn’t hold.
A dozen Danish rolled like hubcaps across the neatly
swept linoleum. Next customer, a box unfolded,
the chocolate layer cake falling, frosting first,
at her shocked feet. That was the first time
I had worked for pay, the first time
I was fired too. But not the last.

I found my father’s steel-edged magnifying glass
buried in a kitchen drawer. I was four, knew
even then the kitchen was dangerous, full
of knives and other tools that might draw me
to inspect sharp edges, but that day it was
the magnifying glass, empty eye, ballooning
scissors’ edges into an arctic ice field, woven
out of metal threads. I stood on tiptoe, lifting
out the lens, and ran outside into the sun,
the pavement busy with red ants, each
carrying a morsel  of dropped cookie
to the nest.  I held the glass above them,
inspecting their small bodies, tiny hairs
wavering like seagrass on their backs,
until the grass began to smolder, and
the ants ran everywhere. It was my first
experience with power, the cruelty
of curiosity, a fire I couldn’t quell. Who knew
that just by looking I might destroy a world?