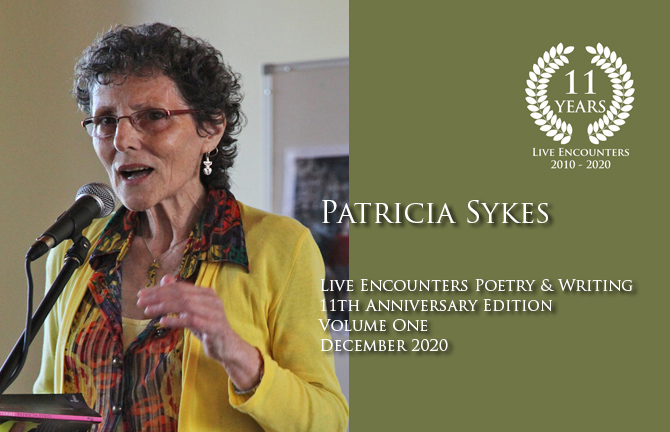 Patricia Sykes is a poet and librettist. Her poems and collections have received various nominations and awards, including the Newcastle Poetry Prize, John Shaw Neilson award and the Tom Howard Poetry Prize. Short listings include the Anne Elder, Mary Gilmore, and Judith Wright Awards. She has read her work widely, including on Australian, Paris and New Zealand radio. It has also been the subject of ABC radio programs, Poetica and The Spirit of Things. Her collaborations with composer Liza Lim have been performed in Brisbane, Melbourne, Sydney, Paris, Germany, Russia, New York and the UK. She was Asialink Writer in Residence, Malaysia, 2006. A selection of her poems was published in an English/Chinese edition by Flying Island Books in 2017. A song cycle composed by Andrew Aronowicz, based on her collection The Abbotsford Mysteries, premiered at The Abbotsford Convent Melbourne — now an arts precinct  — in 2019.

Drift wreckage and spumous air.
Flags of kelp thumbing a lift
with the incoming tide.
Mouths caught among the drag
gasp at the speed of it
that pummelled ride to shore
that burn of salt and sun
the potent reek of it
lodging in the pores
like an infinite lifetime.


the foot shuffle
of human cause is
so clumsy beside the grace
of birds. The swift step-step-pause
of hooded plovers so delicate
among rock pools, relics,
they live too warily
to ignore the signs
theirs not to deny
that this is a wormhole year
on minutiae watch
as death comes roaring
like a passionate wave.

Land wears its scars heroically.
The body’s are miniature seismic.
Circulation’s pins and needles
cannot reattach you to what you were.
Absence crept in and changed you
as you wrote lines. Now you
are daughter to a new self.

How many hours did the clock
deduct while your mind
was gone? Your pulse
so glad to hear its own
oosh oosh staggers
out to embrace
the arriving chill, sun

so low on the horizon
spine has to tiptoe its vertebrae
to catch the rim. Hush, there’s
a twilight to be enjoyed
a night slept away, a slew
of pages in your hand, written
in your own original (perhaps)
today as you were dying.

The woman doodling her particulars
I know her I think. She sings and is
no seraphim, speaks and is no seer,
her voice not the first voice, her name
not the first proper noun. Digestion
sometimes appals her. Gut-ache is
not particular: kōlon, cōlon, colonic
can amass to gripe, pain shared, on
colonial turf when all’s said and
done, history’s to excise or ignore.
Survivors must nourish themselves.
Kissed by each other’s bacteria
(your yeast, my bread, your
life, my breath) our warm
flatulence bouquets the air
indiscriminate, bared.