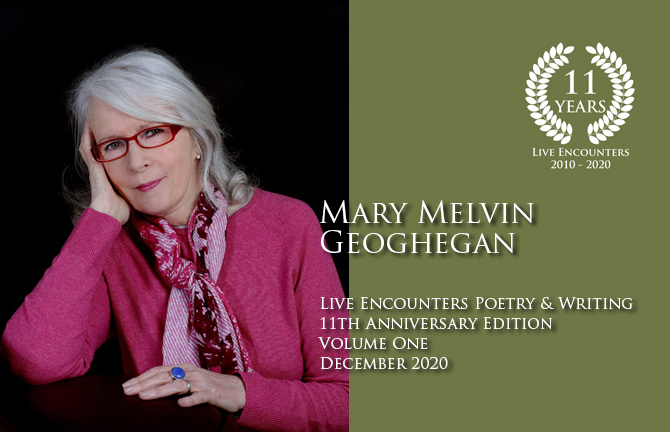 Mary Melvin Geoghegan has five collections of poetry published. Her most recent As Moon and Mother Collide with Salmon Poetry (2018). Her work has been widely published including Poetry Ireland Review, The Sunday Times, The Stinging Fly, The Moth, Crannog, Skylight47, Orbis185, Hodges Figgis 259th Anthology, Live Encounters and Poem on the DART amongst others. She has been shortlisted for many awards, including the Fish Poetry Prize, Francis Ledwidge, Curit New Writing, The Rush, Padraic Colum, the Jonathan Swift Poetry Award and won The Longford Poetry Award. Currently working on a new collection There Are Only a Few Things to be published with Salmon Poetry.

From That First Day

the moment was webbed
nothing living in isolation.
How, the world was contracted
in a secret sympathy with itself.
There was power in places
where landscape met its own.
In the transient of waterways
and the crucible of mountains.
There was strength in all.

At the Start of a New Week

there’s a hare on the hall table
by Hans Hoffman (1585) almost identical
to the one I saw years ago
in the Albertina Museum, Vienna by Durer.
I bought the magnet –
Now, that hare sits ready to leap from the fridge door
clearing a path through the undergrowth
halting before gratitude
and the heart of the woman
who had brought our choir
to stand before it.

How in Ballyseedy, Co. Kerry
during the Civil War, in March 1923
nine republican prisoners
were bound to a land mine
before, being blown to smithereens
by forces of the Free State.
Who only a few months previously
had fought side by side
with the same comrades.
And for days afterwards
birds were seen eating their flesh
from the trees at Ballyseedy Cross.


Only one survived Stephen Fuller
who was thrown into a ditch
and managed to escape.

We googled his old home
–  Zwolle in the Netherlands.
And before I knew it
he’d slipped from the stool
and was a seven year old
running down the lane
joining friends waiting for him.
That day they were planning –
and then a swim in the pool across the road.
When he returned
he talked of  a wisteria fringing the front door
as it had always done.
I noticed how well the house looked
after over eighty years.


While at the keyboard
we then visited my old family home
on Old Finglas road in Dublin.
It hadn’t withstood the years as well.
The garden could have done with my Dad’s clippers
and the dark blue walls
aged the house – giving no hint
of all the life, joy and disappointments
that had emanated from all within.

an ivory strip –
On the floor of the Hohle Fels Cave
carved from a mammoth tusk
with four intriguing grooves.
puzzled –
Until archaeologist Veerle Rots
began feeding plant fibres
through a bronze replica.
Discovered –  four strands
could combine to form a rope.
So this was how our stone-age ancestors
created rope and twine for fishnets,
snares, traps, bows and arrows.
A technological milestone
saved on a strip of ivory.

Moments That Do Not Last

but, somehow endure
in that common miracle of presence.

Between you and me son
and this limited routine
wearing a mask –
always, checking going outside.
When you first came five months ago from London
I wasn’t sure –


Yet, a love
so familiar but separate
unlocked.