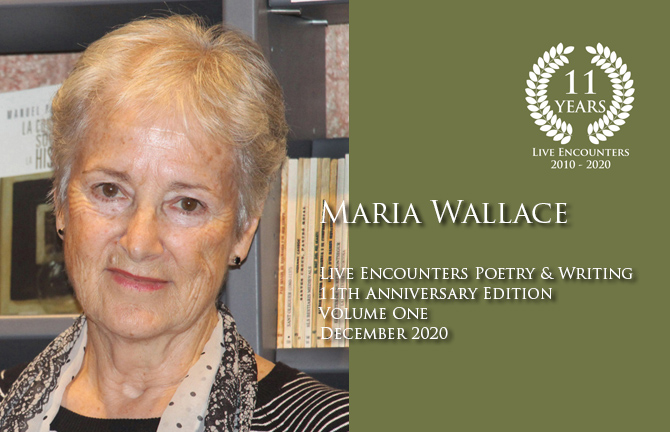 Born in Catalonia, she spent her teenage years in Chile; later settling in Ireland. She has a BA in Spanish and English Literature, and an MA in Anglo-Irish Literature. She has won many national and international prizes, amongst them The Hennessy Literary Awards. Her work has been published in Ireland, England, Italy, Australia and Catalonia, in book collections and magazines. She has published two bilingual poetry tomes (English-Catalan): Second shadow and The blue of distance. She founded Virginia House Creative Writers, which she still facilitates. Included in the UCD poetry archives, now she facilitates a weekly writers group there. She judges prose and poetry for the Jonathan Swift Awards. She has taught French and Spanish, and as a painter has been commissioned to work on different subjects. ‘The Stations of the Cross’ in the Oratory of The Square Shopping Centre in Tallaght is amongst her work.

The power of the line

Writing, that’s what I do,
not brilliant writing,
not glittering fiction but the beading
of precious words,
semi-precious stones assembled
to form a chain of sentences,
sparkling necklace put together
with feeling,
polished surfaces
catching sunbeams.


Writing, the need to compress
and give shape to some thoughts,
shape to something as ephemeral
as life and mist.

I’m fashioning a rebirth
from a place of nowhere to here,
to the page, to a vocabulary
that falls short
to describe an act of faith,
a re-emerging of the self
back into the everyday,
into the power of the poem.


To that purpose
I repeat words,
form sentences in an effort
to clarify meaning
and give power
to this invention.

Once she entered the mirror
not knowing
the reverse view was different.
She walked on dazed by the light
of the smooth surface.

The polished,
shimmering sands
were so inviting,
she forgot that beyond it
there was a stormy sea,
gigantic waves,
devouring sea monsters,
unforgiving depths,
an underworld from which
no one ever returned.


She trusted
the clear face of the mirror
not knowing how easily it lied.

Nobody noticed the shadow shifting behind the greenery, and even if they had, they would not have believed their eyes. The drooping leaves of the palm trees took odd rhythms and shapes under sea breeze.

Strange birds squealed and screeched in the shrubbery around them.

Cuba Libre cocktails and other sweet alcoholic mixtures eased them into a feeling of security, into the evening’s witchery.

Amanda, as always, refused to take what they were having, though felt the edge of temptation each time some skillfully concocted mixture, topped with multi-coloured umbrella, cherry and olive was brought to the table. She could not, literally, tolerate alcohol. After half a glass of wine the tip of her fingers began to itch, after a full one the palm of her hands turned bluish,

took a life of their own and could not keep them from fidgeting with anything within her reach. Embarrassing.

Sober as she was, she did not see the prowling figure because she sat

with her back to the beach, and the muzzle flash was lost in the light of the many red and pink globe paper lanterns hanging in a cave-like ceiling of branches, reeds and greenery in the patio.

Clear headed, she should have noticed the unusual, pervasive

squeal and screech in the undergrowth, know that the unease she felt was real, not a sign of her annoyance seeing her friends in such a state, especially John slumped over his chair. She did not know his fixed gaze wasn’t due to the beauty of the starry sky.