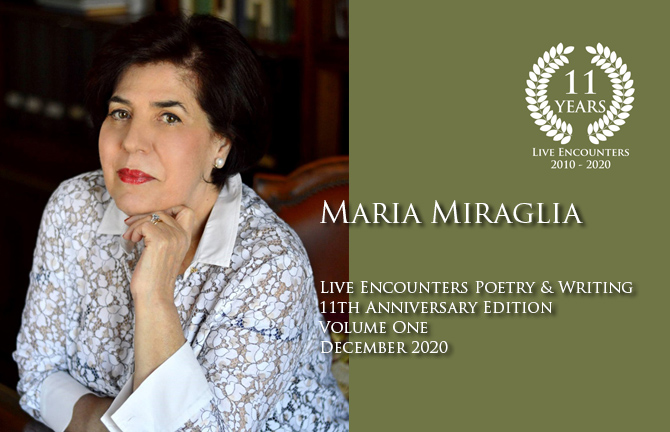 Educationist, poet, translator, essayist and peace activist. Maria A. Miraglia was born and lives in Italy. She graduated in Foreign Languages and Literatures, got a master’s degree in Evaluation and School Orientation followed by one more in Modular Education, an HLC from the Trinity College, Edinburgh. Teacher of foreign languages in public high secondary schools and a ministerial lecturer for English language teachers. An active member of Amnesty International, of Ican, of the Observatory for Human Rights, Deputy President-Coordination, at the child rights global organization, United World Movement for Children(UWMC), Kenya, she herself founder and chairwoman of World Foundation for Peace. Dr Maria Miraglia is a founding member and the Literary Director of the Italian cultural association Pablo Neruda and a member of several international editorial boards. She collaborates for poetry with national and international magazines. Her poems are translated into several languages and collected in numberless anthologies. Among her recent poetry collections: Star Dust, 2018; Confluence, 2019; Tra Realtà e Sogno and Labirinto di Pensieri, 2020. She is a recipient of several recognitions and awards

Don’t Smile at Me