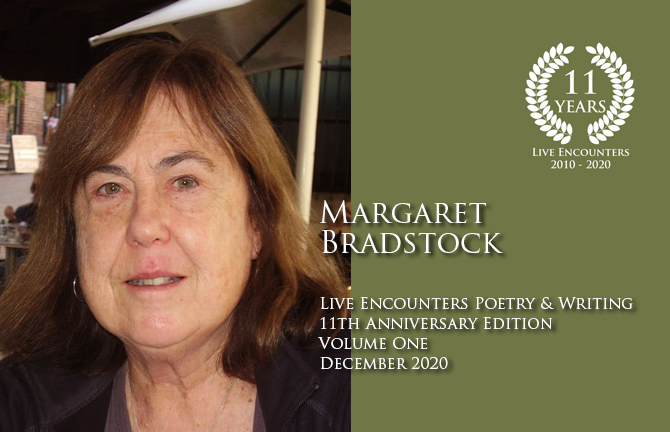 Margaret Bradstock is a Sydney poet, critic and editor. She lectured at UNSW for 25 years and has been Asialink Writer-in-residence at Peking University, co-editor of Five Bells for Poets Union, and on the Board of Directors for Australian Poetry. She has eight published collections of poetry, including The Pomelo Tree (winner of the Wesley Michel Wright Prize) and Barnacle Rock (winner of the Woollahra Festival Award, 2014). Editor of Antipodes, the first Australian anthology of Aboriginal and white responses to “settlement” (2011) and Caring for Country (2017),  Margaret won the Banjo Paterson Poetry Award in 2014, 2015 and 2017. Her most recent book is Brief Garden (Puncher & Wattmann, 2019).

Ships first appear like angels’ wings
sprouting from god-like backs, breaking
the plimsoll line of horizon
that divides water from sky, parabolic
dunes from white coastal cliffs.
Natives in rough dugouts
make no move to paddle out, examine
the massive apparition
ploughing through their waters.
A mirage of sunlight
it would disappear.

Near Brush Island, Cook and Banks
attempt to make anchor
the seas too rough, surf
towering like glaciers.
From a distance they (re)name
landmarks: Dromedaries Head, Jervis Bay
the shadowed dome of Pigeon House
chasing the coastline. Smoaks are seen,
at night five fires, the land rather
more populous than first surmised.

At Murramarang Point
the complex of 12,000 year old middens
stretches through history
meeting place for Wandandian
and Walbanga tribes
the headland a burial ground
for massacres by local pastoralists,
ancestral skeletons eroded
out of sand deposits.
Shells, bone tools, millions
of stone artefacts the vestiges.

A small, brackish lagoon to the north
an unidentified waterhole
are home to a Dreamtime serpent,
habitat of swamp oak and paperbark.
Black swans, little pied cormorants
and white-faced herons nest here;
sand mining and vehicle access
deep wheel ruts and erosion
scars across the country.

All Cook saw was a primitive
aimless culture
naked bodies painted with
broad white stripes
slow wing-beats of a swan in curving flight
over the lagoon, a continuous series
of sand dunes and a land
inhabited by no one.

One of the finest animals I ever saw….his robe a clear jet black,
with the exception of his four feet, which seemed to have been
dropped in snow….also a white star on his breast.
− Matthew Flinders

Born on board Reliance, in the Southern
Indian Ocean, he took the captain’s eye,
the cat who walked by himself,
named for Tristram Shandy’s butler
but trim, like his master, or the sails
on a seaworthy ship, adjusted to suit the wind.


Falling overboard, he swam after the boat
scaling the ropes to safety, bravery rewarded
by a seat at Flinders’ table (sometimes swiping
tidbits from the forks of others).

Foregoing feline pursuits, he became a seasoned sailor
first mate and kindred spirit to the reckless,
star-crossed, and sometimes disagreeable captain:
My faithful intelligent Trim! The sporting, affectionate
and useful companion of my voyages.

from The Explorers’ Tree

If there really exists within our great continent a Sahara…great lakes…
or watered plains which might tempt men to build new cities, let us know
the character and promise of the land…”  – Rev. John Storie, August 1860.

A rousing farewell at Royal Park
we set off proudly for the Gulf country,
fourteen men, twenty-five camels, horses
and twenty tons of baggage,
aiming to fill in the great blank in the map
the ragged emptiness
like a hole in the night sky.

The camels gave us trouble from the beginning.
The horses cannot stand the smell of them
so our party advances in two straight lines,
Burke riding down the middle, his pistol cocked.
At the Darling River he disagrees
with second-in-command, George Landells
giving rum to the camels to calm them.
A shouting-match ensues, Burke smashes
every bottle of rum, Landells resigns
and Wills is promoted. They might have done well
to have drunk the rum. At base-camp Menindee
travelling now into the hot and dry interior
Burke quarrels with surgeon Herman Beckler.
By Cooper’s Creek, we’re down to four men, six camels,
dump much of our swag, for a mad dash to the Gulf.

A hard, slow slog through soft and rotten country,
sandy and stony in turns, arid scrub, occasional water-holes,
sparse pasture. Not even the triumph of reaching the sea,
only a tidal channel amid the mangrove swamps.
The return journey no better, severe storms, ground so boggy
the camels cannot walk on it, the torpor of stifling air.
Burke catches Gray eating stolen floury gruel
and thrashes him. He shoots the camel Boocha
then later his own horse Billy, and we eat our fill
as much as our stomachs can hold. Falling behind,
now tied to his camel’s saddle, in the trek
across Sturt’s Stony Desert under a blazing sun,
Gray dies. We scratch out a shallow grave and stagger
into an empty camp, the depot party gone.

Our deaths will rather be the result of mismanagement
of others, than of any rash acts of our own.
Coopers Creek, June 1861

And so we come to our explorers’ tree
the “dig” tree left by Brahe, a blaze on the trunk
a small supply of food, and the pleasing information
of their departure. What were they thinking of?
Encouraged by the sound of crows ahead,
the sight and smell of smoke, we start for
the blacks’ camp, thinking to live with them
learn their ways and manners, but they’ve moved on.
Reduced to starvation now on nardoo cake,
by no means unpleasant, but for the weakness felt,
I sense the darkness tumbling in…the silence of letting go.

Near daybreak, King sees a moon in the east, a haze
of light stretching up from it, declares it to be
quite as large as our own moon, and not dim at the edges.
I am so weak that any attempt to get a sight of it
was out of the question; but I think it must have been
Venus in the zodiacal light….


Nardoo is no fit food for white men.

In the city, in springtime, Anna steps out into drifts of hail the size of boulders, into floods and gale-force winds, and thinks of billions of tons of ice, flowing faster than snowfall replenishes. An iceberg breaks off from Ross ice shelf, and the Bay of Whales ceases to exist. Ice that trapped Shackleton and crushed his ship, the floes that proved impassable all melting now, faster and faster, locked into a process already begun. An extra five metres added to sea levels will mean submerged buildings and motorways, the coastline another Atlantis. Shackleton gave Frank Hurley his mittens, suffering frostbite himself, so the photographer could walk out into his frozen image, as though part of some vanishing point in another century.

Burning fossil fuels have already melted the first two sections of the Larsen ice shelf. Now the third and most massive section, an iceberg twice the size of Samoa, calves off  into the South Atlantic Ocean, shatters like safety glass. A century ago Carl Larsen, master of the Norwegian whaler Jason, sailed past that sculpted ice front from Cape Longing to Heard Island, stunned by its fringing bays. Anna decides she must see glaciers, before they all vanish.

She leaves on a cruise ship for Alaska, aware of the many differences between her journey and those others. Winter is rising, but the peaks of distant mountains are barely touched with white.  On the eighth day the ship approaches Hubbard Glacier which surges towards the gulf, blue beneath the waterline and just above it. Ice blue as blown glass or ammonite shell calves off like bubble-foam. Anna hears the glacier split, broken floes drifting by the boat, imagines a migration of fish, birds, mammals. When they dock at Ketchikan, she will buy a piece of ammonite shell as a memento.

On a rocky island nearby, sea-lions stretch out in the sun, as the world that survives grows smaller.