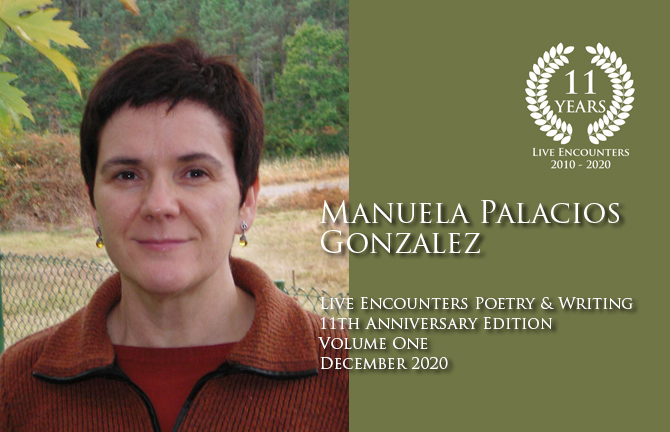 A glacial gust —
The Atlas girds the city with snow —
In a nineteenth-century photograph
the ochre ramparts cuddle
evergreen palm fronds ‒ the vast plain
fringed by the white-crowned range.
The frost subdued by roseate walls.
Dust, a harbinger of the encroaching desert.

Amina gets ready for a corner kick while
Mourad complains the ball never crossed
the line
Aicha, the goalie, shouts instructions
at her team’s defenders and
Mohammed gives his attackers the signal to
RUN!

Boys and girls in their teens
covered or unveiled
soccer their common goal
on the Essaouira sands.

Silis ‒ Arzila ‒ Asilah
lost and regained
time after time.
Through centuries, a craftsman
crouching in a dark gateway
illuminates pottery with vibrant pigments,
colour flowing now in a deluge over
walls, doors and windows with
cobalt, saffron, henna and mint.
Buttressed town of past daredevil
exploits now coquettish and welcoming
us, who stand by the Sidi Mansour dome
facing our shared ocean.

We quench our thirst with papaya juice
from Ali’s walled garden ‒
Asma’s congenial nest.
Fresh sap in our veins, the affable host
expounds on the medina’s wonders and woes,
guiding our steps.
Grandmother town of shed royal blood
you cherish the virtues of the caravansary ‒
robust, spacious, all-embracing site
of solace for the adventurous traveller.

As the story goes,
they were the daughters of a prosperous merchant
‒Fatima and Maryam‒
from ninth-century Kairouan.
The imbroglios of history led the family to Fes where,
learned and enterprising,
each sister founded a mosque ‒
Al-Qarawiyyin and Al-Andalusiyyin ‒
memorials of Arab inflow in Morocco.

As the story goes,
Fatima would only use the property’s
land to get the necessary sand, plaster and stone
for her mosque.

As the story goes,
Al-Qarawiyyin would soon become
a madrasa and, then, the first university in the world
hosting a bounty of librarians’ treasures.

Why should I want to dispute a story about
two wise, resourceful and honoured women?