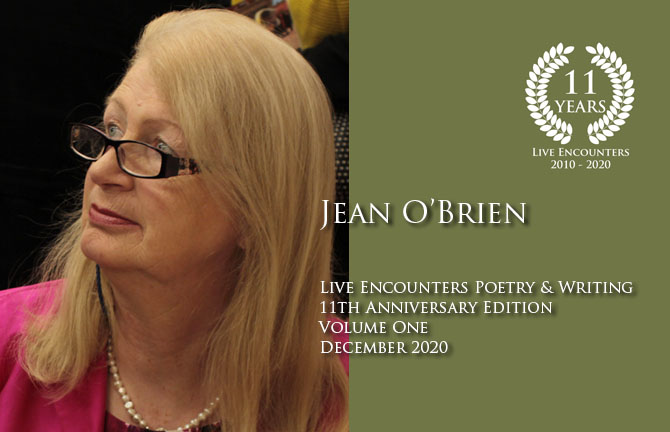 Jean O’Brien is working on her 6th poetry collection, which will be published by Salmon Poetry. She has won/ been placed in many competition and is regularly published both on-line and in print. Most recently she was involved in the past UK Poet Laureate Carol Ann Duffy’s project Write Where We Are Now. She holds an M.Phil from Trinity College and tutors in poetry/creative writing at University level.

I knew a man who died with his lungs
full of goldust, rich as Croesus
you might think, worthless to him
as it stole from his chest
much-needed breath.
It slowly killed him just as if
he had spent his days working
with asbestos instead of a precious
metal. Every ring he shaped,
every ingot or chain he fashioned
winded him, as unnoticed he breathed
the glittering dust in, its Troy weight
heavier than than his own breath.
The havoc of his heart reflected gold like
sunlight on a cornfield as it slowed.
Somewhere here is a warning
to be careful what you wish for;
sometimes the glittering prizes
are made malleable with alloy
and are full of shade and shadow.

Everyone is a little frayed about
the edges now and speaks in stuttering
sentences as if their tongues were rusty,
and like the world are now untrustworthy.
Our world and words are fractured, a badly
put together ransom note cut from mis-
matched newsprint, the out-of-kilter letters
in a crazy mosaic of differing
type sizes. We all feel ransomed, kidnapped
from our mundane lives by a rapacious
virus laying waste all before it. We
use arcane language and newly minted,
tell ourselves and one and other what we
will do. When all this is over. And long
for the hurly-burly of our old lives,
redemption our only grounding.


Philomela and her Sister

Scarlet thread rakes the frame from edge
to edge, a bloody flow, backlit with a cross-stitch
field of yellow rapeseed. A black cat is filled in
at the side of the frame where clamps hold the hoop
in place. Philomela chooses her silks and yarns
with care. Two sisters at a joint embroidery task,
something to while away the royal afternoon.

Poor Philomela has lost her tongue, some accident.
No one knows. She is an open mouth, a hollow cave.
Using back, knotted, chain and running stitches
to voice her anguish, plying her steel needle like a sword
to slash and rage, she threads the eye with pain,
fills the canvas with the lustre of her bitter tale, screams
at the injustice done in jagged lines of ravelling silk.

Until at last her sister understands, can read
the scene of her husband’s betrayal, how Philomela’s
brother-in-law raped her and after with her tongue
a telling swell in her mouth, he cut it out. She was left
a dumb weight of darkness pinned to a cloth.
The sisters, daughters of a king, unpicked all the stitches
and gathered up the coils and twists of jewelled yarn.

Distraught, they stitched azures, scarlet and burnt umbers,
slipped the knots of gravity, tuned into the call
of birds in their throats, shook out their new plumage
and took to air. Shape-shifting into passerines,
singing the lament of the nightingale, their wings and tails
trailing like loose threads they hauled themselves out
of earth’s despair and filled their eyes with shimmering sky.

*  based on part of the Greek myth of Philomela,  daughter of the king of Greece
who was raped by her sister’s husband King Tereus who cut out her tongue to silence her.