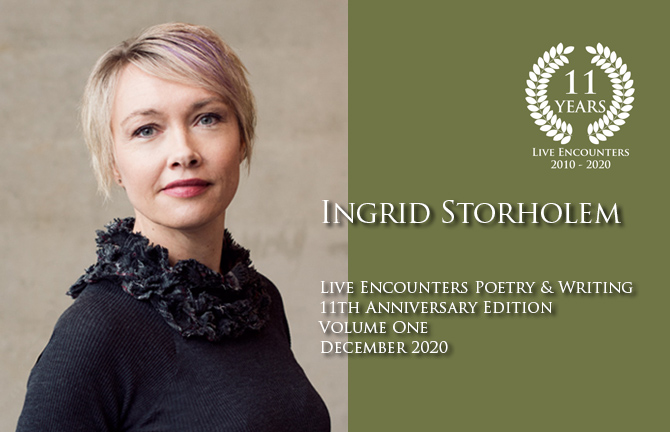 Ingrid Storholmen was born in Verdal, Norway, on 22 May 1976. She studied literature at the University of Bergen, and spent one year at a creative writing school. She was the literature editor of Morgenbladet, a culture newspaper in Norway. For five years, she was the writer-in-residence at ‘Adrianstua’, a writer’s house in Trondheim. She started the Trondheim International Literature Festival during her stay there, and also founded the literary magazine LUJ with two colleagues. She has published six books: The Law of the Poacher (2001, Shamespeesch); Graceland (2005); Siri’s Book (2007); Voices from Chernobyl (2009); To Praise Love (2011) published by Aschehoug in Oslo, Norway. Here Lies Tirpitz (2014). She has received many literary awards and prizes for her work, and her poetry has been translated into eighteen languages. Voices from Chernobyl bagged the Sult Prize 2010, and was shortlisted for the 2009 Critics’ Prize, the 2009 Brage Award and the 2009 Youth Critics’ Prize, the Sult award, and she was nominated to the world largest literary award for a single work published in English, the IMPAC Dublin Literary award, for “The Voices of Chernobyl”. Twice she has a three year long scholarship from the state of Norway, now she has got a five year scholarship from the Norwegian Writers union, and she has been reading at poetry festivals all over the world from Slovenia to India.

Translation from Norwegian by Kenneth Steven.

How much before death has sorrow begun?
Will death from now on be the eye I see my life with?

When death came, I crept into bed and lay down beside the child
I got the last warmth – I stole it for comfort

Your death is not my death. I cannot fathom it
One tiny hand completely alone, she waves, that hand

You will be in the living
With the living, I correct myself

In the end I open my mouth, call, I call, come home
Sorrow answers: I have lived, existed
Am loved Pain will be cut into ribbons of remembering, become thinner, it must be this way
but my motherhood stands over death’s own borders