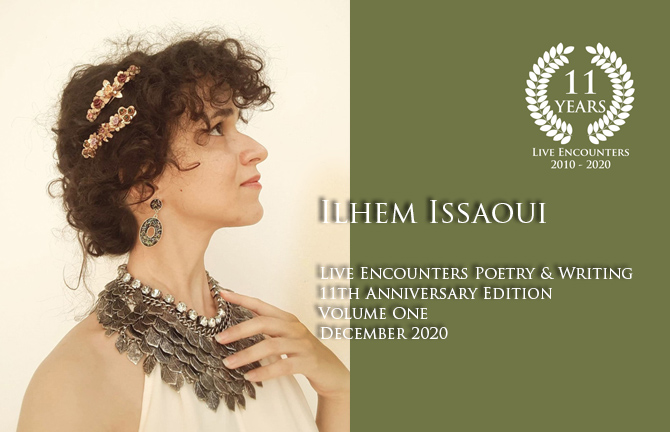 Ilhem Issaoui is a Tunisian researcher, poet, and translator. She has been published in many countries including the US, the UK, Canada, and India in print and online. She is in the process of publishing her second poetry collection.

I have a hole dug inside
And all those who fall, fall in
And the more I eat, the more I am hungry
Is it because I was starved?

To be loved, you tell me, is good
Good for what? I’d rather pain them
Not a sky in pink, nor summer, nor spring
I’d rather inhabit the woods

A morning with birds, but not crooning, only feathers
A day without bees but some honey was saved
A void that shouts and with teeth and claws commits suiphagy
What is missing?

It was all mere and kitschy impromptu trials
Until the last kid is to come
Preferably a tractable
Not a terrible one
One with a brain to trail along
And pluck its skeleton
And wears its skin
In front of people
But a brain that can’t make legs run
You know, to run: to grow,
To flee, to make a home
To know that, without, it can
That is not what they wanted
Not a terrible one
But one who looks through windows
Marvels at lemon trees and a false sky it won’t own
Nor call home

Every day I wait for the cake
As if it were the only sweet thing in the whole day
If I wake up early I pretend I am asleep
Until it is there
The mind demands it
And the amarulent mouth too
I let my mom let me miss the early morning
She closes the window shutters in mornings and nights
Whether it’s hot or cold
And goes to buy me the cake
And sits in the nearing room mumbling prayers
I am the one she never waits
I am always in the room
Nevertheless, she always checks and rechecks


All I wanted is to talk

Of anything
Of something else
Other than the past
Other than the future
Of things and roles
Of the present
That a cat ate all the birds
And now they are reduced and traduced
To mere feathers
And now mom doesn’t need to worry
About the birds’dirt
And now I have to endure my mornings without them
Of how unfit I am
For the job, the night, the relations
Of the void of the wells
And the pain of the body
That wants to just eat itself
With its desires half met
In an attempt to own itself
Of the lies that are not me
The braggadocio that I am
And the panjandrum hiding behind
And the cries I wanted to cry