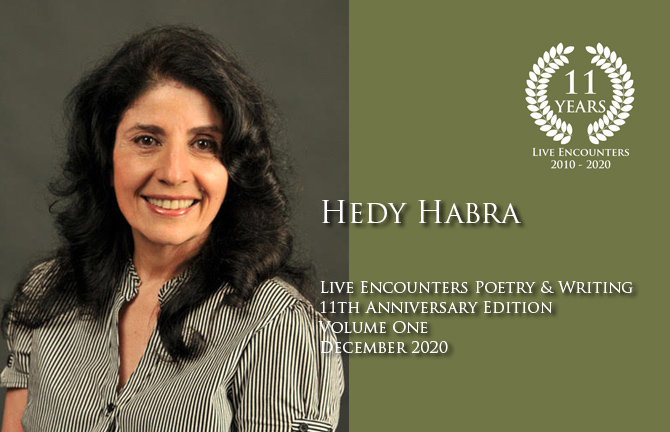 Hedy Habra is a poet, artist and essayist. She has authored three poetry collections, most recently, The Taste of the Earth (Press 53 2019), Winner of the Silver Nautilus Book Award, Honorable Mention for the Eric Hoffer Book Award, and Finalist for the Best Book Award. Tea in Heliopolis won the Best Book Award and Under Brushstrokes was finalist for the Best Book Award and the International Book Award. Her story collection, Flying Carpets, won the Arab American Book Award’s Honorable Mention and was finalist for the Eric Hoffer Award. Her book of criticism, Mundos alternos y artísticos en Vargas Llosa, examines the visual aspects of the Peruvian Nobel Prize Winner’s narrative. A fifteen-time nominee for the Pushcart Prize and Best of the net, and recipient of the Nazim Hikmet Award, her multilingual work appears in numerous journals and anthologies. https://www.hedyhabra.com/

On TV5, the French restaurant owner keeps
repeating: this is just another flu.
With a large smile, she presses
every newcomer against her generous bosom:
‘on se fait la bise,’
both planting a heavy smooch on each other’s cheek.


In Milan, my friends’ children flock to bars
and around the piazza while in Bangkok
monkeys invade the deserted streets.
In Chicago’s Shedd Aquarium, penguins freely
visit their neighbors through the glass exhibit,
pacing corridors like guards in formal attire
Dolphins and swans enjoy Venice’s transparent waters,
refuting the city’s legendary smell.


No planes threaten birds in flight nor the purity of the air.
Flowers grow on cracks, on walls, on the sidewalk.
The grass has never been greener.
An apocalyptic silence permeates large cities
and everything seems superfluous,
all the things on the to-do list can wait,
as long as we have our supplies,
as long as we’re sheltered.

We don’t know where it came from. We first thought the house needed ventilation. We later lit all sorts of scented candles, all to no avail. Each whiff made us dizzy and we became sensitive to every waft of air. The smell kept getting stronger but more elusive, ranging from a potpourri of spices and herbs to a mixture of dung and chemicals that made us want to throw up. It could be mistaken for sweet or foul pollen, depending upon the time of day, and it insidiously invaded all spaces. We started wondering why the smell carried memories, mostly deranging ones.

We decided to seal all doors and windows. We took turn in steaming pillows, sofas, rugs and most surfaces, then gradually retreated to a room not too distant from the kitchen. Lately,

we grew wary of calling friends or family, lest the smell would be carried by voices as though surfing over the radio waves. Even books became the repository of different odors. The moment we flip through any of its pages, a strange halo envelops us leaving us with shortness of breath. But at least we can turn the tv set on and drown within another world, preferably one without subtitles, the most foreign the language, the best since the smell is conveyed with meaning.

Or How Can Woven Whispers Be Deciphered?

After Women Against the Night by Helen Zughaib

What do such repetitive patterns mean,
inserted visual poems, wordless speech
lost in a scarf or a shawl, shaded emotions
hiding under every motif, inside every angle,
an echo of Philomela’s cries bursting in silence,
each colored thread telling of the outrage,
of a beauty flawed, of a body no longer hers,
of a tongue severed as a trembling stem.
See how carmine blood runs thick
between her thighs, down her throat,
suffocating her. Only deft fingers would feel
the softness or ruggedness of each fiber
and weave relentless nightmares, whispering
night after night against the darkness.


Life After the Insidious Crown’s Demise

People will learn sign language to communicate. Lovers will read mystical poems, eating each other with eyes: touching will only be permissible after a long hot shower while clothes get cleaned. Skin against skin will become a scarcity. After all, having once known the danger of kissing will forever dampen desire. Intimacy will be restricted to committed relationships and couples will avoid holding hands in public; they will learn to wait till they get home and wash their hands and faces.

Every public bench, bus seat, taxi seat or airplane seat will become suspicious and no one will go out without a special UV sanitizing device. At the office, no one will switch desks or use someone else’s computer without risking serious altercations. Affection will be demonstrated with artistry: glances will become more sophisticated, even a smile will have a number of oblique symbolic meanings.

Paper money will disappear and you’ll wipe clean your credit card after each use. Glove manufacturers will make a fortune, offering from transparent gloves to featherlike and softer than silk or to even the memory of a touch. But don’t worry, they will be available for every budget. People will start stroking their own heads and hair as they talk to their children and grandchildren who will automatically feel the warmth of their caress. Skin will be lonely and more sensitive, moisturizing lotions will become indispensable to avoid dry, aging hands.