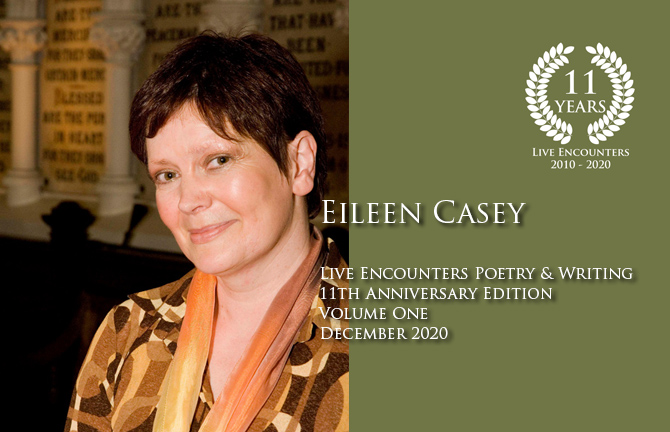 Poet, fiction writer, journalist, Eileen Casey was born in County Offaly, now based in South Dublin. Most recent poetry collection, ‘Berries for Singing Birds’ published October 2019 (Arlen House). Poetry is published widely in anthologies and journals by Dedalus, The Stinging Fly, The Nordic Irish Studies Journal, Poetry Ireland Review, Lisburn Linen Museum, The Moth, The Ulster Tatler Literary Miscellany, among others. Poetry awards include The Oliver Goldsmith International Prize, The Hanna Grealy Awards (Roscommon Libraries) and a Patrick and Katherine Kavanagh Fellowship, among others. Five poetry collections (including two in collaboration with Offaly Visual Artist Emma Barone) are published by Arlen House, New Island, AltEnts (Alternative Entertainments, Rua Red Arts Centre, Tallaght). ‘The Lea-Green Down’, a response anthology to the poetry of Patrick Kavanagh and featuring works from over 60 poets was published in 2018 by Casey’s small press Fiery Arrow. Currently working on a series of poems documenting her Stonemason heritage, an undertaking supported by Creative Ireland Support for Artists and County Offaly Arts.

My maiden name is Cordial. My father’s people were stonemasons and their people before them. The beautiful Georgian town of Birr has examples of their work. The long aisle of mosaic tiles in St Brendan’s Church was laid by my grandfather Robert Cordial. His first wife Kathleen was from Mullingar. – Eileen Cordial Casey

These poems are supported by  Creative Ireland and  Offaly County Arts Office.

His people might have been hatters, copper smiths,
labourers. Publicans, combers or bakers. Instead,
he was born into stonemasonry. His craft took him
outside the town, as far as Mullingar where he
worked on its grand cathedral. Met, then married
his first wife, bore five children with her;
nine followed with his second wife Elizabeth.
She outlived Robert by thirty-seven years,
his age when wedded for the second time.

He named my father Edward for a prince, Birr being
Parsonstown then, Offaly dubbed The King’s County.
He built opulent homes while his own small cottage
scarce large enough to house his growing brood.

My first sighting of him so many years later;
a tiny photograph, grainy window on the past.
Cement-splashed overalls, in his hand a trowel,
symbol of the stonemason’s trade. Primed and loaded,
ready to unite brick to brick with clean, graceful skims.

From the neck up, he’d pass for a gentleman,

handlebar moustache, fedora perched on his head.
A nod to the prince who made it popular.
Both were rarely seen without it.

Protection against all weathers,
It sheltered Grandfather’s head or hung on a coat
stand. Indentations in the felt, pinched by his fingers
in its putting on or taking off, made a pitched
shape like an arch. It softens his presence
in a world of stone. 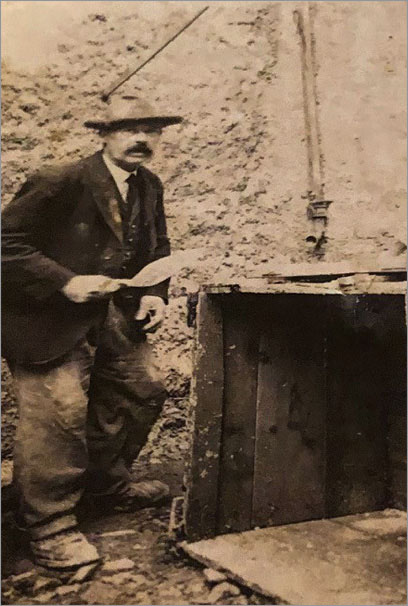 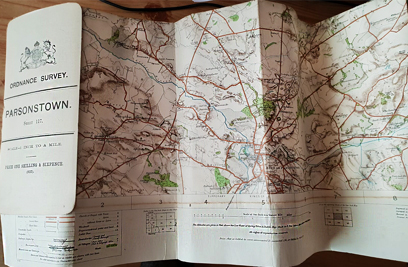 In buildings around the town, I sense their presence.
Chapped hands, weathered yet skilled, finely tuned
as any instrument. These men knew spirit level balance,
understood straight edge language. How to cut curbing.

Perfect poised keystones hold weights of time, place.
Arches formed by bricks neat as slices of cake,
gazed at by generations of children bearing
Cordial name. The old question echoes
through vaulted space: Who made the world?

I walk behind coffins too as years go by,
vision blurred by grief. Memory curves back,
opens pillared portals to where it once began.
Who made the world? A child was asked.
I knew the answer. Sylvester Cordial and his Masons.**

*a wedge-shaped element, typically a stone,
which is used in building an arch or vault.
** Sylvester and Robert recur frequently as the names of the Cordial male line.

He died on site, aged 74 years, Wednesday, 17th March.
Hedgerows brimmed with flower, swallows not yet
arrived to gather leaf and twig in familiar nesting places.

End of day, his work hours already in; an inquest
returned a verdict – disease of the heart,
Robert’s health threadbare as his work jacket.

A short paragraph in the Kings County Chronicle details
sons who worked alongside him, were there to mark
his passing. Noted: “The deceased was a respectable man
in his rank of life and was much regretted by his neighbours”.

There is no memorial where he died. Lasting monuments
instead sculpt the town. In arches, pillars and portals.

Employed by Mr Theophilus Wallace, both graves
lie almost side by side in Birr cemetery. Robert’s grave
sheltered by Cypress trees, his stone plain and faded;
unlike his employer’s ornate curlicues, Victorian
grandeur. Twists and turns of fate.

Great grandfather breathed his last, Vienna
and Berlin in revolt, Ireland in the throes of famine.
His skill saved his family from the workhouse.

Ashen faced, his chisel slipped from his fingers,
cement splattered skin already hardening to stone
while his wife prepared a meal, awaited his return.