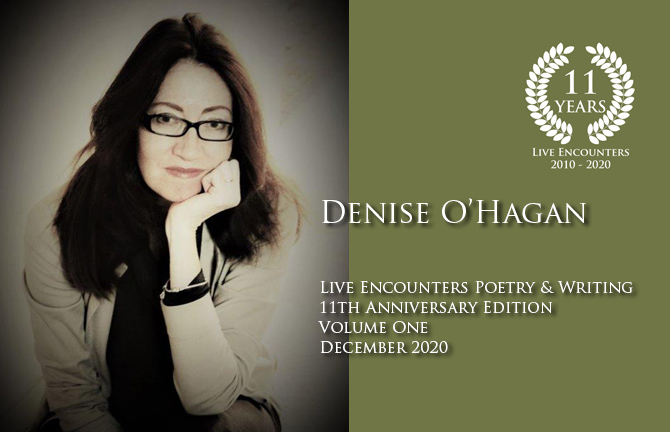 Denise O’Hagan was born in Rome and lives in Sydney. She has a background in commercial book publishing, works as an editor through her own imprint Black Quill Press, and is Poetry Editor for Australia/New Zealand for Irish literary journal The Blue Nib. Her poetry is published widely and has received numerous awards. Her debut poetry collection, The Beating Heart, is published by Ginninderra Press (2020). https://denise-ohagan.com/

It was just short of midnight, but when he breathed the air had thickened
like custard, with that middle-of-the-night consistency. He flicked the
bedside lamp off, and lay listening to the rain fall and the squelch of
passing tyres up and down the high street, watching pinpricks of light
seep through the weave of the curtains – was that streetlamp ever turned
off? He wondered if he would die in this adoptive city of his, the city that
never slept, home to a thousand orphans. But night-time was not for
thinking, not at his age. He turned over, folding himself up in blankets
and memories so as not to wake his wife, wondering at the darkening at
the window as the dancing dots of light were extinguished and a fan of
cool air brushed him alert again. He caught the black outline of a cape
before he heard the voice, and it seemed to him then that the moment had
been coming for a long, long time, the knowledge of it nestling in his
very bones. His shaking hand reached for his pills, his flailing spirit for
fragments of prayer. And with the turning of the cape, he caught the
scythe lowering and the dropping of words hard as pebbles, ‘You’re
right, it’s not your time yet,’ and remembered no more until his wife was
standing over him, orange juice in hand, and worry clouding her eyes.
‘Really, you’ve got to be more careful, dear. You must have left the
window open – we could have caught our death of cold last night!’

I Walk on Seashells

I walk on seashells, I walk on oyster shells
And tread the fine-grained sand between,
Gaze at the rippling water’s pearly sheen
Stretching to waterfront lawns of grand hotels,
The ebb and flow of the tide, the swells,
And wonder again what might have been.
For I lost it all, yet still I dream
Of castles, bells and citadels.
I gather my skirts, hold my head up high:
He bruised my body but not my mind,
My penurious family turned a blind eye
Pray tell me, on whom could I rely?
My husband is seen as wealthy and kind –
But I’d rather the boarding house nearby!

He was in Lima
When the tremors came.
Instinct saw him
Pyjama’d and spread-eagled
In a hotel doorframe
Watching the world tilt.

Chairs and table
Shuddered across the floor,
The lamp swung low
Skewed as a broken limb.
Dry-mouthed,
He witnessed the collision
Of a glass of water
With a littered floor,
Its fragments pooling
To multi-stringed cries,
Cut through by
A child’s thin shriek:
The raw twang of fear.

He hardly noticed
He’d been holding his breath,
That on the cusp of chaos
The tremors had ceased
The furniture stilled
And the corridor echoed with
Moans for what might have been.

Slow tremor was felt back home,
A coin spinning slowly through pale air:
Reverberations of another kind.
In a room far away a receiver clicked,
I pulled up my grey school socks
And let out my breath
As my small world buckled
And I brushed the far reaches
Of possibilities, and
My father’s mortality.

Note: On 9 November 1974, at 7.59 am local time, Lima, capital of Peru, experienced an aftershock of one of the largest of its many earthquakes which had occurred just over a month previously, and had left 78 dead and 2400 injured.