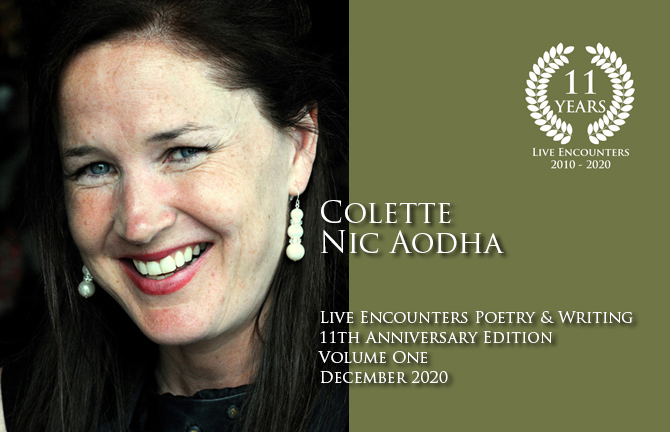 Colette is an award winning poet who resides in Galway in the West of Ireland. She writes in both Irish and English. She has fifteen publications which include a volume of short stories, Ádh Mór, as well as an academic study of the blind poet Anthony Raftery, an 18th century bard whose songs and poems are still recited and sung today. She has one volume of English poetry, Sundial, which was published by Arlen House Press, She also has two dual language collections of poetry by the same publisher; Between Curses: Bainne Géar , and In Castlewood: An Ghaoth Aduaidh. Her work is on the syllabus in Primary, Secondary and Third Level colleges. Colette’s latest collection (bilingual) is titled Bainne Géár: Sour Milk,which is available in hardback and softback, published by Arlen House, 2016. : Colette is pursuing a PhD in the English department of NUI Galway; she also has a master’s degree in modern Irish. Her newly published collection of Irish language poetry and art is entitled Réabhlóideach is published by Coiscéim, Dublin, 2020.

Not less than coincidence
this month of November,
the month of Adam and Eve
in the calendar of Islam, and I here with you.

You turn towards the tree
that is mentioned in the Book,
tempting fate, watching your every move,
I pray to their holy scripture

on my knees. The hand of time,
confessions of skin on skin,
silent notes on repeat
guide like a star as I journey East.

I worried our house
had a floor of sand
but as days passed
I felt a touch of stone,

much too close to the edge,
I considered your brazenness,
the invitation to build,
looked down at my feet of sand.

You forwarded an architect’s plan,
I sketched its outline
with a pencil of graphite,
theb buried it deep in the shale.

I dive into deepest blue;
Caragh lake and Lough Guitane,
when you hold me in your gaze so true
this unrequited love knows pain
of parting keener than the agony of Finn as he waved farewell to his only son
at Glenbeigh when Oisín was under Niamh’s enchantment;
he went with her to Tír na nÓg, Niamh Chinn Óir, the golden haired one.
O fair-haired would-be lover I wish to implore you under crescent
moon to move soft and low over this unexpected declaration,
secret me with you in dreams as you traverse the Connor Pass.
I treasure memories of you, your tenderness towards your brother’s children
who still live in the land of Ciar, domain of the son of Fergus.


In your absence I search for you in the still turquoise of Orbsen,
waiting to betroth you with aquamarines and this love song.

This morning I cannot find Gerard Murphy’s translations
of old Irish lyrics  and my internal organs begin to slowly collapse,
I can neither stand or sit, walk or lie down, something is gnawing at the pit
of my existence,  I have to settle for Paul Muldoon and a breakfast of my discontent.  Definitely breakfast and not brunch, in fact I haven’t had a brunch for longer than I care to admit. The handsome artisan that I am having an affair with is far too busy and besides….

I should have thought of it years ago… married men… they never stick around long enough to get on your nerves and what is more they tell you  the latest trend in holidaying  (by the lakes in Finland)…….good luck and have a lovely trip.
New kids starting new schools (that they may have a long and fruitful education
and be brimming with the blessings of God….. Oh, not my God darling, your own gods…..                               I wouldn’t wish mine on anyone……

To put the tin hat on things my turntable has come to a full stop and not even the mellowing strains of Dave Brubeck,  who I always leave out for such emergencies, can soothe me out of my lost volume…Muldoon it is as my boiled egg cools and it is  with great reluctance  I start on One Thousand Things Worth Knowing, ( signed Galway 2015, his usual scrawl) forearmed with the knowledge that I can reacquaint myself with King Guaire and his brother Marban, whom I dearly miss ( I’m pretty sure there should be a fada over the ‘a’ in Marban            but as they probably don’t have fadas in America and since I can’t find my Murphy I’ll let that one pass)

I secretly despise ( well maybe not so secretly)  inadequate regurgitation of medieval verse the way in which it is  smoothed out,  that which is ragged and rough with beauty….

I Linger for a moment on the cover image of a lookout post on the Armagh hills   and wonder if the vantage point is Sliabh Gullion or who knows what it is to drive the Concession road with a gun to your head….. while attempting to count your life in passing trees…

It has been a while   since such tin assemblies vanished………….. Replaced with booby traps on propaganda posters, desecration of graveyards, more savage forms of assassination like a crow bar down the throat or bog drownings, dissection and maiming by four wheel drive vehicles…..and other collections of close narratives which makes me yearn for the innocence of bullets.