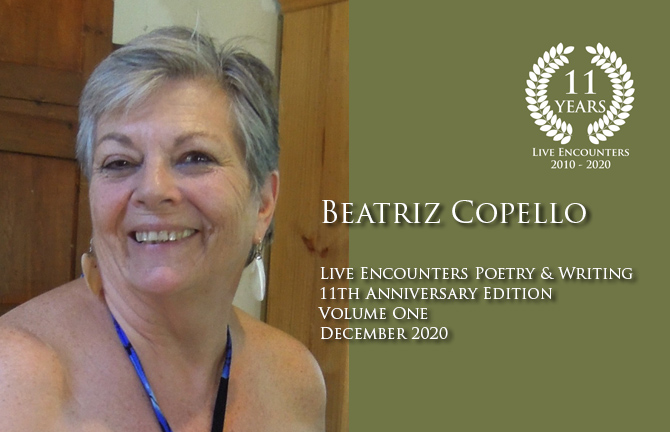 Dr Beatriz Copello, is a former member of NSW Writers Centre Management Committee, writes poetry, reviews, fiction and plays. Beatriz’s poetry has been published in literary journals such as Southerly and Australian Women’s Book Review and in many other publications and anthologies in Australia and overseas in English and Spanish.  She has read her poetry at events organised by the Sydney Writers Festival, the NSW Writers Centre, the Multicultural Arts Alliance, Refugee Week Committee, Humboldt University (USA), Ubud (Bali) Writers Festival.

scared of them
he wants to pray but how?
anchored to his shoes there is one metal ball

salacious mind orgasms
a stick that writes on sand
inventions plus madness, poverty and loneliness

he wakes up
the nightmare left like his pigeons
but what is left? Electricity energy and the magic numbers 369.

A universe hidden in your palm
power ingrained in your cells
Who are you blaming destroyer?
Ignorant of our fears you immolate
the innocent as well as the rebel.
Universal joke your power
to create miracles. Blessings
to the hens who lay eggs
and the roosters who sing
when the sun rises in the horizon.
Predictability of protons, neutrons
or light travelling through empty space.
Like an oyster living in a hard shell
shamelessly you hid our inheritance
in one of the pockets of your robe.

Morning glory honeysuckle
Convolvulus Lonicera
kisses and cuddles
awakenings of the souls
embraces of the minds
the radio is playing Mahler.
A tea would be nice
for the rested bodies.
The dogs are running
up down the corridor
they also want their meal,
and the sun dances
in the front garden
waiting for Godot.