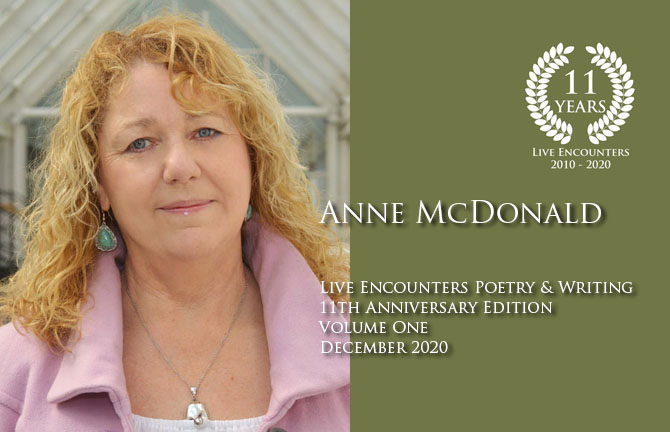 Anne McDonald is a Dublin based spoken word poet, dramatist and creative writing teacher whose work is centered on the challenges we face in a society that is changing rapidly and how we respond or react to those changes. Through her writing she explores themes of parenthood, aging, death, loss, inclusivity and response to the human condition, the changes to the political landscape in Ireland and the guttural reaction to those changes on a personal and societal level. She in interested in the power of enabling people who would otherwise not be considered “writers” to find ways to give voice to their own experience. She has had work published in Women’s News, Hot Press, Electric Acorn, Woman’s Work Anthologies 1 & 2, The Blue Nib, The Strokestown anthology and online journals and reviewed and broadcast on RTE Radio.Anne has an M.Phil in Creative Writing. Her first collection of poetry “Crow’s Book” is due out in October 2020.

Abebi stopped the elders at her cabin door
baying for her girl child to be cut,
her husband cracked her face with calloused hands
but she slammed the flimsy plywood door shut.
She tore the skin from her uncle’s forearm
when he tried to lift the child from a pallet bed,
her eyes red raw from crying, Abebi kicked
the still hot ashes from the grate into the faces
of the elders gathered at her garden gate.
The girl child asked “Mama, do they wait for me
Under the pomegranate tree?”

She screamed a string of litanies and hexes
As they waited with their dull edged rusty blade,
and other sister mothers carrying babies
gathered whispering softly in the midday shade,
then screeched their worries into the ink black night
that Abebi’s actions with the girl child would invite
back luck and her daughter should prepare
for a life of barren spinster hood, Adebi didn’t care.
Still she saw them gather round
when the dawn broke on the sun parched dusty ground.
The girl child asked “Mama, do they wait for me
Under the pomegranate tree?”


The girl child gripped gripped Abebi’s skirts,
when she heard the drums and pleading in the sun
from the husband and the family and the women
of the village, worried that the harvest tillage
would be failed and curses would be railed down
from angry Gods and prospective husbands.
The girl child said “I know what you have done for me
As I will do for mine, hold fast now Mama”
And the girl child asked “Mama, do you think we are free?
No more the pomegranate tree?”

I didn’t see the slap coming
when it cracked my jaw and stung my skin
I spilled the milk and watched helpless
as it bled white seeping stains on red Formica.

I couldn’t understand
all I did was say what you had said,
I thought that it was funny,
you said Granny was a “nosey bitch”
my face burned welt red.

I suppose you didn’t realize that the granny
was standing at the back door,
and if I was wise I would have kept my mouth shut
eyes fixed firmly on the kitchen floor.

But I was five and salt tears of shame
at some unfathomable misunderstanding
came thick and fast,
I tried to focus on the plate,
wells of water blurred my vision
as Angelus eighteen peals of purgatory
blared from the television.

In bed at night at twelve years old
I dreamed of leaving, my chest cracked sore
with heaving sobs, but I didn’t know
that you were grieving
for a dead baby.

Maybe if I’d known I might have stayed
until the cord was ready to be cut,
but at seventeen me and Janis Ian went
on a J One visa to the states,
the slap still stinging on my face,
and pulled the back door shut.

Was St. Brigid Jesus’s girlfriend Mammy?
-She was not son, sure we don’t even know
who Jesus really was,
he could have been a leprechaun.

Or a woman Mammy?
-Don’t say that! He was a man,
look at him in your book!
But he is wearing a dress and he has long hair Mammy

-I don’t care, he was a man
and he lived in Nazareth
it says so in your book, look!
Anyway he has a beard.

If today is St. Brigid’s day,
when is Jesus’s Day Mammy?
-That’s Christmas,
do you not know anything?

Where is he now?
Is he dead like they said Mammy?
Where is he now if he lives forever?
-He is everywhere and he can hear you
pestering me with all your questions.

If he is everywhere, where does he sleep Mammy?
-He never sleeps, I don’t think.
I can see you winking, so you’re lying Mammy
and that’s a sin.

-Get your bag, put that can in the bin.
we are going to be late.
Is Jesus in Baldoyle Industrial Estate?