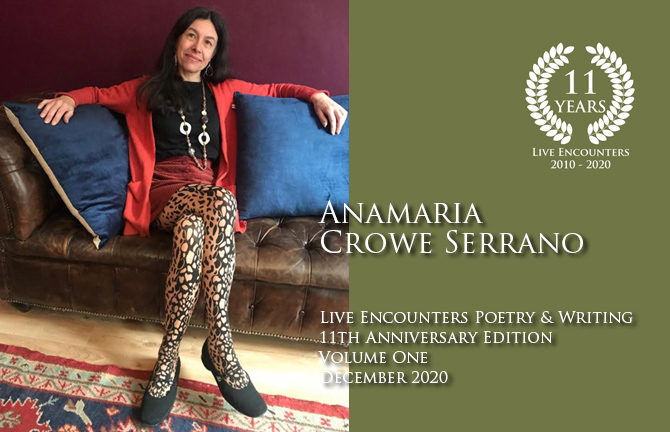 Anamaría Crowe Serrano has written poetry for many years, including Crunch (Turas Press, 2018) and onWords and upWords (Shearsman, 2016). For the past two years she has been working on a novel, In the Dark, set during the Spanish Civil War, which will be published in 2021 with Turas Press. Excerpts appeared in the April 2020 edition of Live Encounters.

Odds on Day One

There are five patients in the ward. They are very quiet. One is an invisible woman, Aunty, who has just been wheeled in. She’s beginning to come round and can’t respond yet to the nurse. A chart on her bedside is proof that she has a history. Facts are added to her existence and sometimes she groans a little. Her quietness makes her unremarkable.

The second is an elderly man. He is Hanku, half-human, half-cartoon character. His head is bandaged like a helmet strapped under the chin, but he is sitting up, stony-faced and grey, ready for discharge. On the phone he talks sweetly to his wife, maybe a lover, explaining that they went in behind the eye and the back of his head. She can come and collect him and his voice trails off.

The third is a woman who is pretending to be deaf. She’s the only one who hasn’t had an operation. She had an MRI ordeal. This ordeal is broadcast back to her by her daughter, who is skilled at fussing, seeking encouragement from the nurses, making a hero of her mother for having survived the day. Her mother wishes she had been anaesthetized like everyone else.

The fourth is another woman. She should sleep now, but she can only think of Lee and the trouble ahead. Surgery is nothing compared to this. The monitor reveals increased blood pressure but, thankfully, nurses are not trained to guess domestic reasons for increased blood pressure. She waits, consciously alone, hoping the tears will have stopped by the time the physio arrives.

The fifth patient inhabits a body that will never be the same again after surgery. Clinging to the lining of his lungs, there may or may not be another body. The doctors don’t know what the problem is. They haven’t considered it might bring the world to its knees. Flowing through his veins there may or may not be ovine serum. But he is fortunate. He will be leaving hospital soon. In a box.

He’s done it again. At the bathroom door, eyes popping, roaring in his underwear and stocking feet. Her heart sinks, unable to stop him. Unable to help.

Wazze meaning o’life? he slurs through mangled tongue, frothing at the nose. He can barely steady himself against the wall, striking out like a new-born giraffe, yet this is what he’s thinking: the meaning of life. He grins and gets distracted by invisible magic wafting in front of him. Woooaah, he marvels.

Psycho. The fragility of that. The pain.

Nobody knows the meaning of life, she says, hoping it registers in his tortured brain. Hoping it’s a comfort because somehow there is comfort in truth.

He stops lunging at her, suddenly puzzled. Jzozevhine? She says nothing, gauging his movements. Who’r’you?

When he was a toddler he disappeared once in the garden. The dishcloth hung in her hand as a sixth sense kicked in. Out she went and, sure enough, he was perched on the edge of the rainwater barrel, water seducing him with its murky reflections.

He still wants to slow it all down, see life as if for the first time, and not see. Disconnect from this world that is too brash for his sensitive soul. Had she not found him he’d have tipped in to touch that other world. Head first.

The scene replays in her mind these days, except that in her mind she stays indoors drying dishes while he dips his little fingers into the water, following the urge to explore its deeper meanings. Head first. A minute or two at most instead of this endless void he keeps trying to fill.

A teacup would have been enough. Or a plate.

How Far is One Meter

What was that like? Suk wants to know. Aunty, I can’t see you.

Aunty shifts so she fills the screen again. Every night she tells Suk a story from the past. So that Suk will be ready for life in the past if things ever return to normal. But she worries that the past may be too long ago to ever come back.

School, Aunty repeats. It was a big building—

Yes, like a hospital or a prison, full of children wearing the same clothes.

Matching, yes, but not like law enforcers. Aunty laughs. It was just a uniform so that their home clothes wouldn’t get spoiled. And we had to bring books with us to school.

Aunty sighs. Things made with paper, she explains, lots of sheets of paper stuck together along their long edge, with writing on the pages, stories and pictures and explanations about how to do maths and science. That kind of thing. Like lots of those digi-templates you use for edu except they were on paper and we brought them with us to the classroom—

They sat together in one room?

Yes, that’s exactly what they did, Aunty smiles. Side by side. Touching distance. There was no distance enforcement back then. They could share pencils and sometimes, when the teacher wasn’t looking, they might whisper in each other’s…

Aunty, the battery is running low. Hurry up with the story.

During break time we walked around the yard—

No, not like prisoners. Well, maybe a little bit, but we hadn’t committed any crime. We were just there to learn. So we’d walk around telling each other our secrets, who we fancied and who we wanted to hook up with in the club at the weekend.

Suk opens her mouth to ask, but Aunty clarifies before she can formulate the question. Lots of young people your age dancing really close together. Not just family members. Friends and strangers. Less than a meter, yes, like in the old shops I told you about. Sometimes holding each other. Their bodies rubbing off each other without even meaning to.

Aunty looks at the screen. All she can see is a head, Suk’s eyes are popping again. She always finds this unbelievable. Yes, skin touching.

Were they not arrested?

Suk has only ever sat on her own in her room communicating virtually with the education network. She has many friends on the network but has never even considered touching any of them. Why would anyone want to do that? When edu is over for the day they sometimes put on their goggles and cyberlink together in virtual reality to old-style shops like Aunty has described really existed. They sometimes bump into each other in RetroLife if they are looking somewhere else –it’s allowed in RetroLife– but it’s not for real and it’s still embarrassing when that happens. They go into shops that sell the kind of stuff you’d normally cyberbuy. Loads of people can go into shops and as you go through the door the BuyMe selects what they need or might like. Items float by in front of their eyes, whether it’s an edible treat or an item of clothing or accessories. Sometimes, for fun, instead of letting the wristchip register automatically for autopay on the way out, they go to a box thing called a till where there’s someone just standing there waiting for them to arrive. The tiller knows what they have selected and says that will be…whatever the cost of the item is, and they can present the amount with little chips or bits of paper that have a monetary value written on them. They’re called coins and notes because RetroLife is pretty close to what real life was like in Aunty’s day. It’s hilarious to keep everyone waiting while this transaction goes on. Even the friends who are waiting always find it funny that time could be wasted in such a silly way but Aunty says that is exactly what used to happen in the past and there was nothing funny about it. Money was a real thing that you carried in a thing called a purse and people waited in a line in shops. No, not because they were desperate for the items. Most of the items they didn’t even need. That was just the way it was.

Aunty laughs. No, she says, there was nothing to be afraid of if you casually bumped into other people. She goes suddenly quiet, looking at Suk. Normality boils down to our experience, she thinks. The rest is strange. Suspect. Comical.

Are you crying, Aunty?

No, love. Aunty brings her hand to her face. I just have something in my eye. I’d better say goodnight. Your battery is about to go.

Will you tell me more tomorrow about school and cubs?