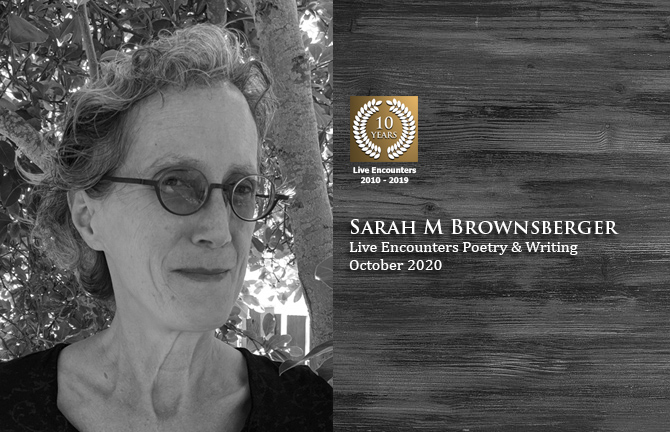 Sarah M. Brownsberger’s poetry has appeared in Salamander, The Scores, Verse Daily, The Hudson Review, Field, and many other journals. She works as an Icelandic-English translator of literature and art criticism. Her research on the relationship between poetic form and economic change is summarized in the essay, “Poetry, Hunger, and Electric Lights: Lessons from Iceland on Poetry and Its Audience,” which appeared in The Cambridge Quarterly in 2015. A sampling of her work can be found at sarahbrownsberger.com.

Property in a Lava Field

This lot that offers sorrel
and forget-me-nots was dozed
in modern times, the Great
Depression, the machines
a dire debt, gasoline
costly here, cigarette butts
crumbled into pipe bowls, the ash
used as snuff. The house was built
on poured concrete, but the yard

was rubble rock. Over time,
people strewed it with refuse—
moldy hay, dung, and slag—
and harrowed a lawn from that;
but while decades make up lifespans
solid ground requires eons.
Drophammers can’t break faults;
intention reckons narrowly.

I can sun myself on this plot only while
it bears my name in a ledger book
or in characters made of light.

even lichen dies in
wind that with a long sigh

snaps the ground like a sheet
so sand and loose rock fly;

nothing huddles under,
nothing scans from on high

rubble basalt and its
scourings trickling down and

out below a churn of
turquoise surf from cliff roots.

No boy was sent across
to trade yeanlings for grain;

the people to the east
lived and died hemmed in by

the sea and this moraine;
but once by its rim, lost

between sheiling and home
in spring snow, a girl felt

a tug at her leather
cape and turned to see a

grinning fox; no matter
how she cursed or shouted

it kept coming at her
slavering, whining, snapping,

until, out of the blind
storm, the farm dog bounded.

My memory has been erased
by a giant sponge of light

Snipes fluttertongue, run sticks along
the fence of my senses

To attend these revels one must remit
judgement to the Sun

At first it was fun, skittering
like spiders over twisted scrap,
gathering loads for the crane,
pallets sailing through the air,
the water below rough as slag.

This was in Olafsfjord, a crack
in black rock where the arctic sun
coils, steaming, under the dock.
We had not slept, had had rough seas
coming home from Arkhangelsk.

For years I’ve had a trick shoulder,
can’t trust it, and this was ill–
legal—the pallets, the clambering.
The creak of the cables began
to wear on us. Our gloves slipped,

sweat blurred our eyes and haloed
everything; snow-melt roped
off cliffs; the ocean roared
but the gulls were silent; time
felt pinched; I felt the Norn’s hand

poised to grab, felt my arm give,
air underfoot, saw my jacket
buoy me, crushed in the rockweed—but
no: As beads of mercury join,
glints of silver hair, skin, eyes combined
into Aunt Jódís. ‘Careful!’ she said,
as if this were childhood and she

were alive. She braced my back
with both palms and moved with me
as I kept working. She said,

‘We think it’s better this way.’
Not till over our pints that night
did I confess, I had almost died.
No one laughed and I heard them wonder,
Who was ‘we’ and did ‘we’ decide?