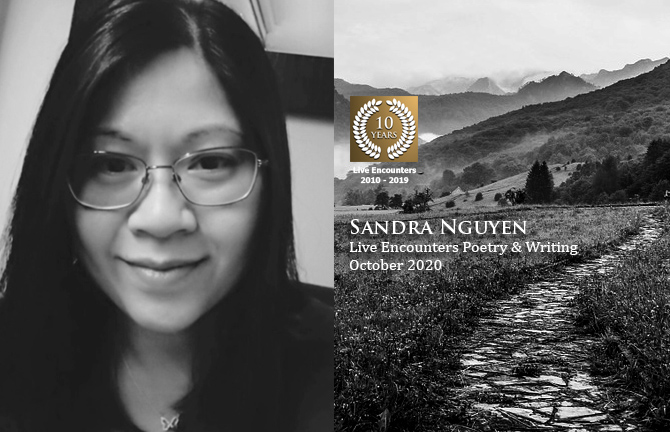 Sandra Nguyen was born in Vietnam and raised in Sweden. She found her passion for writing when she lived in the United States. She writers short stories and poetry. Her work has been featured in anthologies as well as in online publications. She lives and writes in Sweden. You can follow her writing journey here: https://www.thetopazjournal.com/

A thin deposit of small white ice crystals formed on the ground. The frost had found its way up to the tree branches. Everything seemed quieter, almost muffled, against the pure white landscape that spread as far as my eyes could see. Every step I took left a fresh, crisp footprint in the snow. I hunched my back and pulled the scarf tighter to prevent the biting wind from seeping under my skin, as I fought my way through the cloud of white dust the wind had stirred up. I was cold, lost, and alone, and it was too easy to just cave in and give up.

A desperate howl of the wild made me squint. Past the dusty illusions of light, I saw a faint silvery shadow approaching me. The shadow grew larger and soon it took the shape of a great silver wolf. An overwhelming fear washed over me as the distance between us cut shorter. It was too late to hide. The wolf had seen me. My breath was strained in the numbing air. If I could cry, my eyes would have produced tiny drops of frozen crystals. But I did cry, on the inside. I wanted to live. I wanted to be surrounded by people. This could not be the end of my life, to die alone, in the wilderness.

Unmoved by my petty plea, the wolf trod the frozen landscape with pride. Its eyes were locked into mine. Another howl of the wild sent shivers down my spine and made my bones tremble. The pack was calling. I held my breath as the wolf stopped in front of me. The distance between us was about three leaps.

“Go ahead, call your pack. Let’s get it over and done with,” I said with a shaky voice. I knew wolves live and hunt in packs. The wolf let out a low growl and strode past me. When it saw I had not moved from my spot, it turned around and nuzzled me to keep moving forward.

I realized that no one is ever coming to rescue me. At the end of the day, the lone wolf was my only companion, and if I want to survive the wilderness I have to accept the change. In silence, side by side, we explored uncharted territories. As we strode through the frozen landscape and clouds of dusty white, I glanced at the great silver wolf and came to think of what people used to say: every cloud has a silver lining. It had never occurred to me that embracing the company of a lone wolf would make me feel at home. A smile escaped me. I was not cold, lost or alone anymore.