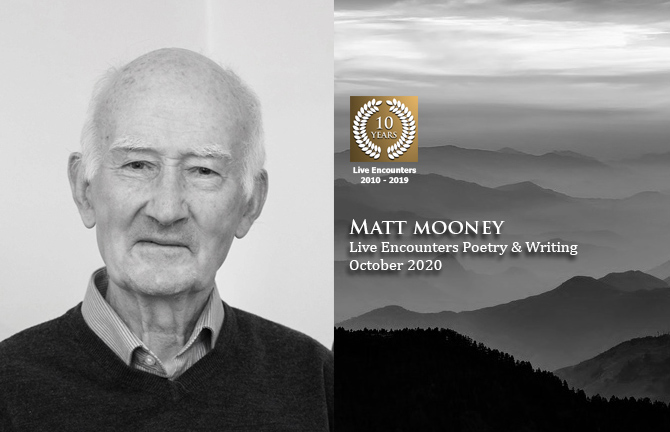 Matt Mooney was born in Kilchreest, Co. Galway in 1943, he has lived in Listowel since 1966. His four collections of poems are: Droving (2003), Falling Apples (2010), Earth to Earth (2015) and The Singing Woods (2017). Winner of The Pádraig Liath Ó Conchubhair Award 2019. (Filíocht/Poetry). Poems published in: The Amaravati International Poetic Prism Anthology 2018 and 2019,  The Galway Review online and Anthologies, The Blue Nib, Feasta, First Cut, West 47, Striking a Cord (Anthology), The Applicant, Poetry Breakfast, The Galway Advertiser (Peann agus Pár). Poems on the Edge, the Connacht Tribune, The Kerryman and The Irish Independent. Copy Editor and Reviewer for The Galway Review literary magazine online. One of his poems appears on the syllabus of a number of UK Primary Schools. Some of his poems have been read on: RTE Radio, Wired FM, Radio Kerry.

The turf-fire burned away our young years
Tommy, since after sunset you came over
the stone wall stile between our haggards.
Up in smoke, up our Santa Claus chimney,
the never-dying fire on a wide open hearth,
raked with ashes every night going to bed –
and it was late when your yarns were spun.
You were a soldier of the States on the run,
deserter of your post in Germany, at home,
your yankee drawl enthralling us, all agog –
excited to have our neighbourly adventurer
bringing us the world beyond our daily lives.
As intriguing to us as a parcel from America
opened with wide-eyed wonder on the floor
in the West of Ireland in the nineteen fifties.
In a photo you wore a sombrero on a stool,
with pencil moustache, drooping cigarette,
playing your guitar: your esprit de vie to me.

A special Sunday afternoon has gone
and now we sit outside at tables
supping tea and drinks together
among family and friends,
flanked by Comfrey Cottage
facing Courtmacsherry Harbour
day and night, tide in tide out.
Kinsale Bay beyond Woodpoint
and in between a long sandbar,
raised from every ebb and flow,
where two silhouettes stroll.

The keen of a curlew,
echoes of distant callow sounds
embedded in my head,
many global spins ago,
of seas and shallows, hills and hollows,
turning on its axis, furrowing the future,
turning its back on all that was
for the sake of future generations.


Today a christening and a barbecue
marked a new beginning,
the advent of another heir to all the earth.

Now the eyelids of the night drop slowly
while stars still shy appear
from high above over the harbour lights.

Contentedly I shaved
before the mirror
on a cruise liner
on the Baltic Sea
and remembered how
my father loved it
when I did the same
for him on Saturdays
in his latter years
with his Philishave,
while he followed
the scything run
of his shaver,
smiling satisfaction
in that old mirror
by the front window
above the table,
directing the operation
with odd grimaces,
making comic faces
easing the razor’s route;
a gang of garden roses
looking in to boast
of their brilliance
from flower passion
spent by my mother;
flashes of passers by
arousing our curiosity
on our country road,
through the Leylandii;


Now I see his contours
in mine from the years
it’s taken to be like him,
cruising to Copenhagen.